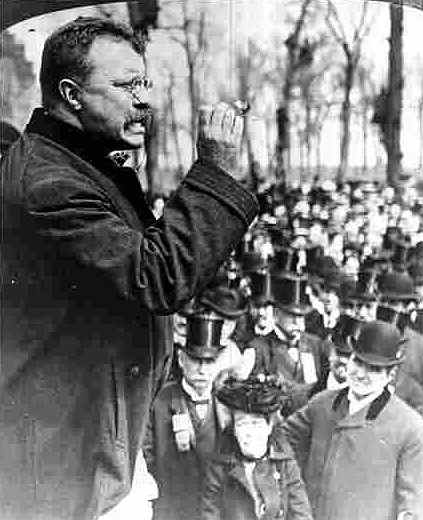 I wish to preach, not the doctrine of ignoble ease, but the doctrine of the strenuous life, the life of toil and effort, of labor and strife; to preach that highest form of success which comes, not to the man who desires mere easy peace, but to the man who does not shrink from danger, from hardship, or from bitter toil, and who out of these wins the splendid ultimate triumph. – Theodore Roosevelt

In our last post, we discussed the way Theodore Roosevelt threw off his sickly nature and through willpower and hard work became a strapping young man. His dedication to living “the strenuous life” became the guiding principle of his life.

His hard work and enthusiasm allowed him to accomplish all of the following things during his 60 years of life:

2. Own and work a ranch in the Dakotas

3. Serve as Assistant Secretary of the Navy

4. Fight as a Rough Rider in the Spanish-American War

5. Serve as President for two terms, then run for an unprecedented third term

6. Become the first President to leave the country during his term in order to see the building of the Panama Canal

8. Read tens of thousands of books-several a day in multiple languages

10. Discover, navigate, and be named after a completely uncharted Amazonian river over 625 miles long

11. Volunteer to lead a voluntary infantry unit into WWI at age 59.

In addition to all of these tangible accomplishments, Roosevelt infused vitality into every aspect of his life. He practically bounded from room to room, giving hearty handshakes, slapping backs, and grinning ear to ear. Even as he got involved in politics, he exercised regularly and took up boxing, tennis, hiking, rowing, polo, and horseback riding. As President he took visiting leaders and dignitaries on long hikes and up rock faces in the parks around DC. As governor of New York, he boxed with sparring partners several times a week, a practice he regularly continued as President until one blow detached his left retina, leaving him blind in that eye. Thereafter, he practiced jujutsu and continued his habit of skinny-dipping in the Potomac River during winter.

One of the best examples of Roosevelt’s unflagging enthusiasm came when he was campaigning for a third term as president. In Milwaukee, WI, he stood in the back of a railway car waving to the crowd. A man shot him in the chest, knocking him back into the car. Three presidents had been assassinated in his lifetime and TR had always prepared for such a moment. He put his fingers to his lips and since blood was not coming out of his mouth he knew the bullet hadn’t perforated his lung. The bullet, slowed by a steel eyeglasses case and a copy of a speech, lodged in his rib. Roosevelt insisted on proceeding to the auditorium where 10,000 people were waiting to hear his speech. Mounting the stage he showed the audience his bloody shirt and said:

“I have just been shot, but it takes more than that to kill a bull moose.”

TR then talked for 90 minutes, before finally consenting to be taken to a hospital.

Clearly, Theodore Roosevelt did not just spout platitudes about living the strenuous life; he absolutely embodied and lived the principles he espoused.

Why Live The Strenuous Life

The strenuous life gives you confidence

A mere life of ease is not in the end a very satisfactory life, and, above all, it is a life which ultimately unfits those who follow it for serious work in the world.

Taking on responsibility and overcoming challenges is the best way to increase your manly confidence. Don’s sit on your butt all day playing X Box. Get out of the house and look for challenge. That’s how TR built up his confidence. He actively sought hard tasks and took them on.

Start living the strenuous life today and increase your confidence by taking on a challenging goal. Do something that you have often thought about, but have never followed through with.

The strenuous life makes you a better husband and father

The man must be glad to do a man’s work, to dare and endure and to labor; to keep himself, and to keep those dependent upon him.

Sadly, many men are shirking the responsibilities of family. The strenuous life requires that you be the best husband and father you can be. Work so you can provide a comfortable living for those who depend on you. Give the emotional support your wife needs. Be an active participant in your children’s lives.

In the last analysis a healthy state can exist only when the men and women who make it up lead clean, vigorous, healthy lives; when the children are so trained that they shall endeavor, not to shirk difficulties, but to overcome them; not to seek ease, but to know how to wrest triumph from toil and risk.

Americans have gotten lazier and dumber. The success of a democratic republic like the United States depends on an educated and engaged citizenry. Sadly, most Americans don’t know what’s going on in the world, let alone their own country. Fewer American are engaged in their community. Shirking our civic duties will only make our country weaker.

Take on the challenge of being an engaged citizen. Keep up with current events not only in America, but also the rest of the world. And don’t just settle with watching the fluff news on Fox and CNN. Check out publications like The Economist or The Atlantic Monthly. They provide far more in-depth analysis of what’s going on in the world today. Also, get involved in your community. Attend town hall meetings. Join a civic group like the Rotary Club or a young professionals organization. Will it be hard to find time to do these things? Of course. But that’s what living the strenuous life is all about. Taking on challenges and overcoming them.

No country can long endure if its foundations are not laid deep in the material prosperity which comes from thrift, from business energy and enterprise, from hard, unsparing effort in the fields of industrial activity; but neither was any nation ever yet truly great if it relied upon material prosperity alone.

Overcoming the fear of failure and criticism

In your quest to live the strenuous life you will undoubtedly meet failure and criticism. Don’t let this hold you back from living the life of vigor. Failure and criticism are just obstacles for you to conquer as you seek to live a life of greatness. We leave you with a famous portion of TR’s speech, “The Man in the Arena.”

It is not the critic who counts; not the man who points out how the strong man stumbles, or where the doer of deeds could have done them better. The credit belongs to the man who is actually in the arena, whose face is marred by dust and sweat and blood; who strives valiantly; who errs, who comes short again and again, because there is no effort without error and shortcoming; but who does actually strive to do the deeds; who knows great enthusiasms, the great devotions; who spends himself in a worthy cause; who at the best knows in the end the triumph of high achievement, and who at the worst, if he fails, at least fails while daring greatly, so that his place shall never be with those cold and timid souls who neither know victory nor defeat.