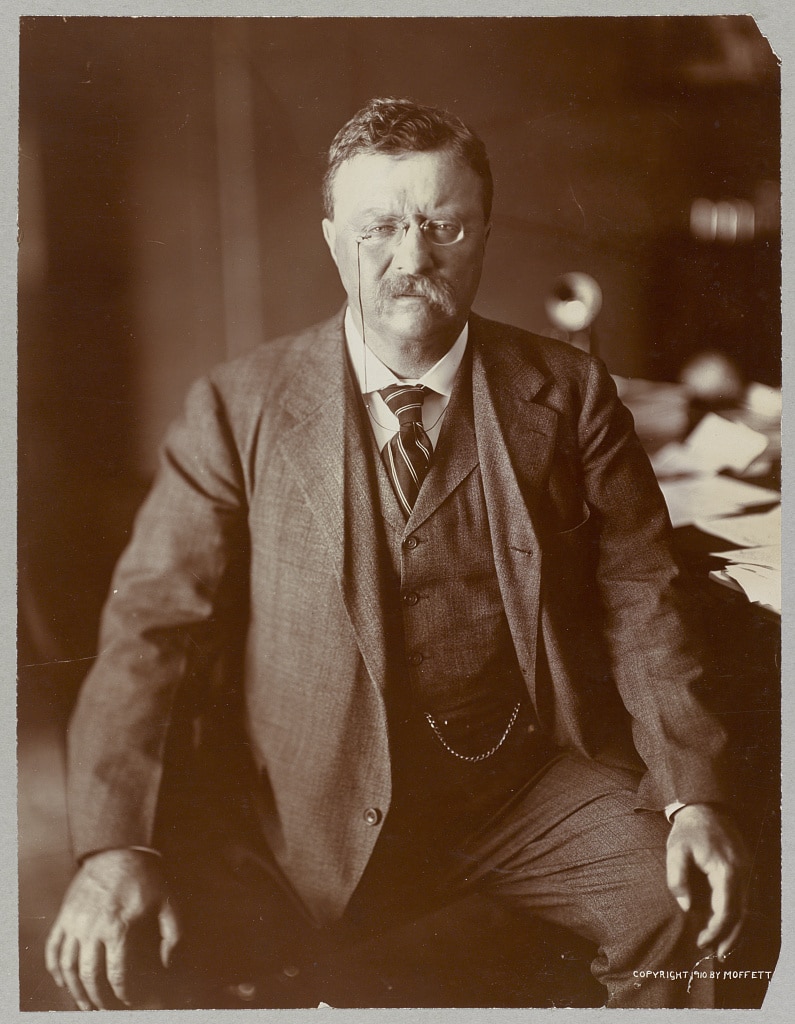 From an Address at San Bernardino, California
May 7, 1903
By Theodore Roosevelt

You do not win in a big fight by any patent device. There is not any way by which you can turn your hand and conquer in a time of great trial. You have got to conquer as your fathers and grandfathers conquered before you. You have got to conquer as strong men have conquered in every struggle of history, and draw on whatever fund of courage, of resolution, of hardihood, of iron will that you have at your command, and you can conquer only if you draw on just those qualities.

Another thing which you will remember very well, from ’61 to ’65, what my comrades here, the men who went into the great war and the men who went into the Spanish War or went to the Philippines will remember also, that there was a certain proportion of men who joined your ranks who for one reason or another fell by the wayside. There were different reasons—some for whom one simply felt an entirely respectful pity, who lacked the stamina to be able to stand the hard work, and it was mighty hard work. In the lesser war there was trouble that there was not in the big war, for there was not enough to go around. Among others the man would come around who wanted to be a hero right off, but did not want to do the other work of the moment. I recollect perfectly in my regiment, a young fellow joined, and on the second day he came to me and said: “Colonel, I came down here to fight for my country, and they are treating me like a serf, and making me dig kitchen sinks.” His Captain, who was a large man from New Mexico, explained to him that he would go right on and dig kitchen sinks; that that was what his business was at the moment, and that if he dug them well we would see to the hero business later. The man who did well in the army in those days was, as a rule, the man who did not wait to do well until something big occurred, but who did his duty just as his duty came, during the long marches, during the weary months of waiting in camp, did his duty just exactly as in the battle. He was the man on whom you relied, whom you trusted, whom you wanted to have with you in your troop, as your bunky, whatever it was, he was the man you wanted around.

It is just exactly the same with citizenship. It was just exactly the same in the pioneer days. The pioneers, men and women, faced much such difficulty as the men of the Grand Army, and for you, the men of that generation, and your wives, there was the same hardship, the same endurance of grinding toil, the same years of effort that too often seemed fruitless, the same iron will, and the same ultimate triumph, and if we are to succeed we must show the same qualities that the men of the Grand Army showed, that the pioneers showed, that all men and all women have showed who were fit to be fathers and mothers in a vigorous State.

I would plead with my countrymen to show not any special brilliancy, or special genius, but the ordinary humdrum commonplace qualities which in the aggregate spell success for the nation, and spell success for the individual. Remember that the chance to do the great heroic work may or may not come. If it does not come, then all that there can be to our credit is the faithful performance of every-day duty. That is all that most of us throughout our lives have the chance to do, and it is enough, because it is the beginning, because it means most for the Nation when done, and if the time for the showing of heroism does come you may guarantee that those who show it are most likely to be the people who have done their duty in average times as the occasion for doing the duty arose.