Many men are quick to buy the newest book from their favorite business leader or sports hero. From the late Stephen Covey (a personal favorite of Brett and mine) to former NFL coach Tony Dungy, there is a seemingly infinite variety of modern books on philosophy and leadership from which we can glean advice. And of course, this treasury of self-help tomes extends back far into the past, and books written by men like Teddy Roosevelt, Frederick Douglass, and Dale Carnegie can be well worth dusting off and cracking open — especially when you’re looking to assemble a cabinet of invisible counselors. Reading books by your “mentors” — even if they’re long gone from this world — is a great way to learn and grow as a man.

What if I told you, though, that there was an even better way? Those men that you revere were quite likely readers themselves. There were books that they devoured and studied over and over that influenced who they were and how they came to see the world. Their own philosophy represents a distillation of all the great works they fed into their minds, so why not trace the stream of their thinking back to the source? Or, as David Leach, a now-retired business executive put it: “Don’t follow your mentors; follow your mentors’ mentors.” Taking in the wisdom of who your mentors admired will get you closer to being of the same mind than simply reading their own memoirs and journals.

With this article, we’re embarking on a series to help you do just that. Every few months or so, we’ll find a man in history who many admire and read about, find what and who he read, and post it here. Beyond being just a fascinating look inside a man’s life, you can use these lists to direct your own reading and expand your mind and character.

The Reading Habits of Theodore Roosevelt 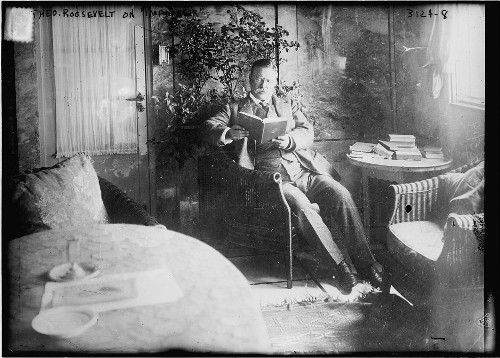 “Books are almost as individual as friends. There is no earthly use in laying down general laws about them. Some meet the needs of one person, and some of another; and each person should beware of the booklover’s besetting sin, of what Mr. Edgar Allan Poe calls ‘the mad pride of intellectuality,’ taking the shape of arrogant pity for the man who does not like the same kind of books.” ~TR

Who better to start with than our revered Theodore Roosevelt? We’ve covered his tenacity, his physical strength, his childhood, his integrity – heck, we even have a poster of one of his most famous quotes in the AoM store. He was an influential man to be sure, but who influenced Mr. Roosevelt? What did he read in his spare time? What did he pick up from his library over and over again? I recently stumbled across a letter he wrote to a friend who had asked for book recommendations. Not able to restrain himself, Roosevelt listed over 100 works – and those were only the ones he could remember reading from the previous two years!

“A book must be interesting to the particular reader at that particular time.” ~TR

TR was quite famously a rabid reader. He would read a book before breakfast, and another two or three in the evening. It’s estimated he read tens of thousands of books in his lifetime, many of them in other languages. (If you’re asking how this is possible, he was also famously a speed reader. Lucky for you, we’ve written about how to speed read like TR.)

Another key to the vast number of books Roosevelt was able to devour in his lifetime was his remarkable power of concentration. As one biographer wrote, “his occupation for the moment was to the exclusion of everything else; if he were reading, the house might fall about his head, he could not be diverted.” When riding a train on presidential business, he’d sit completely absorbed in his books, disengage to have brief conversations with the delegations that came through his car, and then immediately lose himself once more in the pages before him. Whenever he was reading, he gave off the impression to observers that he was in a completely another world, “as if alone by a campfire in some deep forest.”

“Now and then I am asked as to ‘what books a statesman should read,’ and my answer is, poetry and novels – including short stories under the head of novels. I don’t mean that he should read only novels and modern poetry. If he cannot also enjoy the Hebrew prophets and the Greek dramatists, he should be sorry. He ought to read interesting books on history and government, and books of science and philosophy; and really good books on these subjects are as enthralling as any fiction ever written.”

While Roosevelt was renowned for his ability to direct his full attention to a book, he was not at all opposed to the idea of skimming when necessary. He would jump around to try to get the meaty nuggets of text that would inspire him or force him to think critically about something. Regarding Dickens, he wrote, “The wise thing to do is simply to skip the bosh and twaddle and vulgarity and untruth, and get the benefit out of the rest.” When reading Greek history, he might take in a chapter or two before setting it back down for a few months. He didn’t live by any hard and fast rules of reading in which he had to finish everything he picked up. He did what worked for him, and ended up being one of the most well-read men in all of history.

Below you’ll find the list that TR sent to his friend in its entirety. Peruse it, use it for your own reading life, and enjoy it. You’ll find everything from Greek history and tragedy, to the dramas of Shakespeare, to modern popular novels, and treatises on the outdoors. He noted in his letter that he had read over half of these titles multiple times – an incredible feat in its own right.

While you can use this as your next reading list, I would not recommend being too fastidious about it. If you don’t enjoy a book on the list or don’t find it interesting, then don’t continue reading. Mr. Roosevelt was clear that each man enjoys different things, and those are the things he should pursue (but especially fiction and poetry!).

Note: They are in the order that Roosevelt listed them in his letter.