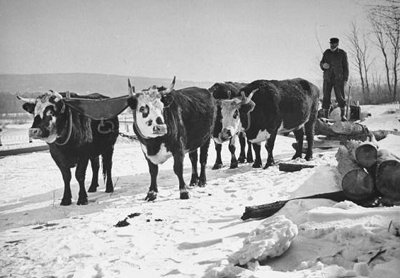 Embracing the opportunity and promise of self-improvement is a big part of the mission of this website. I’m a firm believer in constantly trying to better all aspects of your life and putting the goal of becoming a better man ever before you. Onwards and upwards, right? Well…yes, but…

I’d like to talk about that but today. Because if you believe that life should be a continual line of progress, you may stall out before you even get going.

This has been a hard lesson for me to learn. When I would get stuck in a rut, whether personal, professional, physical or spiritual, I would immediately feel like something had gone terribly wrong somehow. That the lack of progress was a problem that needed to be fixed. Either I was the problem-I was doing the wrong things or having the wrong mindset-or there were circumstances in my life that needed to be remedied. And I would embark on a combination of self-flagellation and frentic search for what was ailing me. I tried to eliminate my rut through sheer force of will. But the more I fought against the feeling of being stuck, the more stuck I seemed to become! It’s like being in quicksand.

But lately I’ve been rethinking my approach and trying to see these plateaus in my progress in a different way: not as a problem, but simply as a natural part of the different seasons of life.

Instead of kicking against the pricks like a mad man, I’m learning to accept that success doesn’t happen in a straight upward trajectory. Rather, a man’s success in life is often cyclical, like the seasons of the year. All of us will experience the springs of life where everything goes our way. We’re flourishing and blooming in all aspects of life. We start to think it will last forever, that it should last forever. But as assuredly as the sun rises and sets, fall will come and the winds of change will blow in the cold winter season, when everything seems dead and barren. 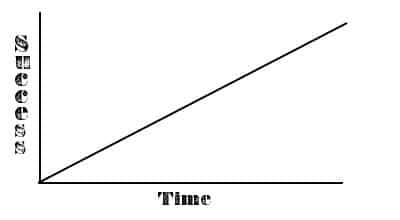 This is how we imagine our progress in life should go. But success in life never follows a straight, upwards trajectory.

Just as we don’t have much control over when the seasons of nature change, we often don’t have control of when we get into life’s ruts or when we start to flourish again. We can rant against the change in seasons-bolt the door and crawl under the covers or live in denial and trudge through the snow in the shorts and t-shirts of a warmer time, even though we’re chilled to the bone. Or we can accept the new season and adjust to it, taking advantage of what the season has to offer while preparing once more spring. 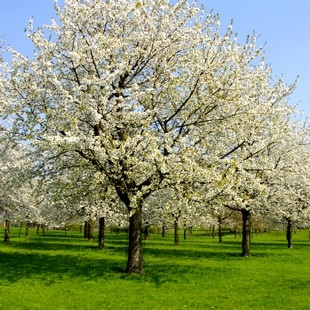 American Transcendentalist Ralph Waldo Emerson is one of my favorite thinkers. He’s had a big impact on how I see the world, and lately, I’ve been revisiting some of his writings. One thing I’ve noticed in his journals and letters is that Emerson enjoys talking a lot about the pear trees he’s growing. He gives frequent updates on how they’re doing and what sort of crop they’re yielding.

Throughout his career as a writer and philosopher, Emerson would frequently suffer severe writer’s block. No matter what he did, ideas just wouldn’t come to him. When your life’s work is writing, getting stuck like this is devastating. For a time, Emerson did what most people do when they get in these ruts. He’d fight like hell only to end up mentally and emotionally drained. But Emerson’s pear trees helped him change the way he saw this “problem.”

In a letter to an acquaintance, Emerson compared the mind to a pear tree that goes through a season of barrenness only to suddenly burst forth in fruitful growth. Emerson learned that to avoid the frustration of barren times, a man needs to “adopt the pace of nature” whose “secret is patience.” Just as the farmer must continue pruning and grafting his trees in the winter in order to reap the harvest in the spring, Emerson continued to work and cultivate his mind to prepare for the return of inspiration. After a mental winter, his mind would inevitably bloom once more. 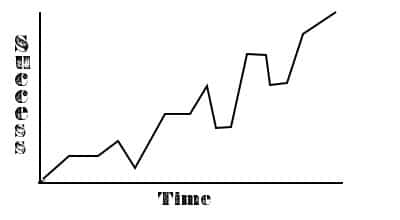 This is how our progress in life can realistically go. In the upwards direction over the long term, but with peaks and valleys along the way. Take note: If we work through the dips, we always rise higher than our previous peak. The valleys are where we are tested to see if we have what it takes to get to the next level.

Great Men and the Changing Seasons of Their Lives

As I’ve studied the lives of great men from history, I’ve noticed that their success rarely, if ever, followed a straight upward trajectory. It came in cycles or waves. They all had to walk through the long, cold winters where they faced setbacks and failures, only to rise triumphantly into the spring of their lives.

Take Abraham Lincoln. We often remember him as the president who saved the Union and as the Great Emancipator. But before Lincoln enjoyed the fruitful spring of his tenure as U.S. President, he endured a horribly long and barren winter filled with failure after failure, and setback after setback. Lincoln lost six elections, failed in several businesses, lost his first love to typhoid fever, and had a nervous breakdown.

But Lincoln had the wisdom and understanding to not incessantly kick against the pricks of life’s failures. He had the humility to admit that he was “the subject of the divine force–call it fate or God or the ‘Almighty Architect’ of existence,” and that he wasn’t the captain that was guiding life’s ship. However, Lincoln’s acceptance of his lot in life didn’t lead to docile complacency. While he didn’t feel he was the captain of the ship, he didn’t see himself as just an “idle passenger” either. Lincoln saw himself as a “sailor on deck with a job to do.” ((http://www.theatlantic.com/magazine/archive/2005/10/lincoln-apos-s-great-depression/4247/))He kept trudging along. He continued to prune, graft, and sow seeds so that when the spring of his life finally came, he’d be ready for the harvest.

Winston Churchill was another man who experienced the changing seasons of a man’s life. After enjoying a precipitous rise in power at precociously young age, Churchill went through years of political exile because of several blunders he made. But Churchill kept working and waiting for his spring to come again. And it did! His leadership during WWII inspired the British to stand up to and defeat Nazism.

But even this season of success was short lived. In 1945, the same year of the war’s end in Europe, Churchill’s fellow citizens voted him out of office. Many voters felt that while the British Bulldog was an exceptional leader during war, his skills and abilities wouldn’t suit the country during peace time. The defeat was personally devastating to Churchill, but he accepted that he had another winter to face in his life and got right to work sowing the seeds for his next spring. It took six years, but in 1951 Churchill was elected as prime minister for a third time. Spring had come once again.

The Seasons of Your Life

Now, I don’t want to people to get the wrong idea. I’m not advocating complacency or idleness here. Sometimes life’s dry spells happen naturally and are out of our control, but sometimes the problem is indeed you. If you’re lying around in your basement all day playing video games and wonder why you’re not meeting chicks and don’t have a job, your problem isn’t the seasons of life, it’s your slothfulness.

But sometimes you’re working hard and doing all the things you’re supposed and yet you’re just not seeing results. The temptation is then to freak out about the plateau, convince yourself that you’re on the wrong track, and throw in the towel. But if you stop working, you won’t be ready to capitalize on new opportunities when spring returns. Once we’re idle, it’s hard to get going again. Bodies at rest stay at rest, right? Instead, we’ll have to spend an exorbitant amount of time and energy getting ourselves in the working mindset again. By the time we’re primed and ready to go, our personal spring may have already come and gone. That’s why it’s so important we keep hustling during all the seasons of our lives.

Preparing for the Spring to Return

So if you’re journeying through a personal winter, what can you do to prepare for the return of spring? It’s going to be different for every man and every situation.

You can certainly try changing things up. Maybe what’s worked before doesn’t work now. If you hit a plateau in your fitness goals, try a new routine. If your small business has seen fewer leads, try tweaking your marketing. The winters in your life are a great time to try new approaches. The key is that you keep working and continue planting seeds so you’re ready for spring.

But maybe your tactics are sound and there isn’t much you can change. What do you do then? Just keep working so your mind and psyche are primed for when the stars of your life align once again.

For me, I’ll go through funks where writing for the blog just doesn’t come easy at all. My idea bank just dries up. What do I do during these times? For starters, I try to keep writing every day, even if it’s just a journal entry. I’ll read up on how to improve my writing style. I do a ton of reading of all sorts during these fallow times. It’s my way of fertilizing my mind with different ideas so when my spring finally comes and the Muses decide to visit again, I’ll be ready with new material to work with.

Too many men think that a dry spell means they’ve made the wrong choice, and it’s time to bail out. Their relationship plateaus, so they move on to a new woman. Their progress on a project stalls, so they chuck it. They experience doubt and turn from their faith. They walk away from what they’ve planted, unaware that if they had held on a little longer, the buds were just about to sprout through the surface.

Settle in your mind the fact that bust times are just as natural in life as boom times. Instead of seeing them as an aberration, instead letting them scare you, just get comfortable with them. When winter settles in on your life, keep your shoulder to wheel and keep pushing along. Your spring will return. It always does. And when it does, you’ll be ready.