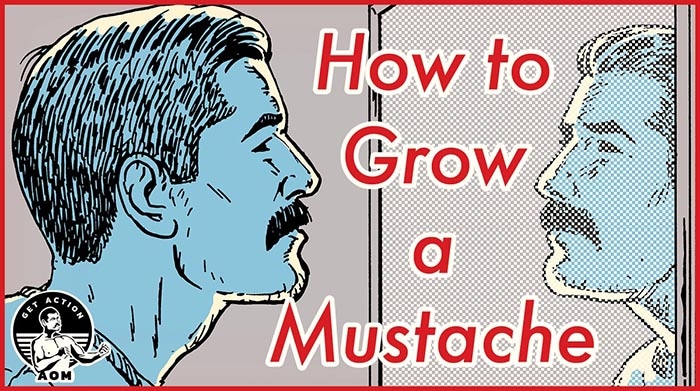 I’ve sported a mustache for almost a decade. I grew my first mustache back in 2009 for Movember. I thought it would just be a fun, temporary thing for a good cause. As soon as Movember was over, I was going to shave it off.

So the mustache has stayed perched above my lip ever since.

I’ve shaved it off two times during the past ten years for kicks and giggles. It freaked my kids out. My youngest actually cried when I came into the room clean shaven. Kate wasn’t pleased. The mustache was back a month later.

Over the years, I’ve had men ask me for tips on growing a mustache themselves. Really, there’s not much to it. You just don’t shave over your lip for a month. The men who ask me this question already know that. What they’re typically trying to get at when they ask about how to grow a mustache is how to do it in a way that doesn’t look creepy or upset their wives.

Those are trickier questions.

Below I offer some answers, as well as general advice on growing and sporting a killer stache.

Grow a beard for two or three weeks. A lot of guys don’t grow mustaches because they want to avoid looking creepy during those first few weeks when their nascent mustache is first emerging. I get it. Having a clean shaven face with a thin, patchy line of hair above your lip isn’t a good look. It makes you look like that one smelly dude in middle school who hit puberty earlier than everyone else or a creepy McCreepsalot.

To avoid this awkward early mustache phase, skip it all together by growing a beard for the first 2-4 weeks.

For some reason, people are a bit more charitable with your new facial hair if you look like a wino sprouting a full beard rather than a creeper sprouting a mustache alone. So just grow a nicely kept beard for a few weeks until the hair above your lip is full and thick enough to stand on its own. Then shave off all the hair around it.

No, there’s nothing you can do to grow your mustache faster or thicker. There are vitamins and supplements out there that claim to make your hair grow faster and thicker, but the evidence and reviews of them are very mixed. And they’re invariably expensive, and almost assuredly not worth it. How fast or thick your facial hair grows is almost wholly dependent on genetics. So just take a cheap multivitamin, eat a balanced diet, and be patient as you wait for your stache to grow in.

Check out our illustrated guide to mustache styles for some inspiration.

What if I grew a mustache and it doesn’t look good on me?

Then the mustache just isn’t in the cards for you. That’s okay. Plenty of people have had kickass lives without a mustache. You can too. You’ve got to know when to hold ‘em, and know when to fold ‘em. And know when to shave ‘em. Don’t try to force the stache.

Maintain your mustache. Once you’ve settled on a mustache style, it’s just a matter of maintaining it. Once a week I trim my mustache. If I’m feeling sassy, I’ll put some beard oil in it. I don’t think it does all that much. But it smells nice.

“I wish I could grow a mustache like that.”

“Man, the mustache is a good look for you.”

I’m not sure what’s going on there. My guess is the mustache is a bold facial hair statement, and dudes admire the chutzpah it takes to pull it off.

I don’t get many compliments from ladies, unless they’re in their 60s or 70s.

What if my wife won’t let me grow a mustache!?

So you want to grow a mustache, but your wife/girlfriend is opposed.

Well, you could just grow it anyway; it’s your face, after all.

But this is a relational area where it behooveth you to broker a compromise. After all, you may look at your mug in the mirror a few times a day, but she’s looking at it for hours on end. And she’s got to put her lips right under that furry caterpillar, and you want her to want to.

Here’s the thing: women assume they don’t like mustaches based on their abstract conceptions of mustaches in general, not an actual mustache, on you. She’s never seen a mustache on you, and when she does, it might change her mind.

So here’s my advice: wait til Movember or No Shave November, and say you’re growing out your beard/mustache for charity. No one can argue with such a noble, philanthropic aim. After the month is over, keep the stache and see what she says. As it’s been growing on you, it may have grown on her. She may find that the stache has increased your sexual attractiveness and tiger energy by 672%.

If not, well, the decision is back to being on you. You can make your stand and keep it. Or not. Just depends on how often you want to get Frenched, I guess.

Wear your mustache; don’t let your mustache wear you. Even though your mustache may become a conversation starter, don’t let it become a primary part of your identity. It’s facial hair, not a calling card, a personality trait, or a reason for a social media post. It’s part of your personal presentation and style, sure, but it should be no more of who you are than whether you rock a crew cut or mop top haircut.

There you go. How to grow a mustache. Grow a beard, shave everything but the mustache a few weeks later, maintain mustache, bask in compliments from random dudes.

The mustache life is indeed the good life.