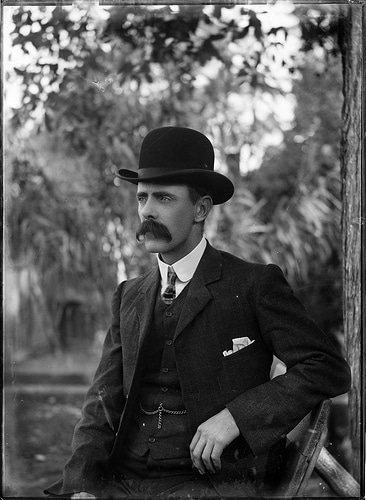 Editor’s note: This impassioned (and fun to read!) article on the virtues of mustache-manship comes from Abdul R. Chaballout. Enjoy.


For those of us who have forgotten life in the United States before the 1980’s, the sudden appearance of Brad Pitt and Yankees first baseman Jason Giambi, parading with freshly blossomed mustaches may seem random and unorthodox. Having spent the past year in the Middle East, where this particular expression of facial hair is very much a conventional display, I began to question whether we as Americans have forgotten an important element of human nature that many cultures globally have preserved. It was only after I embraced life with a mustache myself that I have come to transcend my initial prejudices on the matter.

I have found in this current age, men generally fall into two camps: those who tote and understand the mustache, and those who do not tote and do not understand the “hirsute appendage of the upper lip.” The latter community perceives the mustache to be an arcane ornament, a male accessory that is often displeasing to the common eye. This is a group that also believes in the clean-shaven status quo of modernity, subsequently casting the mustache into the dark abyss of the past. The former community, however, can naturally delineate the je ne sais quoi importance of the mustache, which has everything to do with manhood, and nothing to do with fashion. This is a group that fully apprehends the dying state of masculinity and seeks to rekindle the art of manliness through a reawakening of the mustache. At the core of this movement lays the belief that within every mustache lies ancient tradition, virtuous character, and resonant fellowship.

Every strand of hair found above a man’s lips serves as a tribute to the pantheon of mustache holders throughout history, an ode to the testosterone that has driven every strand of every male’s facial hair since the first man roamed Planet Earth. Historically speaking, the first record of man’s extravagant display of his mustache goes back to a painting of a Scythian horseman from 300 BC. Fast forward to the current age, where societies by and large have maintained their bond to the mustache, as evident in Egyptian society today, where a man’s honor is measured by the size of his mustache. Truth be told, an Egyptian clan elder was stripped of his honor in recent years when an unfortunate scuffle led to his kidnapping  and the subsequent humiliation of seeing his mustache shaved, packaged, and sent home.

It is only in recent times that the mustache has become a ubiquitous trademark of villains, pimps, and scalawags. One can easily find himself perplexed at how such a bona fide expression of man can so suddenly find itself disparaged. While it is difficult to pinpoint the exact source of this evolution, one must remember we live in a time where manhood itself has become a trivial matter. As such, it is up to the vigilant and the wise to bring the youth of today back to the straight path. 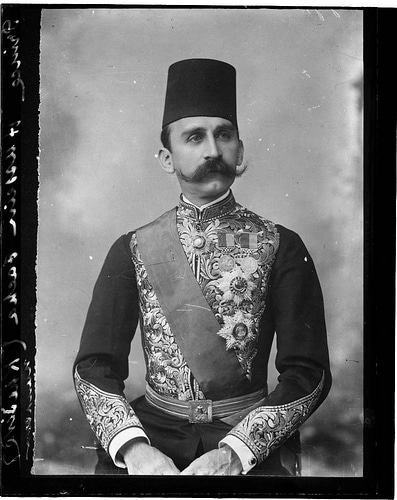 Prince Hussein Pacha of Egypt… and his mustache.

The outward display of any mustache ostensibly indicates the presence of attributes that have most effectively driven the survival of the male race: virility and masculinity. Biologically speaking, release of testosterone in the development of all males drives the development of secondary sex characteristics, physical features that eventually sustain the holy blessing of procreation. One can appropriately compare the mustache to the feathers of a male peacock. Those peacocks that can flaunt the most impressive feathers are most likely to produce robust offspring. Similarly, those men with the fullest and cleanest mustaches are most likely to share their lives with women of the highest caliber.

Upstanding character in males holds honor as its nucleus. Only with strong honor can other positive attributes such as integrity, loyalty, and sincerity surface to the exterior of any man. That said, many societies hinge the honor of their males on the mustaches on their face. In Syrian society today, men build trust by swearing by their mustache and even go as far as offering their mustache as ransom in the event their integrity is compromised. And old Arab proverb once professed “every mustache has its scissors,” an indication that behind every mustache is a respectable male deserving of the utmost respect.

Unlike women, who bond primarily through face to face discussions, males bond best through shared activities, namely through those performed side by side. Two men embarking on the road to friendship do so with a mutual appreciation of one another’s machismo. Such activities include logging, hunting, war, etc. At a more primordial stage however, the process begins with the most fundamental element of human bonding: similarity. When two men meet, bonding prospects are significantly enhanced when both tote a well groomed mustache. The reason for this goes back to the ancestral nature of this patch of hair, as it integrates both tradition and character, which provides an invariably solid foundation any two men can find relevant.

The proverbial mustache is not only a male prerogative, but a bastion of the male presence. Pushing for its elimination from the zeitgeist of any era carries no meaning but a denial of the source of manhood itself. Toting the mustache with the right intentions is a God-given right that even the English recognized when they declared: “a man without a mustache is like a cup of tea without sugar.”