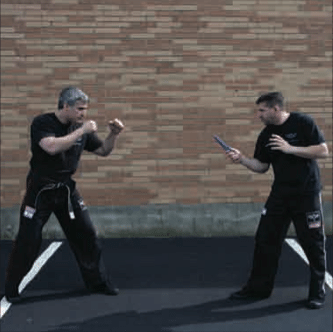 Welcome back to another installment of the Krav Maga Technique of the Month. If you haven’t already, please read our Primer on Krav Maga for the basics and background of this highly effective Israeli combat and self-defense system. Also, read our previous installments:

Today we’re tackling how to defend against an assailant attempting to stab you straight on.

This defense allows you to deflect an incoming left- or right-handed stab from either a left or right stance while simultaneously stepping off the line of attack, trapping your opponent’s arm, and delivering your own straight punch counterattacks to the attacker’s throat, chin, or nose. This same movement can be used to defend against a straight punch, eye gouge, or one or two-handed front choke. 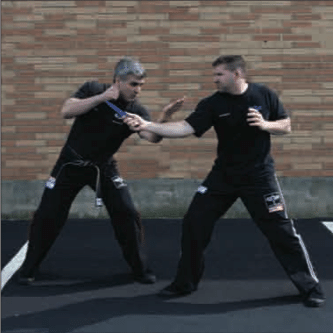 From your regular left stance, your left arm leads the body to parry the thrust as you sidestep. The arm should be bent at an approximately seventy-degree angle to deflect-redirect the assailant’s straight stab while making a subtle sidestep to the left. The parrying movement is no more than 4-6 inches because it leads the body’s defensive movement — as with most krav maga defensive tactics. This deflection-redirection is not an uncontrolled swipe or grab at the assailant’s incoming arm (a common mistake when first learning the technique). The defensive arm makes uses of the entire length of the forearm or from the pinky to the elbow to deflect any change in the height of the opponent’s stab attempt. The movement rotates the wrist outward so that your left thumb, kept attached to the hand with all the fingers pointing up, turns away from you as contact is made with the opponent’s arm to redirect the incoming thrust. Do not break contact with the edged-weapon arm; even if you cannot secure the arm, pin it to the attacker’s torso and continue your retzev counterattacks. Keep in mind the assailant may lunge, bringing you deep into his dead side* as he closes the distance while you simultaneously step off-line. 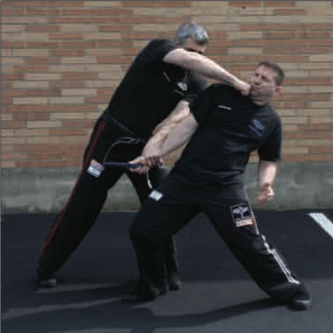 After the parry is made and without breaking contact with the assailant’s arm, which he will most likely retract, hook the assailant’s arm by cupping your left hand, wrapping your left thumb around his forearm for control, and pinning the arm against the assailant’s torso while delivering debilitating counter-punches to the throat or jaw. Note again, the assailant may generate such momentum that you deflect and move deep into his dead side. Nevertheless, do not break contact with the edged-weapon arm, even if you cannot secure the arm, and continue your retzev counterattacks. You are still safe provided you are inside the attack arc (usually a backstab or backslash) of the edged weapon. 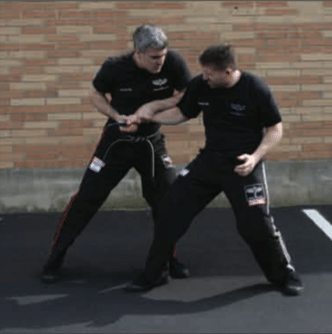 While pressing your counterattack, you can secure the edged-weapon arm with your right arm and take the assailant down using a fishhook into his eye, neck crank, or other combative.

Examples of combatives to employ from a similar bottle attack. Controlling the assailant’s head creates dominant control. You must control the weapon and move to the opponent’s dead side. Once you have achieved dead side position, reach around the assailant’s head to secure his chin and head tight against your torso. Use your body combined with a 180-degree (tsai-bake) step to take him down while maintaining strict control of the weapon.

The objective is to avoid being stabbed while placing you to the assailant’s dead side with simultaneous combatives into additional retzev counterattacks, including a powerful takedown, stomps to the head, and peeling the edged weapon from the assailant’s grip, or turning the assailant over to restrain him and removing the weapon: 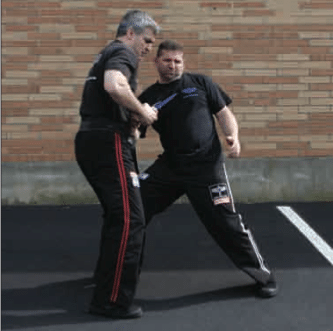 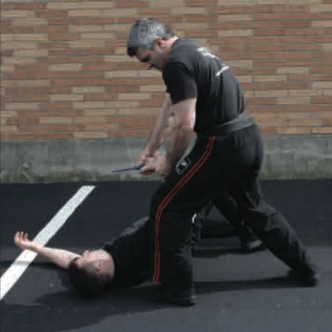 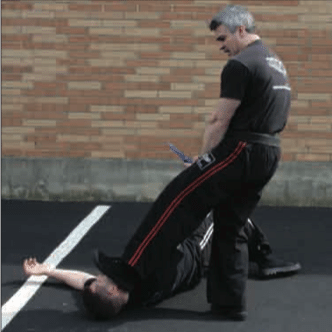 To remove the weapon from his grip, place your right hand on top of his right hand, knuckles to knuckles, and use the palm heel of your hand to punch his wrist toward him using your hips and upper body in concert. For added power, you may momentarily release your grip to cock your arm slightly to palm heel strike through his wrist. You can also deliver an elbow strike to his wrist, but use careful aim not to lacerate yourself on the edged weapon: 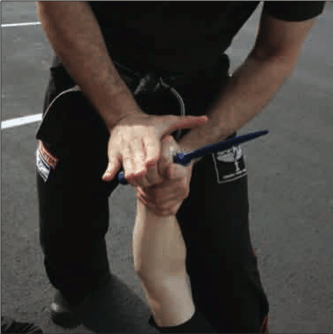 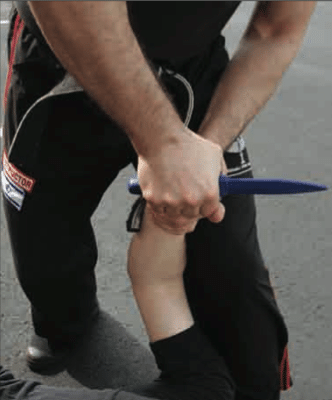 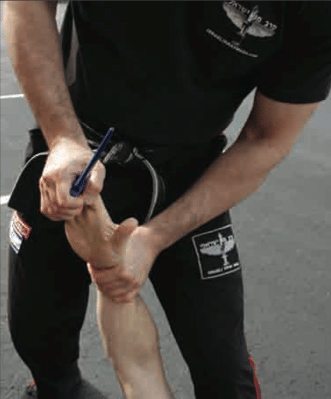 As you break the wrist’s posture, dig your fingers into his palm, wrapping around the weapon’s grip. Use your fingers to strip the weapon and pry it from his grip. 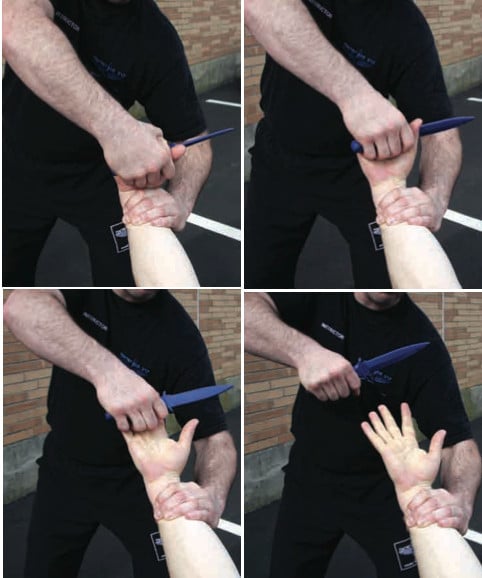 Another view of removing the knife. 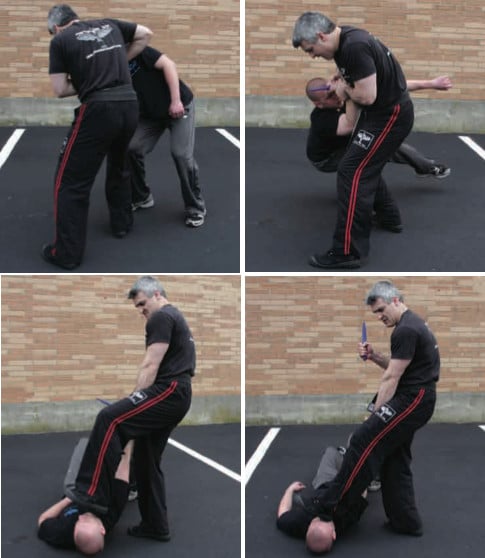 Overview of the sequence.

*The live side is the position in which the attacker/opponent has full view of all your limbs and can attack your front. The dead side would be closer to your back (or side) or any position in which the attacker/opponent cannot utilize the optimal strikes. The live side is the most dangerous side and most advantageous for your attacker. The dead side is safer and more advantageous for your counters.