Editor’s Note: We had such a great response to our Primer on Krav Maga article back in July, we thought many of you would be interested in learning more about this devastatingly effective martial art. To that end, each month we’ll publish a different krav maga technique explained by krav maga expert and author, David Kahn. Many of the techniques that David will share with us are featured in his latest book, Krav Maga Weapon Defenses.

The Israeli krav maga self-defense system has achieved global recognition for its efficiency, simplicity, and, when required, brutal efficiency. Krav maga’s world-renowned defense moves against weapons were developed for a modern army. Over the next few months, we’ll take a look at ways to defend against various attacks using impact weapons.

Impact weapon attacks can come in many forms — baton, hammer, crowbar, or any number of weapon-like objects. Impact weapons (along with edged weapons) are often referred to in krav maga parlance as “cold weapons.” Attacks can come from a myriad of directions, heights, and angles in single-swing attacks. The three fundamental principles of defense are either (1) to close the distance between you and the assailant while deflecting-redirecting the attack, (2) to disengage until you recognize the correct timing to then close the distance, or (3) to retreat straight away.

Close the distance. The end of the weapon generates the most force, as the assailant’s wrist is used as a fulcrum. Therefore, the most dangerous range of the attack is to be struck with the very end of the weapon. In other words, the object’s momentum decreases the closer you come to the assailant’s swinging wrist. That’s why it’s vital to close the distance between you and your attacker as quickly as possible. Optimally, the distance between the defender and the assailant can be closed before a weapon is deployed while debilitating the adversary with strong combatives, blocking access to the weapon, and achieving dominant control. If the weapon is successfully deployed and put into action, closing the distance will allow the defender to either deflect-redirect or block the weapon, the majority of the time in combination with body defenses, while delivering withering counterattacks. As with all krav maga defenses, the hand always leads the body to deflect-redirect in conjunction with simultaneous multiple counterattacks.

Time correctly. Another essential to a successful defense is precise timing; closing the distance and using the correct tactic at the correct time. Fight timing is best thought of as the fusion of instinct with simultaneous decision making to either pre-empt the attack, move off the line of attack/fire, deflect-redirect, control the weapon and strike, or retreat from harm’s way. In other words, fight timing is harnessing instinctive body movements while seizing or creating opportunities to defend both efficiently and intelligently. Defined yet another way, fight timing is your ability to capitalize on a window of opportunity offered by your opponent or to create your own opportunity to end the confrontation using whatever tactics come instinctively to you. In short, you’ll attack the attacker. Importantly, the tactics and techniques are designed to provide the defender with a pre-emption capability prior to a weapon being deployed. The goal is not to allow an assailant to get the drop on you. Your recognition of his intent and body language literally and figuratively will allow you to cut the legs out from under him.

Retreat straight away. As soon as you see that the threat has been neutralized, retreat as soon as possible to avoid future attacks.

Below, we take a look at how to defend against a common impact weapon attack: the overhand one-handed strike with a blunt object like a bat or crowbar.

One of the most typical attacks with a blunt object is an overhead swing. In this technique we assume the assailant is using his right hand and the defender is squared up or face-to-face. You will execute the defense with your sameside (left) arm and counterpunches with your right arm while controlling the weapon with your left.

Your goal is to close the distance to intercept and deflect-redirect the impact weapon harmlessly over your shoulder while delivering a simultaneous punch to the throat, jaw, or nose, trapping the weapon arm to remove it from the assailant’s grip while delivering more retzev (continuous motion) combatives. One way to practice the deflecting-stabbing movement of the defense is to simulate diving into a pool with your arms in a “V” motion to pierce the water while keeping your legs straight. Keep the fingers together and simply touch both of your hands together at the fingertips, resembling the inverted “V.” Do not touch your palms together, only your fingertips. Now, drop one arm into a straight punch position. Continue building this defense by aligning your deflecting-redirecting hand with a forward body lean, burying your chin into your shoulder. 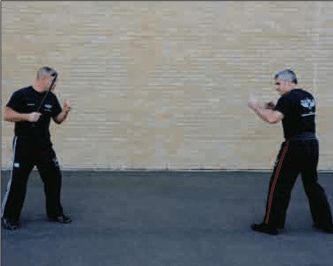 The forward combat lean achieves two purposes: it both defeats the attack and protects your head. Essentially, you are diving/bursting into your assailant with the sameside arm and leg to close the distance while deflecting-redirecting the strike and simultaneously counterstriking. Another way to think about aligning your deflecting-redirecting arm is to stand in a neutral stance and jettison your arm directly out to meet an imaginary incoming attack. Proper arm alignment requires a slight curve in your hand that will intercept the attack. Keep the fingers together and the thumb attached to the hand; do not allow the thumb to jut out because of the danger in breaking it. The deflecting-stabbing defense, when timed correctly and with proper interception alignment, will redirect the object harmlessly along your arm and over your head, glancing off your back. 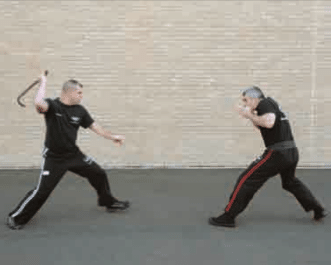 Time the defense and counter-attack punch together. The next (literal) step forward is with your left leg, closing the distance to the attacker. Remember to lead with your hands! Take a look at this video to better understand how to close the attacker. 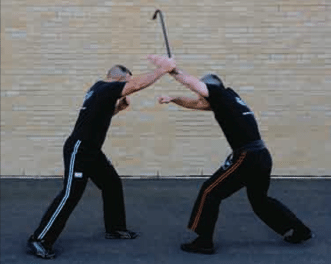 Redirect the overhand blow with one hand, while simultaneously counterpunching. 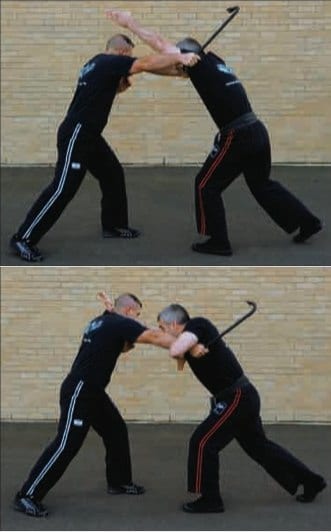 Continue your counterattack with a foreleg kick or multiple knee strikes to the groin depending on distance.

The most popular method to remove the impact weapon is to use a 180-degree step (tsai-bake) with your right foot to break or rip the impact weapon away from his hand without taking your eyes off the assailant.

Once you feel comfortable with the initial defense, add a simultaneous punch with your other arm, thrusting both arms out together. I recommend a palm down punch or keeping the palm of the hand parallel to the ground, targeting the nose, chin, or throat.

Next time we take a look defending a two-handed overhead attack with chair or stool. Until then, train hard and always remember retzev.