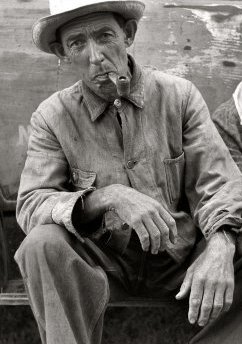 Pipe smoking is the oldest form of smoking tobacco, developed during an era in which men would make time to sit at the end of a hard day’s toil, to rock back and forth in their favorite chair and observe the rotation of life. They had an understanding that prolonged satisfaction is greater than the immediate and fleeting gratification we have a tendency to seek today. A pipe is a man’s companion, his smoky warmth on a crisp winter day and the friend with which he watches the passing of time. A pipe requires patience. It instills calmness, observation, and contemplation.

A pipe is best enjoyed from the stoop thrones of rocking chairs, beneath the shade of patio roofs and in the absence of unnecessary noise.

Why the Corn Cob Pipe?

In my mind, the corn cob pipe is a tangible symbol of a bygone era. Corn cob pipes are the tobacco-smoking instrument of the common man: those who surveyed their surroundings and did what they could with what little they had. These were men of thrift, of inherent frugality and of resourcefulness. They are the pipes of hard times, when men knew how to work with their hands, when they did what was required without complaint; when men were hard, lest they perish. Or as the saying goes: “back when dodgeball was played with sticks and stickball was played with knives.”


Legend has it that in 1869, a farmer in the Missouri countryside whittled a pipe out of a dried out corn cob. He smoked his tobacco and enjoyed the nice smooth smoking experience so much that he requested his wood-working friend to turn stems for the pipes on his lathe. Hence, the birth of the Missouri Meerschaum Company, the original and sole surviving manufacturer of mass produced corn cob pipes.

Though the beginning of the mass production of corn cob pipes commenced in the late 1800s, their emergence and individual construction likely began long before that, and certainly persisted for years to come. Within and beyond the Dust Bowl area, corn cob pipes were the instruments of farmers, hobos, migrant laborers, and vagabonds of all sorts.

Train hoppers in the Midwest and other corn-growing areas would find themselves in the presence of this abundant crop, often just off of the train tracks. With a communal sharing of simple tools and the luck of having a pinch of tobacco, having a soothing smoke on those enormously tiring days was a welcomed occasion.

Examining the evolution of pipe smoking in the 21st century is more like observing the slow extinction of a dwindling species.

According to “Bowled Over No Longer,” a 2005 Washington Post article by Peter Carlson, there exists approximately 1.6 million pipe smokers in America today. Since the 1970s, there has been a 91% drop in pipe tobacco purchases. With those statistics it becomes apparent that the current number of corn cob pipe smokers has likely declined even more dramatically.

Apparently, appreciating the afternoon with a pipe in hand has been exchanged for quick fixes of indulgence and gadgetry. People today tend to not simply sit and notice, say, the sun’s departure quietly occurring later and later each day. We may not consider why a particular bee chose to slurp the nectar from one flower and not another, or wonder why it hasn’t rained in so long.

In these days of instant coffee, fast-food chain-restaurants and 5-minute cigarette breaks, the corn cob pipe persists as a comfortable speed bump in the common rush of a frantic life.

With the immediacy of most things today, it can be easy to forget that we don’t always have to buy something we want, that we can allow ourselves a few solitary moments to create something with our own hands-and then enjoy the fruits of our labor.

In an attempt to grasp a few moments for yourself, I encourage you to try making a corn cob pipe, to take a contemplative breath and appreciate the fact that the world still spins.

How to Make Your Own Corn Cob Pipe 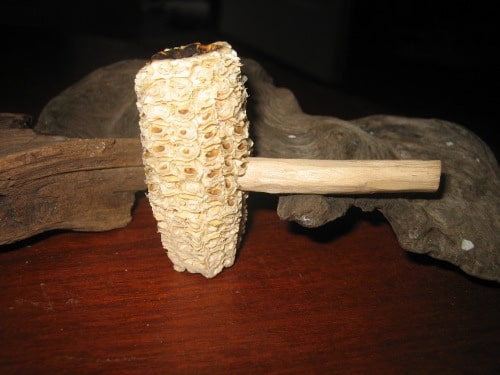 If meandering to your stoop throne on a sunny day and enjoying the smooth hit of tobacco from a corn cob pipe sounds good to you, then you’ll need to know how to make one. Granted, this will likely not be the quality of a Missouri Meerschaum (mine certainly isn’t), but it will be of your own creation.

It is said that the most important thing for a pipe smoker to do is to find a pipe that feels right. A pipe may not be sentient, but it will bring its own presence to the relationship between man and pipe. What better way to find this inanimate companion than to craft it with your own hands?

What You Will Need: 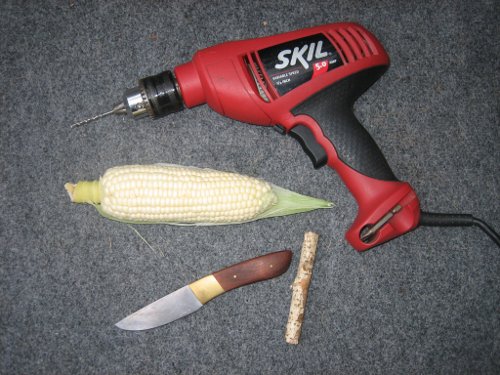 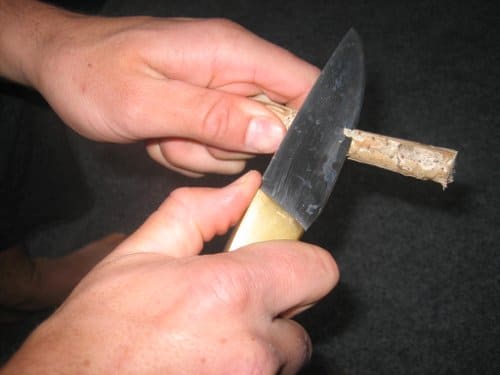 Make sure the ear of corn you use is as wide as possible and has plenty of pith (the portion of the cob at its center, where the bowl will later be shaped). Break the cob in half with your hands or cut it to the size you want with a pocket knife.

Here comes the waiting part. You’ll want that cob to dry out and harden as much as possible; professional corn cob pipe makers let their cobs dry for two years. Granted, we don’t generally have that much time to wait, so you can throw it in the oven or use a dehydrator to speed up the process. I let mine sit for about one week after baking it on 100 degrees for a few hours, and while I’m no expert, it seems to work fine.

Dig out the pith with your pocket knife to shape the bowl (another reason why “Every Man Should Carry a Pocket Knife”); if possible, make it about one inch deep. The width of your bowl should be as wide as the pith allows without making the walls of your pipe too thin. Having slender walls will make it hot in your hand when you light the tobacco, so keep them thick.

Beneath the bowl, drill a narrow path through the pith towards the bottom of the pipe…If you prefer to refrain from using power tools during this project (which is perfectly understandable and even encouraged), you can also heat up a metal hanger and bore through the pith’s center.

While you’re letting the bowl dry out, construct the stem of your pipe. There are a few options here; without a lathe it’s difficult to turn a piece of wood. If you have access to some narrow bamboo, then use that. It’s easy to hollow out with a metal hanger heated up red hot or with a drill, and it will fit nicely into the hole that will be cut near the base of your cob.

I don’t have a lathe nor access to bamboo, so I went out and found a downed Bay Tree branch, cut it, drilled a hole through its center and then whittled it with my knife until it fit the dimensions I wanted.

Use a pocket knife to angle one side of the stem down to a point. This side will be pushed into the cob. 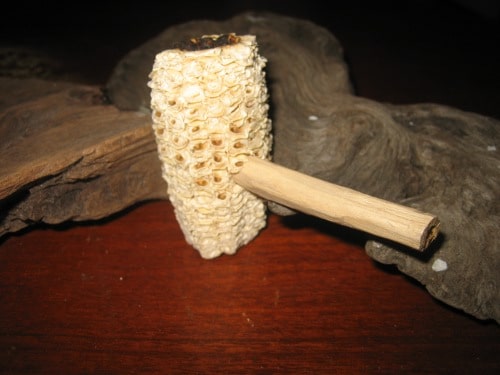 And now I’ll sit upon my stoop throne, observe the pollen sacs collecting on the legs of bees and appreciate the billowing drifts of smoke escaping my lips.