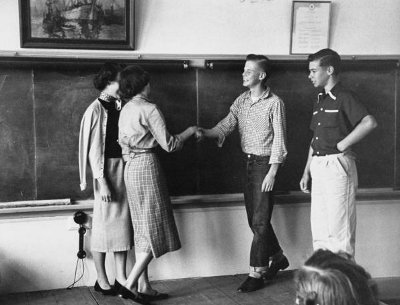 Have you ever been at a party with a guy who runs into somebody he knows and starts yammering away while you stand there awkwardly, holding your drink? Man, I hate when that happens. You’re left in social limbo. I usually have to just take things into my own hands and introduce myself, which is fine, but the exchange would have been much smoother had my friend introduced me to his buddies.

Being introduced invites you into the conversation and makes you feel like part of the group, which is why making an introduction shows your respect for your guest. Neglecting to make an introduction leaves a person feeling ignored and, well, awkward. Making introductions is particularly important in business settings as they establish a rapport of respect, get relationships off on the right foot, and give you an aura of being confident, prepared, and in control.

With our more casual culture, the art of the gentlemanly introduction has disappeared, but we’re here to help bring it back.

Making introductions used to be a much more formal affair, with bowing, scraping, and a lot of rules, but nowadays just remembering to make them sets you apart from the cads out there. So there’s no need to adhere to ironclad laws or be all flowery about it. Keeping it simple and respectful goes a long way, and doing so requires following just one basic guideline:

Situation: Introducing a business associate of any rank and a client

Situation: Introducing a man and a woman

(Note: In social settings, a man is always introduced to a woman, regardless of the individuals’ ages.)

Situation: Introducing a younger person and an older person (of the same sex)

Situation: Introducing a person and a relative

Situation: Introducing one or more persons and a group of people

What to Do When Being Introduced

Remember that first impressions are always the time to shine, so when being introduced to someone, look them in the eye, offer a good handshake (when meeting a woman, wait to see if she extends her hand first), and say something like:

Then, immediately follow-up with a conversation starter. “Rodger told me you’ve been training for a marathon next week. How’s that going?”

Listen to our podcast with John Corcoran for more on networking: