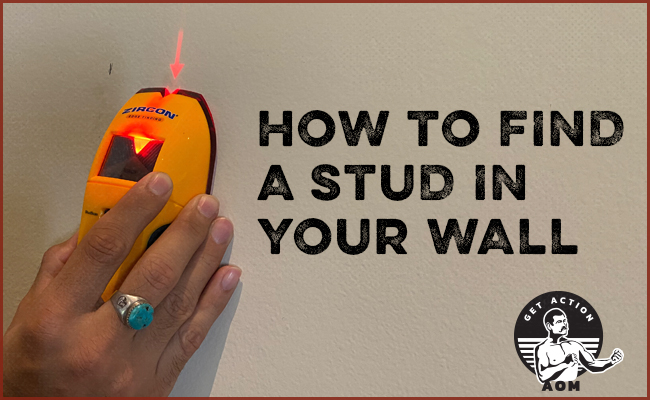 Hanging up a flat-screen television?

Putting up wall-mounted racks so you can organize your garage?

In each of these scenarios, you’ll need to know where the studs are in your wall so that you can mount this kind of stuff securely to it.

Here’s a quick guide to how to find studs in a wall quickly and painlessly. 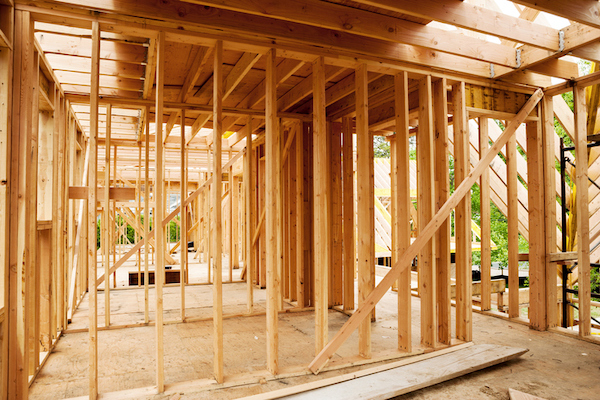 Studs are vertical wood 2x4s that make up the frame of most homes in the United States. Besides being used to provide structural support for your home, drywall is mounted to the studs to give your house its solid walls.

After drywall is affixed to the framing of your home, you can, of course, no longer see a wall’s studs with the naked eye. But there are devices which can help you “look” into the wall to find them.

There are two different kinds of these stud finders which each help you locate studs in a different way:

The more rudimentary type of stud finder uses a magnet. 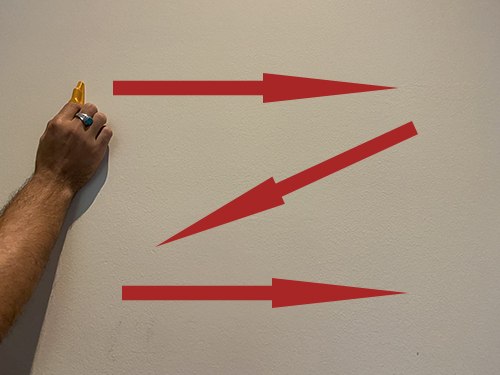 Any high-powered magnet can work as a magnetic stud finder. But there are ones made for the purpose like the StudBuddy, which you can pick up for $10 at most home improvement stores. Just run it back and forth across your wall in a zig-zag pattern. When the StudBuddy sticks to the wall, you’ve found your stud. You can leave the StudBuddy on the wall to act as your stud marker. No need to mark up your wall with pencil. 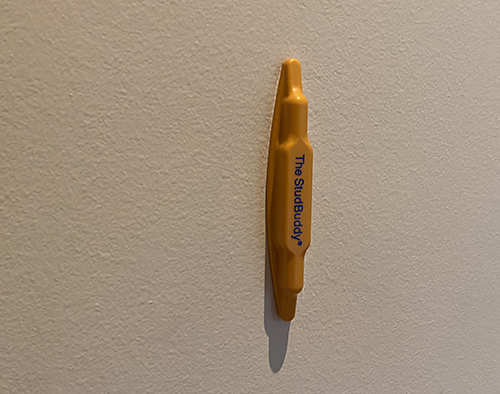 The upside of a magnetic stud finder is that it’s cheap, easy to use, and accurate.

Its downside is that you can spend a long time running it up and down and across the wall to find a metal fastener so that you can find the stud. This is the big reason why most people have upgraded to . . .

Electronic stud finders use capacitance to help you locate a stud behind the drywall. If you’re interested in the details of how capacitance works, read this article. The short and dirty explanation is that an electronic stud finder can sense when there’s a density change behind your drywall. When it senses more density, thar be your stud, matey, and the stud finder will start lighting up to tell you so.

Below, I show you how to use an electronic stud finder. In the demo, I’m using a Zircon stud finder that locates the edges of studs. Zircon has stud finders that can pinpoint where the center of the stud is, but they’re more expensive. 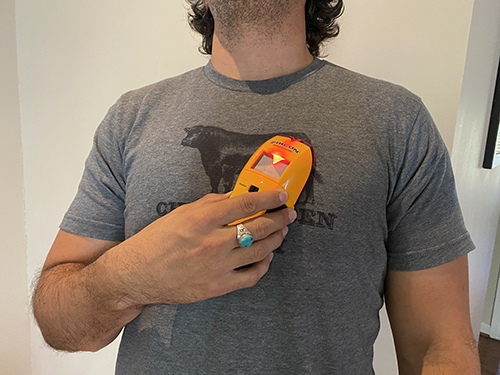 1. Run the stud finder over your chest. Look at your wife and say, “Looks like there’s a stud right here.” After appreciating your well-executed dad joke, get down to business. 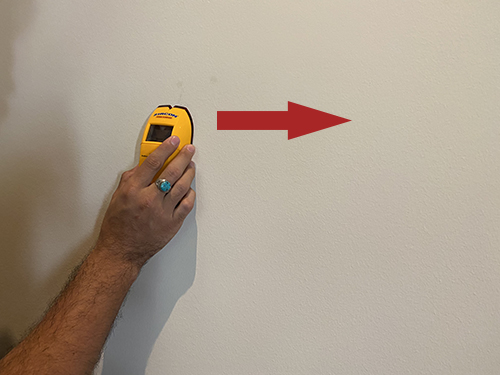 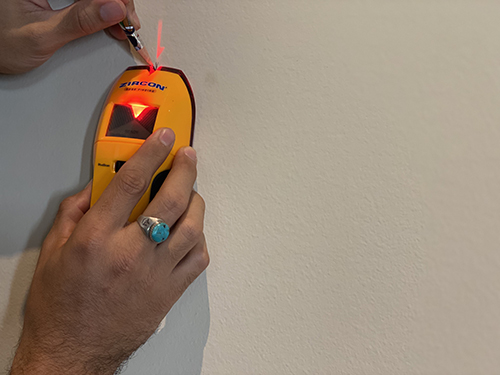 3. When your stud finder lights up, make a faint mark with a pencil. This is the outside edge of your stud. 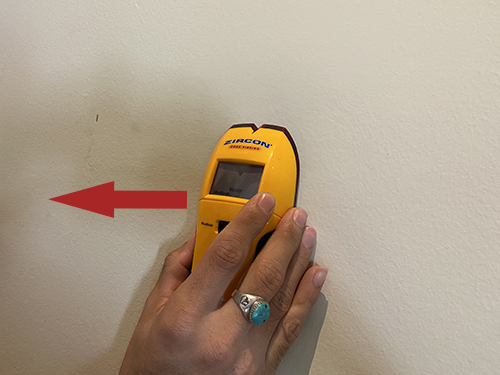 The middle of those two marks is the center of your stud. You can drive a nail or screw into your wall at that point, and it will be secure.

Once you know where the middle of one stud is, you can easily find the center of the studs that are to the left or right of it.

Most modern electronic stud finders are pretty reliable, but I’ve had issues with some. I’ve had instances where the electronic stud finder will give multiple readings of where a stud is located and all those readings were different from each other by a half inch, leaving me scratching my head wondering where the stud actually is. On the glitchy ones I’ve had problems with, I usually end up hammering a very small nail into the wall to verify that the stud finder did indeed find the stud.

What if you don’t have a stud finder on hand? How can you find a stud behind drywall?

Flashlight method. Shine a flashlight at an angle against the wall. You may (the operative word here is may) be able to see a column of slight bumps. Those are the nails used to fasten the drywall to the stud, and that column of bumps indicates where the center of the stud is.

Again, this may or may not work depending on how deep the nails were driven into the drywall and the amount of paint or plaster you’ve got over your wall. 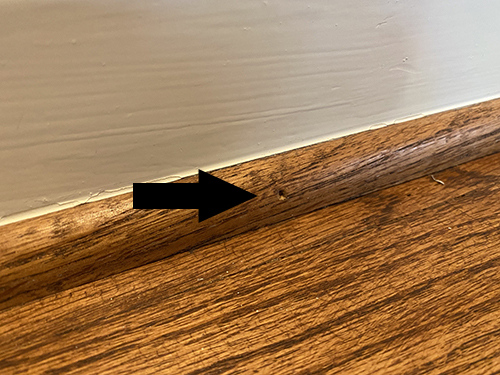 Check the baseboards for nail holes. Baseboards are usually (operative word usually) nailed to a stud. You’ll have to look really closely as the nails used to nail baseboards are really small. If you see a nail hole, there’s a good chance there’s a stud at that location. But maybe not. In my home, the nail holes in my floorboards weren’t near the studs. 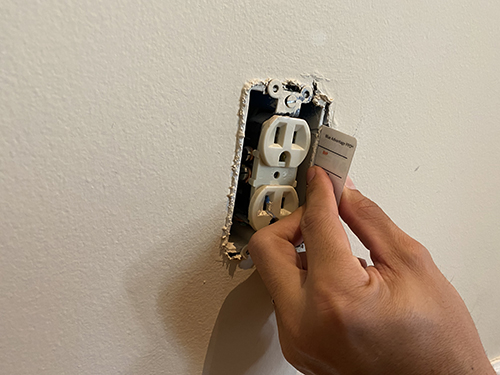 Check the outlets and light switches. Outlets and electrical switches are typically mounted to the side of a stud. To figure out which side of the stud the outlet or switch is mounted to, remove the cover plate and then slide a business card along the outside of the outlet box to feel for which side the stud is on. If you hit some resistance, you’ve found the stud.