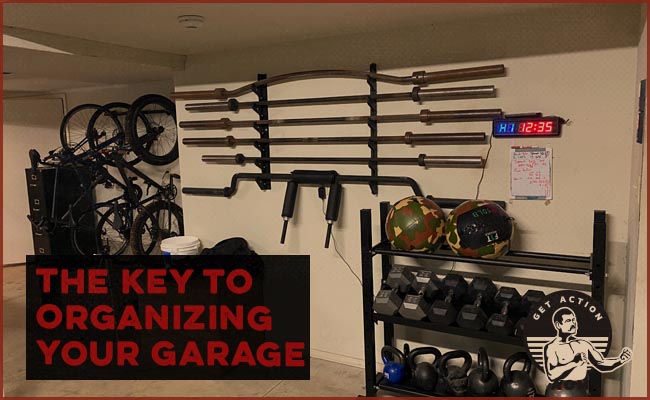 Garages can be unruly places. If you’re like me, you kinda treat it like the junk drawer of your entire house. Stuff slowly makes its way there, and then stays there. To get to something you want, you have to claw your way through a pile of other stuff.

I had made an effort at organizing my garage five years ago, which had certainly helped tame the chaos. But over time, things started to devolve. Not only were my general household tools and things getting harder to find and access, but the area of the garage dedicated to our home gym began to feel more cluttered and disordered. I had acquired more pieces of equipment and failed to incorporate them and set up the area in a way that felt clean and inviting.

The central issue wasn’t having too much stuff; I’m not a hoarder. Though I did need to get rid of some things, most of the stuff I kept in the garage was stuff I used and wanted to keep. What I really needed was a better way to organize it.

The Biggest Key to Organizing Your Garage: Get Your Stuff Off the Floor

I follow Coop over at Garage Gym Reviews, and one thing he hits on over and over again when it comes to organizing your garage gym is: “Get your crap off the floor.”

This is an admonition that applies as readily to garage gyms as to any kind of garage and every area of a garage.

The best way to get things off the floor, is to put them on your walls. Walls are underutilized areas for storage. When you hang things up on the wall, you free up floor space in your garage and make the area feel less cluttered. It also makes getting to stuff easier. Instead of reaching over things to get what you need, you walk up to the wall where the item has been hung and take it off.

I recently used Coop’s advice to rework not just my garage gym but my garage as a whole, and it’s been a game-changer. The place looks great, I’ve opened up floor space, and things are easier to access. Getting your stuff off the floor really is the biggest key in organizing your garage.

Below I’ll show you before and after pics of some areas of the garage I organized using the get-your-stuff-off-the-floor principle and offer tips on how you can do likewise.

Racks provided me the most significant ROI in freeing up floor space. There are racks for all sorts of things. 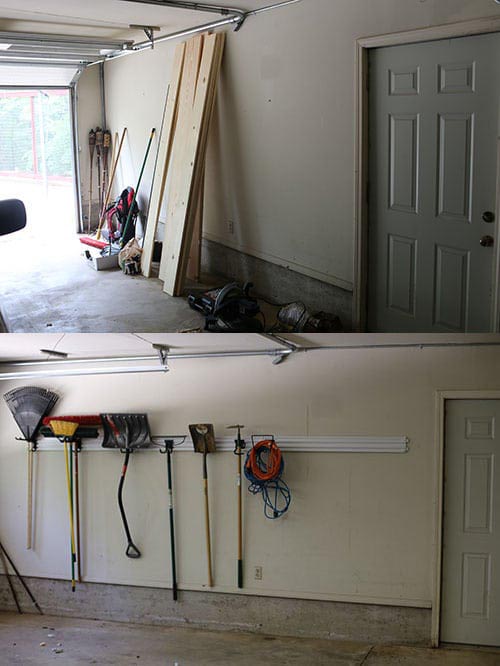 Getting a rack on which to hang things like shovels, rakes, brooms, and hoes is something I did during my previous reorganizing effort several years back. This time around I extended the idea to other clutter-creating items, like our bikes. 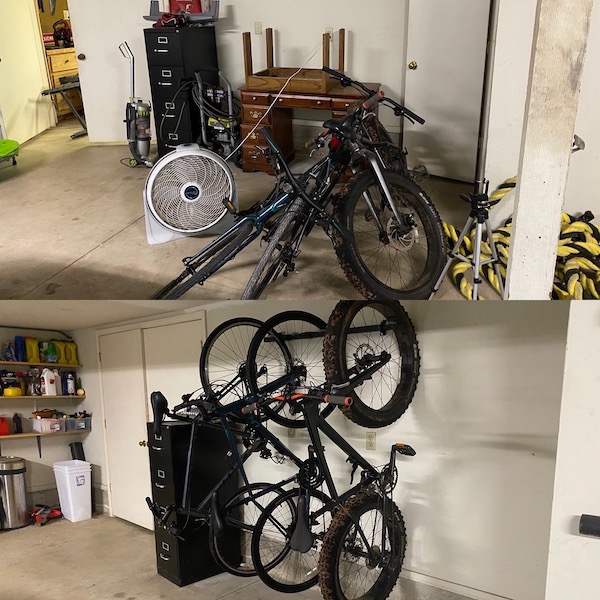 In addition to getting stuff off the floor, getting rid of some things we weren’t using helped too. For example, we had that old desk and end table sitting in our garage for years, thinking we’d use them someday. But we eventually realized we likely never would and got rid of them. Regularly prune your possessions.

I bought this bike rack on Amazon. I don’t know why I didn’t purchase it earlier. With my bikes hanging from the wall, I’ve freed up a lot of floor space, but more importantly, the bikes are just easier to get to now. Before, they were pretty much stacked on top of each other, so if I wanted my bike at the end of the stack, I’d have to move the other bikes to get to it. Such a pain in the butt. Now I go to the bike I want and take it off the wall. Easy peasy. 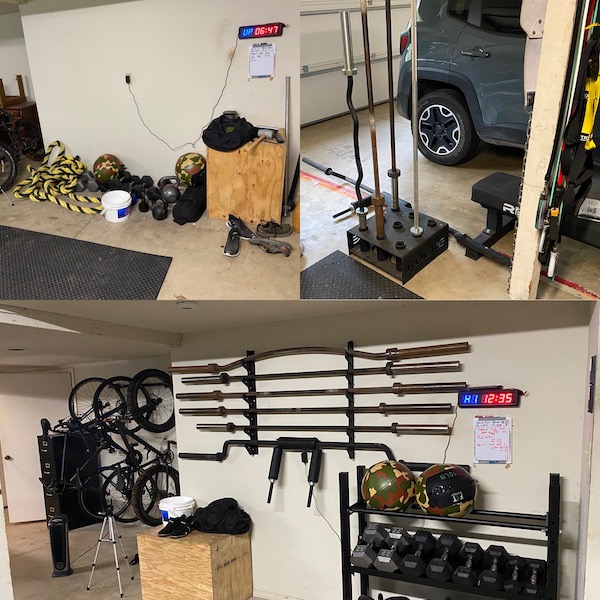 While getting something onto the wall is the ideal way to get something off the floor, it’s hard to hang up dumbbells and kettlebells. But I did still give them a lift and reduce their footprint by getting this dumbbell/kettlebell rack from Titan Sports. 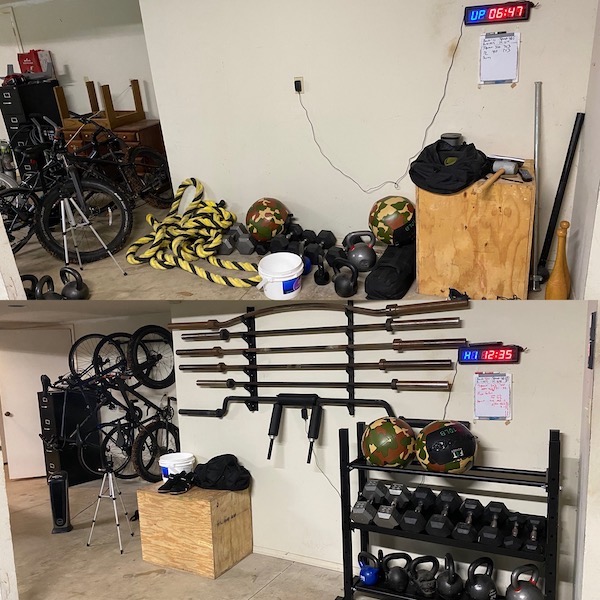 A wider look at the before and after.

The third rack I installed was for my barbells. I’ve got a bunch of barbells now, and they were taking up a lot of space. I stored a few of them in a Rogue 9 Bar Holder, but this vertical holder had some drawbacks.

First, I couldn’t store all my barbells in it, particularly my specialty barbells like my Duffalo bar, safety squat bar, and deadlift bar. They’re just too long and my ceilings too short for me to store vertically. So those bars were lying on the floor, taking up floor space. Lame.

Second, while the vertical bar holder doesn’t take up too much room, it still squatted on precious floor space in my garage gym. The tall structure created a physical and optical obstacle that made it hard to navigate the area and created a cluttered feeling.

So I bought the V2 Gun Rack from Rogue. This storage rack holds up to six barbells — on your wall. I’ve got pretty much all my barbells off the floor now, even the big specialty barbells. I’ve freed up a bunch of floor space, the garage feels tidier, and it just looks super rad having a bunch of barbells hanging on my wall. 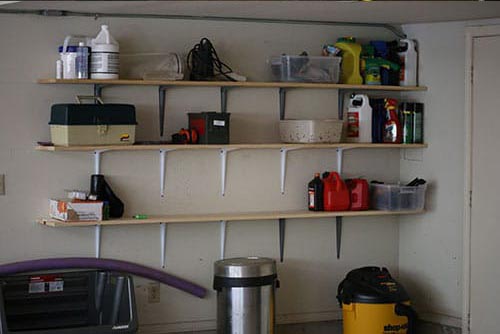 These shelves were another thing I put in during my previous round of organizing. They’re easy and cheap to install. Just get some brackets and 1×12 boards. Bam. They allowed me to get lots of little doodads off the floor. 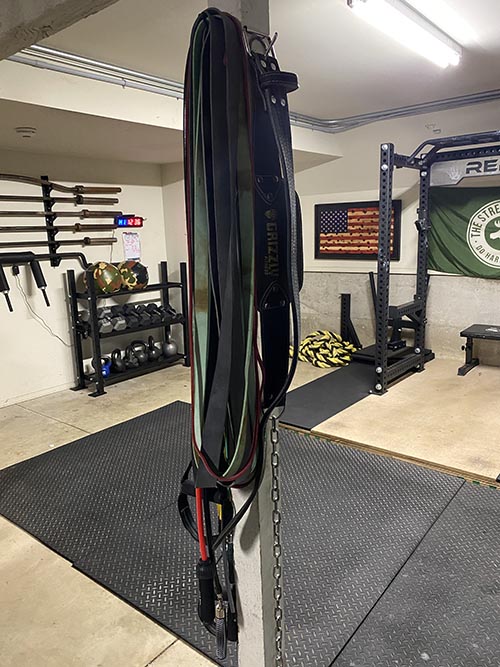 I have hooks on three sides of this pillar, on which hang very hook-friendly gym equipment: jump ropes, weightlifting belts, resistance bands, and TRX straps. I still need to get a wall-mounted storage hook around which to wrap our battle rope.

Hooks are cheap and should be used without abandon. I use them to hang up gym equipment like resistance bands and jump ropes in the area where I work out, and to hang up things like extension cords in the garage part of the garage.

If you’ve got the ceiling height, you can use hooks to hang your bikes from the ceiling. I love me a good hook. So versatile.

This is just the beginning of my quest to get my crap off the floor. Every time I’m down in my garage working out or doing some other chore, I’m always looking around and asking, “How can I get that piece of crap off the floor?” One day, I will reach crap-off-the-garage-floor nirvana.

If you’re having trouble getting started with organizing your garage, start off by asking yourself, “How can I get more stuff off the floor and onto the walls?” It’s not a panacea for organizing, but it’s the key that will take your the furthest. 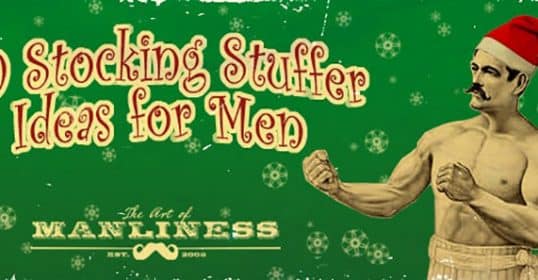