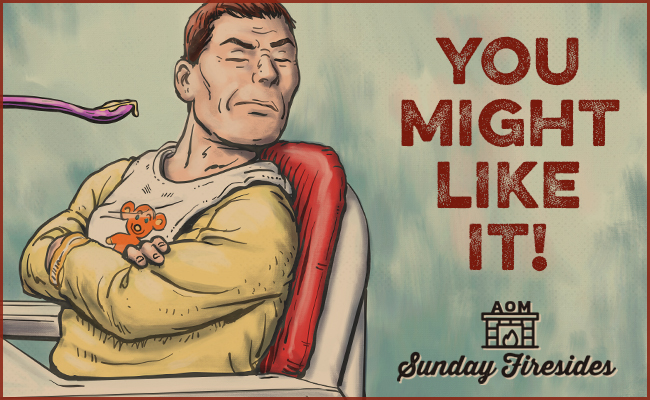 When the Japanese overran the Philippines during WWII, an American exporter found himself confined to an internment camp in Manila. To supplement their inadequate rations, many fellow prisoners took to eating insects, wild plants, and stray animals. But though the businessman lost significant weight, for months he couldn’t bring himself to try this seemingly disgusting foraged fare.

Yet when he finally gave in, he found it was . . . not that bad, actually: “In a few days, an old tomcat tasted better than spring chicken to me. I would undoubtedly be dead now if I had not, in desperation, made myself eat the first one.”

In our own less dire situations, we often let our preconceptions keep us from trying things that, if not life-saving, might be genuinely life-enhancing.

Whether it’s brussel sprouts, certain genres of music, particular types of travel, running, therapy, church-going, or parenthood, people can feel sure, sure, something just isn’t for them.

While one of the great privileges of adulthood is getting to lean into what you like, and eschew what you don’t, too often we’re guilty of prematurely slotting things into the latter category.

Sometimes we’ve never even tried the thing we’ve already formed an opinion about. Or we did try it, once, long ago, but not under the right conditions. Maybe we didn’t stick with it long enough (things grow on you with time). Or we lacked a mentor who could have shown us some appreciation-deepening nuance. Or we just weren’t ready.

Sometimes too, we adopt a professed aversion as a way to evince a desired persona . . . and then continue to hold onto it, long after we’ve outgrown that old identity.

Don’t wait for desperation to drive you to try something you might (hard as it may be to admit) be hungering for. Give stuff a(nother) chance. You might like it!