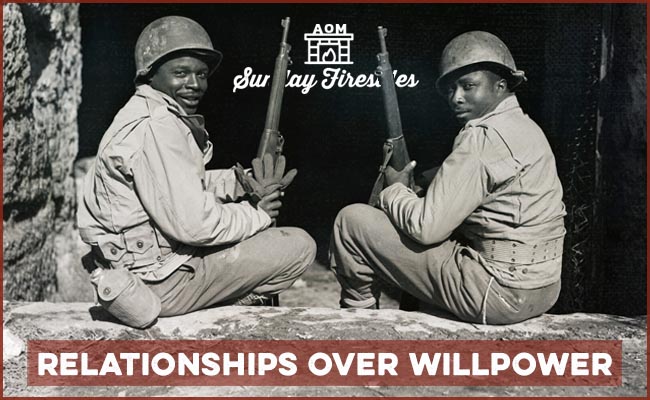 It’s famously been said that every individual is the average of the five people he interacts with most.

Life experience certainly bears out the validity of this truism.

A teenager falls into a friend group that practically undoes the influence of a previous decade and a half of parenting. A soldier goes into a deployment with one set of habits, and comes home with another. A man was never much for exercise, until he started dating a woman who is.

The people we’re surrounded by limit or expand our sense of what is possible; shift our perception of what is normal and acceptable; raise or lower our sights. The vast majority of this shaping effect comes not through direct means — overt cajoling as to what we should or shouldn’t do — but through the imperceptible-but-profound power of example, and the kind of energy others radiate into our lives.

When it comes to personal change, we can either work with or against this energy.

Doing the latter makes the task doubly difficult; you must not only face the resistance inherent to altering behavior, but also push against the countervailing force attendant to carving out a path foreign to your peer group.

In contrast, when you’re embedded amongst people who share your values, who are also after what you’re after, the wind is ever at your back. You change steadily, naturally — and often effortlessly.

The world of self-help is relentlessly focused on discipline, but the amount of discipline life requires is directly proportional to the quality of one’s family and friends. A spouse who ever encourages your excellence, a friend who consistently elevates your vision, a community which routinely realigns your compass, is worth more than all the resolution-making and teeth-gritting you can muster. When it comes to becoming who you want to be, relationships > willpower.