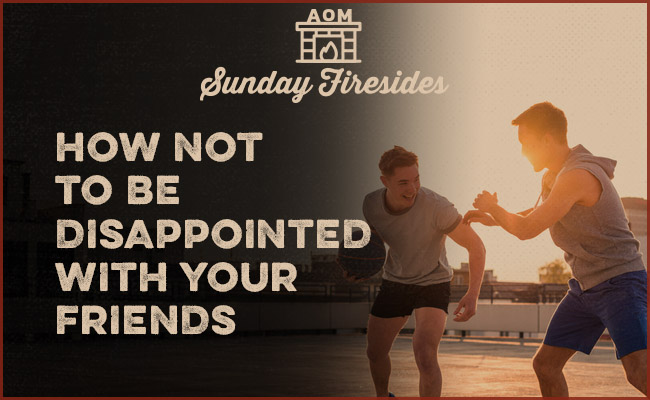 In their search for good friends, one often hears people say, “I like so-and-so all right, but…”

“I like lifting weights with him, but we can’t really talk about deep stuff.” “He’s really fun to hit the town with, but terribly flaky — he never answers my texts and sometimes doesn’t even show up.” “I’ve known him so long that we’re completely comfortable together, but we honestly don’t have much in common.”

Those who lament these “could-be-a-good-friend-but’s,” are disappointed they cannot find a friend who possesses all the qualities they’d like in a buddy.

This isn’t a bad desire; every once in a blue moon, you do meet someone with whom you share a cosmically strong connection; they become a best friend (or spouse).

With most friends, however, you won’t be so perfectly compatible. But that doesn’t mean you should write them off. You just need a change in perspective.

Rather than looking at your relationships through an all-or-nothing lens, it’s useful to view them in the light of what writer Gelett Burgess called “Vocational Friendship”: Rather than focusing on the qualities someone lacks, you appreciate them for the “specialty” in which they excel.

You enjoy your lifting buddy for lifting, without needing to talk Plato between sets. You don’t invite your flaky friend to a show, but you do call him up when you’re having a party. You appreciate your longstanding, if boring pal, for those times when it’s just nice to have some low-key company.

People don’t change much, and don’t exist to serve your needs. So, Burgess advised, rather than trying in frustration to make each friend a kind of Swiss army knife that works in every area of your life, approach people as “simpler tools,” enjoyed for the qualities you like most and the thing they do best.