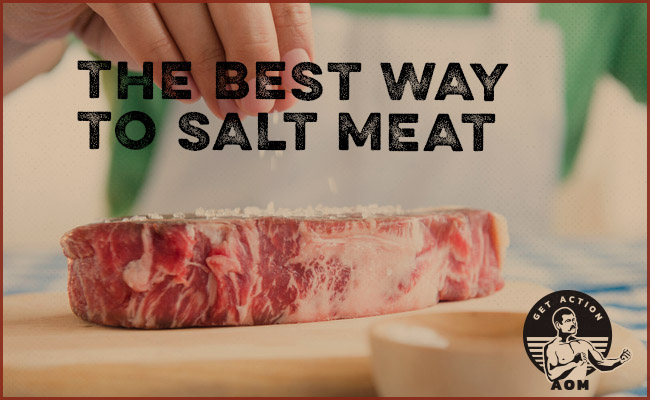 If you’re like most people, including myself up until recently, when it comes time to grill some meat, you sprinkle on the seasoning and salt right before you throw it on the fire. And it turns out well. No harm, no foul, and some tasty meat.

But lately I’ve adopted a tip that has totally changed my grilling game — and in fact how I prepare meat for any sort of cooking — for the better.

Here goes: Apply salt well before cooking, up to a full day in fact, and you’ll end up with the juiciest, most balanced cut of meat you’ve ever tasted.

This method is called “dry brining,” and it has a number of fans. AoM’s resident chef, Matt Moore, told me he “absolutely believes in the dry brine.”

Another proponent is Samin Nosrat, author of Salt, Fat, Acid, Heat (and host of the superb Netflix series of the same name), which is how I was introduced to the idea.

But dry brining is actually somewhat of a controversial practice. Those against it say it dries out the meat too much, extracting the moisture and therefore making it tougher. Salt, after all, is how meat used to be preserved sans refrigeration, and it’s still a big component of making jerky today.

But the effect of salt on meat varies with time. Loading meat with heavier doses of salt and allowing it to sit for long periods will cure the meat and indeed draw out its moisture.

But as Nosrat writes, when meat is brined with less salt, for less time, you actually get the opposite effect: “salt will dissolve protein strands into a gel, allowing them to absorb and retain water better as they cook.”

Nosrat gets more into this chemical process in her book, and while a little science-y, it’s worth understanding:

Think of a protein strand as a loose coil with water molecules bound to its outside surface. When an unseasoned protein is heated, it denatures: the coil unravels, releasing water molecules out of the protein matrix, leaving the meat dry and tough if overcooked. By disrupting the protein structure, salt prevents the coil from densely coagulating, or clumping, when heated, so more of the water molecules remain bound. The piece of meat remains moister, and you have a greater margin of error for overcooking. [emphasis mine]

The takeaway here is that pre-salting not only keeps meat juicer, it makes it harder for you to overcook it! That alone makes it a winner, especially when working with chicken and pork.

One final benefit: Dry brining gives the meat a better distribution of flavor. When you season just the top of a piece of meat immediately before cooking, you often end up with an outer layer that has good flavor, but then an inner layer that seems bland by comparison. Salting ahead of time, however, ensures the entire cut gets evenly flavored. Over time, the grains of salt dissolve and actually penetrate through into the meat; because of the principle of diffusion — a slow process — the salt will seek chemical balance within the flesh, which creates an even distribution.

Salting your meat ahead of time is just too easy to not do. I get that sometimes you’re stopping at the store after work for some meat and immediately plopping it onto the grill when you get home. That’s just fine. But when you have the meat ahead of time, always salt and let sit.

How to Dry Brine Your Meat

You can dry brine just about any kind of meat: poultry (including whole), pork (including larger cuts like the shoulder; don’t do ham, though, as it’s already well salted), beef, and even seafood (should only be salted for about 15 minutes though). If using ground meats — say for burgers or meatballs — only apply after preparing (salt the exterior of the burgers/meatballs rather than the entirety of the meat) and only for a couple hours; ground flesh just responds differently to salting since it has more surface area.

As mentioned above, you can use this method when preparing meat for any sort of cooking, be it steaks on the grill, pork butt for slow-cooking, chicken breast slices for pan-fried fajitas, whole birds for oven roasting, etc. You wouldn’t, however, combine a dry brine with a marinade. Most marinades are vinegar-based and do different things to the meat than what you’re intending to do with the salt. As for other dry seasonings: let the salt work on its own first, then apply your other steak or fajita seasonings just prior to cooking. With those other spices, you’re mostly looking to add flavor to the exterior anyway.

Here’s how you do it:

1. Apply 1/2-3/4 tsp of salt per pound of meat, spreading it evenly over the surface — top, bottom, and sides. It’s not a crazy amount of salt, but most likely more than what you’d normally add. Use kosher or table salt; whatever you have is just fine. Note that salt will penetrate skin; so go ahead and apply directly to the exterior of poultry that has the skin still on. (As an added bonus, the salt will dry the skin, making it extra crispy and delicious.)

2. Stick in the fridge — no need to cover — for anywhere from 2-24 hours (whatever your schedule and fridge space allows for). Note that large pieces like whole turkeys, chickens, pork butts, etc. can be salted up to about 48 hours in advance with no ill effects.

3. Remove meat from fridge and cook!