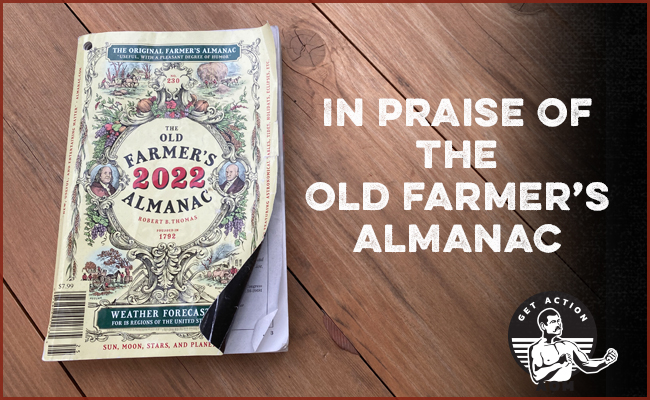 While shopping at a grocery store a few months ago, my 10-year-old son, Gus, bought a copy of The Old Farmer’s Almanac with his allowance.

Since then, the kid has read it almost every night. His copy is now well-worn and tattered.

He’s been taking it over to his grandparents’ house to read it with his grandpa too. Jaju has reported that he’s been enjoying these Old Farmer’s Almanac sessions with Gus. “It’s such a fun magazine to read,” he told me.

When Gus isn’t paging through it, I’ll filch it from his room to enjoy on the porcelain throne. Excellent bathroom reading material.

What is it about this magazine/reference book that’s been in publication since George Washington was president — making it the oldest, continuously published periodical in America — that appeals to my Fortnite-playing, YouTube-watching, Generation Alpha son? As well as his Millennial dad and Baby Boomer grandfather?

To figure out the enduring, inter-generational allure of The Old Farmer’s Almanac, I did a deep dive into its history and contents. Here’s what I found out.

The History of The Old Farmer’s Almanac

The Old Farmer’s Almanac was founded in 1792 by Robert B. Thomas. When it debuted, the publication was simply called The Farmer’s Almanack. The “k” at the end of “Almanack” would be dropped, and as we’ll see, the “Old” bit got added later. 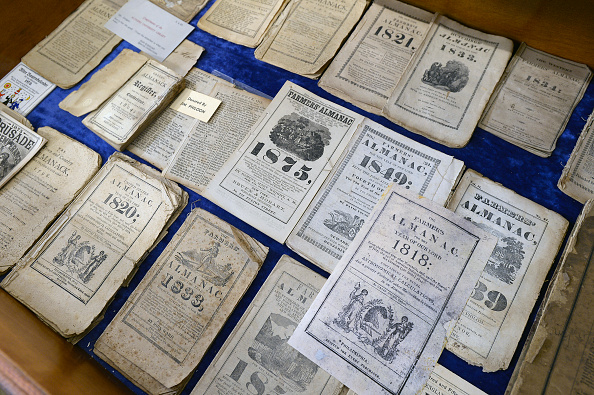 Back in the 18th and 19th centuries, almanacs — annually published reference books filled with calendar-based info like weather forecasts, agricultural planting dates, and oceanic tide tables — were a big business. Next to the Bible, they represented the most widely read literary genre in America. Running an almanac at the time was kind of like running a blog back in 2010; it seemed like everyone and their mom had one. The most famous almanac creator was of course old Ben Franklin, who pseudonymously produced Poor Richard’s Almanack. 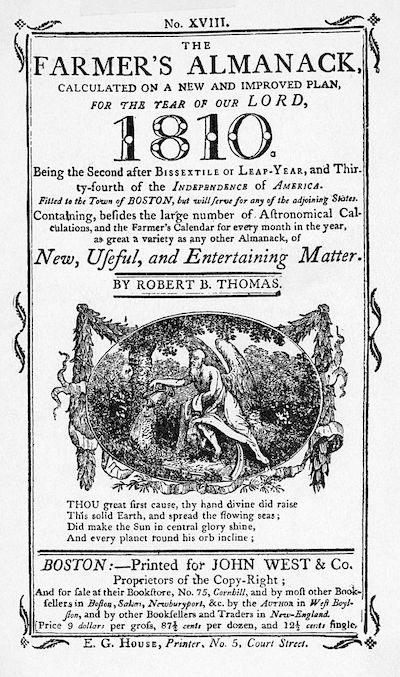 Despite facing stiff, sizeable competition from other almanacs for readership, The Farmer’s Almanac rose to the top of the pack. What was the secret to Thomas’s success? Likely his guiding principle of making his almanac “useful, with a pleasant degree of humor.” Besides providing standard almanac fare like sunrise/sunset times and weather predictions, Thomas’s version offered articles filled with helpful info on farming and light-hearted short stories.

In 1832, Thomas added “Old” to the title of his almanac to highlight the way it had outlasted many competitors over its forty-year run, and to distinguish it from those rivals which remained. In fact, the second oldest continuously running almanac in America is called Farmers’ Almanac. You can often find it for sale in a magazine rack right next to The Old Farmer’s Almanac.

In 1848, Robert B. Thomas died, and Henry Jenkins became the new editor-in-chief of The Old Farmer’s Almanac. Jenkins introduced the distinctive “four seasons” cover design that’s still used as the cover of the periodical today.

Several editors stood at the helm during the rest of the 19th century. In 1900, Robert Ware took over and broadened the almanac’s appeal by including more general interest pieces and fewer articles on the science of farming.

In 1939, Robb Sagendorph, founder of Yankee magazine, acquired the publishing rights to The Old Farmer’s Almanac. The headquarters for the magazine was moved to Dublin, New Hampshire, where they’ve been ever since.

What Makes The Old Farmer’s Almanac So Dang Appealing?

The answer to this question is “easy,” Gus says. “It’s the weather predictions.”

There was one year, 1938, where The Old Farmer’s Almanac experimented with not publishing its famous long-term weather forecasts, and the result was a reader uproar. Like Gus, most people, both then and now, buy the publication for this feature.

There’s something magical about flipping through the pages of a book that makes predictions for the weather a year in advance. When I was a kid, I’d flip through the latest edition of The Old Farmer’s Almanac to see if Oklahoma would have a white Christmas. Usually, the answer was no. I still do that as a nearly 40-year-old man.

The Old Farmer’s Almanac has been making long-term weather forecasts since the first edition was printed in 1792. According to Old Farmer’s Almanac lore, Robert B. Thomas developed a super-secret formula to predict the weather based on the study of astronomical cycles, solar activity, and climatological patterns. The original formula is supposedly locked in a black box at Old Farmer’s HQ. It is still used today, along with insights from the latest meteorological, sunspot, and climate science.

The predictions focus on temperature and precipitation, and are issued for 16 weather regions in the United States. We live in region 11, the Texas-Oklahoma weather region.

Outside researchers have looked at the weather predictions made by The Old Farmer’s Almanac and found their accuracy to be slightly over 50%, or about the same as Punxsutawney Phil predicting whether we’ll get six more weeks of winter or not.

I don’t think people particularly care how accurate the predictions are. They just like to read them because they’re fun.

The impression I get of The Old Farmer’s Almanac staff is that they take their job of predicting the weather seriously, but not too seriously. The predictions are given with a bit of folksy, New England dry-humor. I think they really do aim for the highest accuracy rate possible by studying historic patterns and the latest science of sunspots and climatology, but they also appreciate the futility of trying to predict the weather months in advance. As the editors noted in their bicentennial edition: “neither we nor anyone else has as yet gained sufficient insight into the mysteries of the universe to predict weather with anything resembling total accuracy.”

But yeah. It’s fun. The weather predictions are undoubtedly what’s made this magazine a hit for over two centuries.

Why Is There a Hole in the Left-Hand Corner of The Old Farmer’s Almanac? 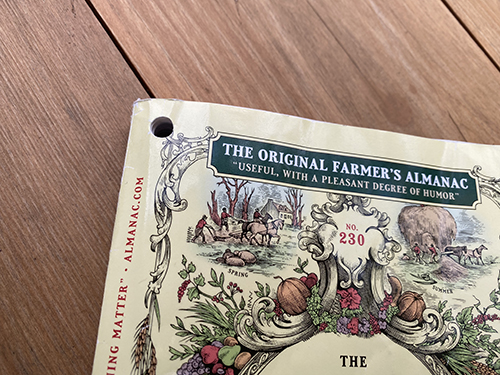 You might notice that your copy of The Old Farmer’s Almanac has a hole in the left-hand corner.

According to lore, early readers found The Old Farmer’s Almanac so handy and useful that they started punching holes in the corner of their copies, tying a string through the hole, and hanging their copy some place handy like the kitchen, workshop, or outhouse.

The Old Farmer’s Almanac started pre-drilling the hole in the magazine for readers. They still do it today. So that hole is there to hang up your almanac next to your toilet.

Fun fact: In the 1990s, the editors toyed with the idea of removing the hole from the magazine because it cost $40,000 a year to include that step in the printing process. But when they surveyed readers as to their feelings on the subject, folks overwhelmingly wanted to keep the hole.

While the weather predictions are the star of the show, The Old Farmer’s Almanac isn’t a one-trick pony. Besides the predictions, it also offers a bevy of useful information, like the sunrise and sunset times throughout the year, frost and growing seasons, and the best days for fishing and planting based on the moon’s phases. You can also get dates and times when the various planets are visible in the sky and when solar and lunar eclipses will occur.

Sure, you could look up this kind of stuff online, but it’s much more pleasing to flip through paper tables of such facts and figures. (TOFA does have a website, but who wants to read an almanac on the internet?)

The Old Farmer’s Almanac also offers suggestions for the best day to do various activities based on astrology; like its weather predictions, you don’t have to take these suggestions too seriously to enjoy them.

For example, if you’re looking to have dental care done in 2022, the almanac lets you know that the best dates to make an appointment are October 20-22, November 17-18, and December 14-16. So if you want to avoid sub-optimal trips to the dentist, you’ve been warned.

The magazine also gives the best days to do things like wash windows, cut your hair to encourage its growth, ask for a loan, wean animals, and set posts. You know. The essential stuff.

You can spend weeks poring and re-poring over all the helpful and interesting miscellany in The Old Farmer’s Almanac.

Throughout the almanac, you’ll find general interest articles covering a wide variety of topics. You’ll of course find articles offering tips on how to grow flowers and pumpkins better. But you’ll also find cooking recipes and bits of trivia like a piece about “Sergeant Stubby,” a dog that served as the mascot for the 102nd Infantry Regiment during WWI. Stubby saw action in 17 battles, was awarded medals for bravery, met three U.S. presidents, and became the only dog to be promoted to sergeant through combat. I’d never have known about this amazing and distinguished canine if it weren’t for The Old Farmer’s Almanac.

In a media world where it seems like everything is tinged with angry partisanship, The Old Farmer’s Almanac is refreshingly and wholesomely apolitical.

Need a Spiritualist? The Old Farmer’s Almanac Has Got You Covered

Like most magazines, The Old Farmer’s Almanac has ads. You’ll find the kind of ads you’d expect to find in such a publication — ads for farm storage, wood stoves, deer repellents, etc.

My favorite ads, though, are the classifieds in the back. They’re primarily ads for astrologists and spiritualists. If I ever need to remove a hex or reunite with a lost lover, I know I can look up Jada Taylor — psychic empath Wicca master — in The Old Farmer’s Almanac to help me.

Yeah, this is quackery, but there’s something endearing about the fact that folk magic is still alive and well in disenchanted 21st century America.

I sure am glad Gus bought that copy of The Old Farmer’s Almanac. It’s nice to have around the house and thumb through, and it’s fun to continue an old American tradition.

Do yourself a favor. The next time you’re at the grocery store, pick yourself up a copy. After you check if your state will have a white Christmas, keep it by the toilet, on a hook on the wall, for months of daily-constitutional-accompanying entertainment.