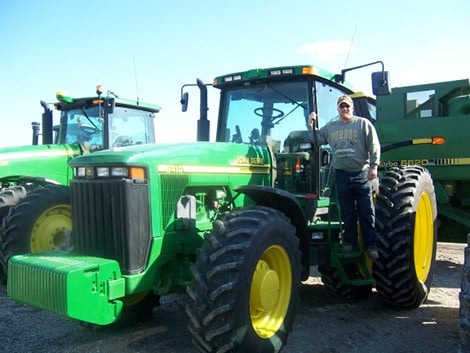 Farming is not only a manly job, it is arguably the first stepping stone towards advanced society.  When men put down spears and picked up plows, it allowed communities to stop wandering. At the turn of the century, 39% of Americans  worked in agriculture; today, less than 2% do. But while farming is a vastly different industry today, the qualities that made men successful back then are still helping them now.

For this week’s “So You Want My Job,” AoM reader Paul Leonard interviewed Brian Bradley, a life-long farmer and family man.  Mr. Bradley farms 1,800 acres of corn and soybeans in Indiana. Thanks both to Paul for doing the interview and Mr. Bradley for taking part in our series.

1. Tell us a little about yourself.  (Where are you from?  How old are you?  Describe your job and how long you’ve been at it, etc.)

I was born and raised on the farm in Montgomery County, Indiana.  I live half a mile down the road from where I grew up in a farmhouse built in 1865 that’s been in the family for five generations.  I’m 40 years old and have been farming for as long as I can remember.

My job involves being part agronomist, economist, banker, mechanic, entrepreneur and common laborer.  Planting and harvesting are only a fraction of what goes into farming every year.  The role that makes a farmer succeed or fail is much more on the business side of things.

2.  Why did you want to be a farmer?  When did you know it was what you wanted to do?

I don’t ever remember thinking this isn’t what I wanted to do.  My dad was a farmer, he still helps me everyday, and I grew up helping him from as young as I could be useful.  There are a few other jobs I’ve had, mostly recently, working in a steel mill, but I never enjoyed any of them like farming.

What time of year is it?  That’s part of what I like about farming, the schedule is constantly changing, and so you never get bored doing the same thing too long.  In the spring most days are spent getting equipment ready for planting.  When the weather is right we’re in the field planting and drilling seed from sun-up to sundown.  After that we go back and spray for weeds, fertilize and spray for weeds again.  In between those periods we cut and bail hay to feed the cattle during winter.  In late summer, we get equipment ready for harvest and usually take some vacation time.  Then, when it’s time to harvest, we’re in the fields to sundown again.  The winter tends to be the slowest time, but there’s still lots of work hauling the corn and beans to elevators, taking care of the business side of things, getting finances and seed in order for next spring and having a little fun on the snowmobile too.

It’s great being your own boss, being able to take time for family events, and having a flexible schedule.  But there’s something special about the tradition of it as well.  Farming is such a time-honored tradition, and it gets in your blood. There’s something very fulfilling and profound about it.

(long pause…)  There’s not much about it that I don’t like.  That being said, it’s not much fun wading through the red-tape associated with government programs.  And most farmers essentially get paid once a year, so it can be difficult to plan and budget a year in advance.  It gets tougher every year to find ground to farm, but if you don’t grow you will eventually collapse.

Listen to our podcast with farmer Forrest Pritchard:

6.  What is the biggest misconception that people have about farming?

I’ve always been surrounded by the farming life, so I’m not sure what people’s conceptions about farming are.  But a lot of people are surprised at how complicated farming has become.  There’s so much more to it than putting a seed in the ground and then picking the produce several months later.  There’s a huge economics side to it; we’re constantly watching the markets trying to get the best price for our product and finding the lowest prices for seed, fertilizer and equipment.  Tractors have GPS-guided driving systems now, and many varieties of seeds are bio-engineered.  Fertilizers, soil types and weed-killers require an understanding of chemistry. The industry is constantly changing.  My grandfather would be clueless about a lot of the farming practices we use today.

I suppose some folks have the image of farmers as being country-bumpkins in overall-bibs and straw hats chewing tobacco…well, the tobacco part isn’t too far off.  But most farmers these days are college educated and spend as much time doing business in an office as they do bouncing up and down a field in a tractor.  I know some farmers who haven’t driven a tractor in years.

When my kids were babies, I had a car seat installed in the combine and they’d sit with me for hours on end while I harvested.  During planting and harvest time, farmers are exclusively focused on the task at hand unless the weather turns bad.  Other than those 4 weeks of the year it’s a pretty laid-back schedule.  There’s always something that needs to be done, but I can always find time for a cup of coffee or a friendly poker game in town.

8.  Can a man with zero farming experience decide one day to become a farmer?  If it is possible, how would he go about making that happen?

It’s pretty tough, but with enough capitol anything is possible.  If he were a young man I’d recommend going to college to study agro-business.  If he’s further along in life, I’d say go buy 1,000 acres of land and rent it out.  Then ask the farmer you’re renting to if you can shadow them for a couple growing seasons.  There’s really no way to learn it except by doing it.  I have a friend that started out in his early 20’s with no knowledge or experience.  He got hired on as a farm hand and started buying and renting land when he could.  He’s a successful farmer today, 20 years later, but it was tough.

(Side note: an acre of tillable land in our area sells for around $4,500 today.  So 1,000 acres will set you back 4.5 million dollars.  A new combine runs around $300,000, and you’ll also need at least one good tractor, a planter, a plow, disk, sprayer, fertilizer a couple grain trucks and other miscellaneous equipment.)

If that isn’t possible, there are lots of jobs in industries related to farming.  Lots of people work for co-ops and elevators and businesses that sell to and buy from farmers.  It’s not the same kind of work, but we all tend to have a similar perspective on life.

9. Small farmers are a dying breed, gobbled up by giant agribusinesses.  There are lots of challenges facing small farmers today.  What are some of those challenges?  What are the prospects for the future of this profession?

For the last 30 years it’s been about vertical integration.  Farmers used to grow a little corn, a little hay, some oats, beans, raise some pigs, cows and have a nice big vegetable garden.  Today the name of the game is specialization.  In our area everyone grows corn and soybeans and that’s all they grow.  That trend will continue.  The economies of scale will continue to ramp up as seed, fertilizer and equipment gets more expensive.  Each farmer will have to farm more and more acres to make the same profit.  The plus side is that everybody’s got to eat.  Ethanol may or may not continue to play a large role in farming depending on what happens with corn-based fuel.  Biotech will continue to improve yields and prevent loss due to insects, disease and drought.  Overall I’d say the picture looks bright for everyone in the farming industry.

Farming is as much a mentality or lifestyle as it is a profession.  Most farmers that I know have faced numerous setbacks, but they are really good at problem-solving.  It may not be the best, prettiest, safest or most effective solution, but at the end of the day they are incredibly resourceful or they don’t survive.