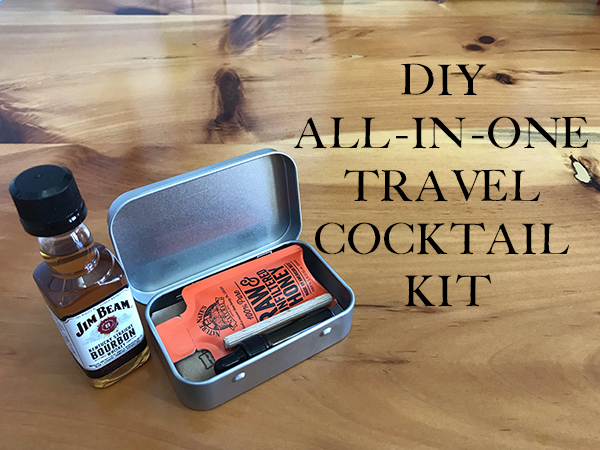 As the holiday season quickly approaches, over 50 million Americans will take to the skies to spend Christmas and/or New Year’s with friends and family. Of course, traveling by air these days tends to be a less-than-enjoyable experience. So, understandably, many of those 50 million people try to make the experience merrier with in-flight drinks! While most airlines don’t mix up cocktails (unless you’re in first class or on a luxury carrier), beer, wine, and spirits of all kinds are often readily available.

With that fact in mind, sets of purchasable, pre-made travel cocktail kits emerged several years ago that are pretty clever: an Altoids-like tin contains the supplies needed to make a particular cocktail; just mix these contents with a tiny bottle of booze you buy from the flight attendant, and you’ve successfully upgraded your in-flight drink. For example, a kit might include bitters, sugar, and citrus, to which you add some whiskey, and you’ve got yourself an Old Fashioned!

The problem with these kits is that they’re really expensive, even before you add in the spirit that you’ll need to purchase in-flight (you aren’t legally allowed to provide your own alcohol on an airplane). At $20+ for a kit that makes two drinks, by the time you buy the mini bottles of booze (about $6 each), you’re looking at $16 or so per cocktail. That’s around twice the average price of a drink you’d buy at a bar, and you had to mix it yourself and drink it from a little plastic cup.

Another con of these gifts is that they only provide ingredients for one type of cocktail. How do you know what you’re going to want while traveling, before you’re actually traveling?

As these kits are largely given as gifts, we wanted to see if we could make them both less pricey and more functional — something you can give to many people in your life without breaking the bank, and that will be appreciated by recipients as more than a novelty.

How to Make an All-In-One DIY Travel Cocktail Kit 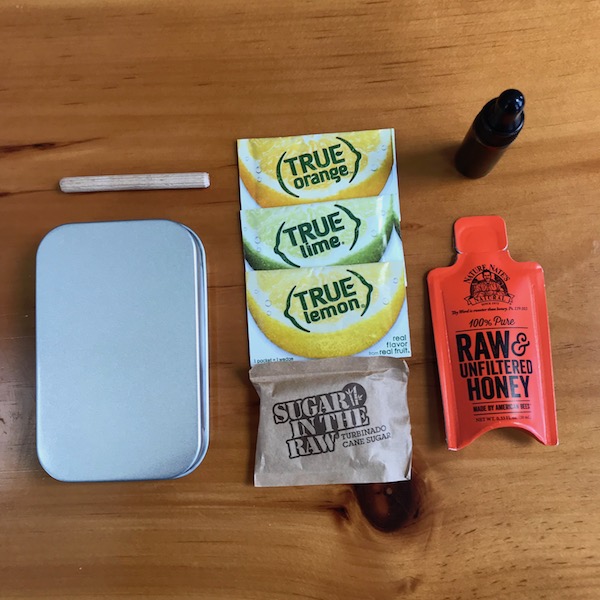 Some of the contents that come in the pre-made kits, like linen coasters and fancy mini muddlers, hardly seem worth it. In my humble opinion, adding a linen coaster to a crappy little fold-down tray and stirring your drink with a little metal spoon is not going to make you feel like you’re living in luxury. Those extra flourishes are mostly there simply to up the “cutesy” factor of the gift.

We’re going to pare down the kit to the practical essentials, and by DIY-ing them, lower the cost to just $4 each — 1/5 the price of the retail variety!

At the same time, we’re going to up the functionality level of our DIY kits.

Why have a kit that’s only equipped to create a single cocktail, when you can actually make a pretty robust all-in-one kit capable of creating a whole variety of them? Again, dedicating a kit to a lone cocktail is about upping the cutesy factor — “I know you like gin and tonics, so here’s a kit that makes a gin and tonic!” But people rarely only like one single kind of cocktail, and an all-in-one kit furnishes its own fun factor, allowing your loved one to decide on the, ahem, fly, which cocktail they happen to be in the mood for that day.

Below I present how to make this super easy, inexpensive, one-of-a-kind, all-in-one DIY travel cocktail kit. You can either enjoy it yourself, or make a handful (the ingredients are actually hard to buy for making just a single kit) and gift them to friends and family members.

The key to really making this work is to utilize the magic technology of the consumer food industry: packets. You can find almost anything your heart desires in a packet these days. It’s pretty incredible, really, once you start digging around on Amazon.

And what really makes a cocktail, in many cases, is the citrus — lime, lemon, orange, etc. Some airlines offer fresh citrus; most don’t. So while you could theoretically slice and bag a lemon or lime on travel day, it’s not real convenient. With citrus packets that replicate one wedge per packet, you have a world of cocktails available to you. I did some testing at home to ensure quality (tough gig, I know!), and while the packets aren’t perfect replications, they certainly get the job done and make for a tastier drink than you would otherwise get on an airplane.

The materials listed below for an all-in-one kit will make a pretty wide variety of the most popular cocktails (you’ll find specific suggestions for drinks to make with them in the next section):

A small note about liquids and going through security: According to the internet, the jury is out on whether or not you’ll need to pack the liquids (honey, bitters, etc.) in a separate bag along with your other liquids. Plenty of folks just leave it all in the tin and have passed through security just fine. Up to you if you want to risk it or not. 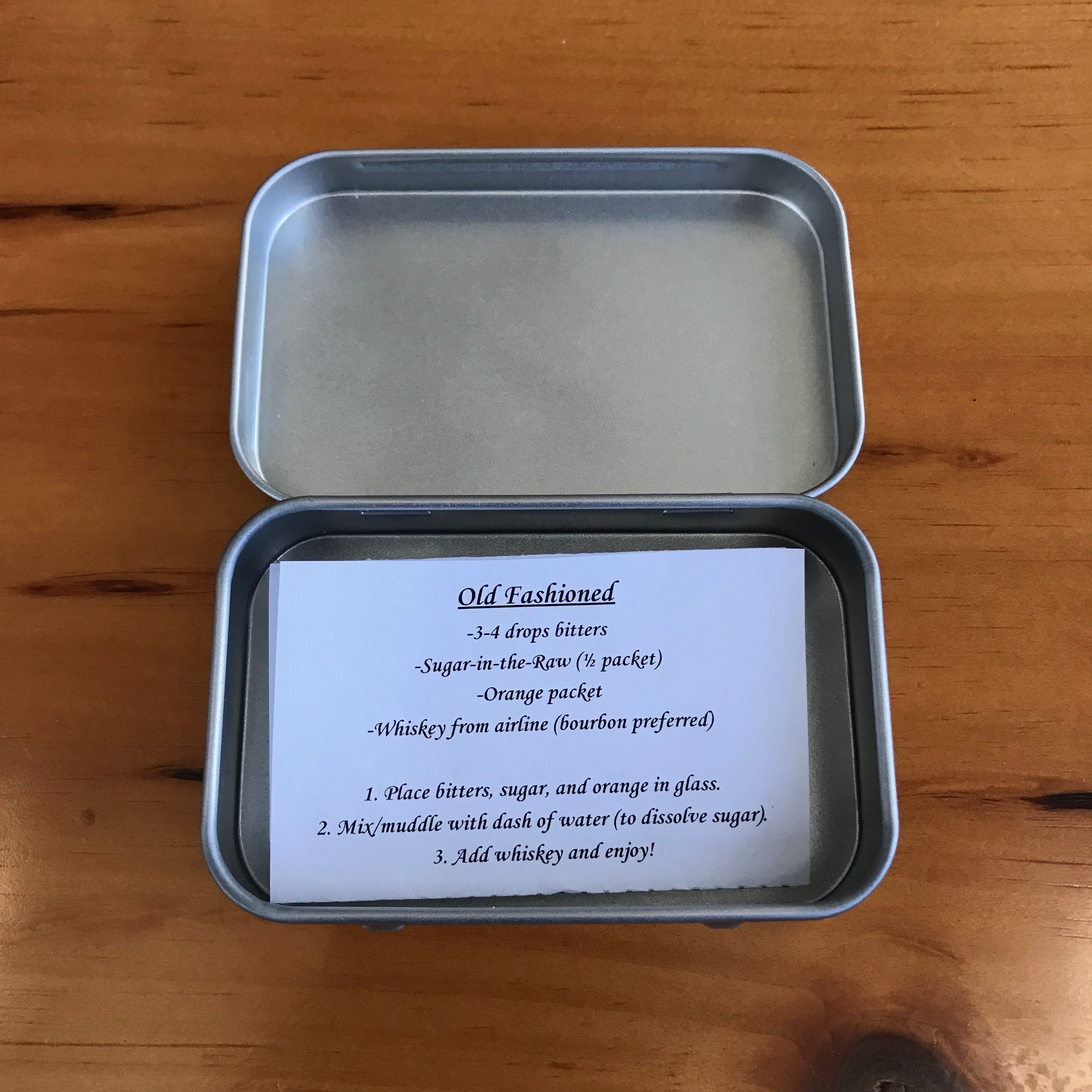 The best thing about this kit is how easy it is to put together. First, print, cut, and fold the recipe card which we’ve created. Place it in the bottom of the tin.

Then, simply throw in the tools and ingredients listed above. If you know the recipient of the kit likes certain cocktails and not others, tailor the kit’s contents to their preferences.

The only tricky part is getting bitters (or other liquids) into the small bottle; just use a funnel or a mini measuring cup.

The all-in-one kit can make all of the following cocktails, and others as well! 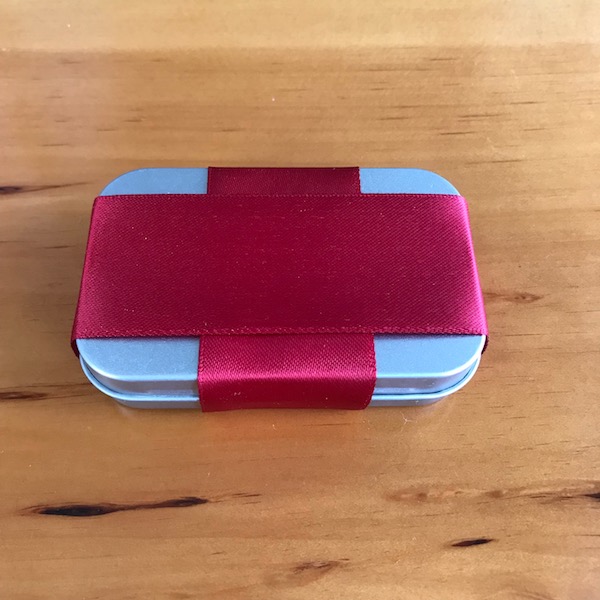 For gifting, I think it’s fun to do a simple wrap of red ribbon. The recipient knows it’s an Altoids tin with something inside (they can even shake it), but there’s plenty of mystery as to what!

The options are as limitless as the palette of your friends and family. With just a little bit of thought and prep, you can make them a very unique carry-on that’ll add a nice shot of merriness to their flights!