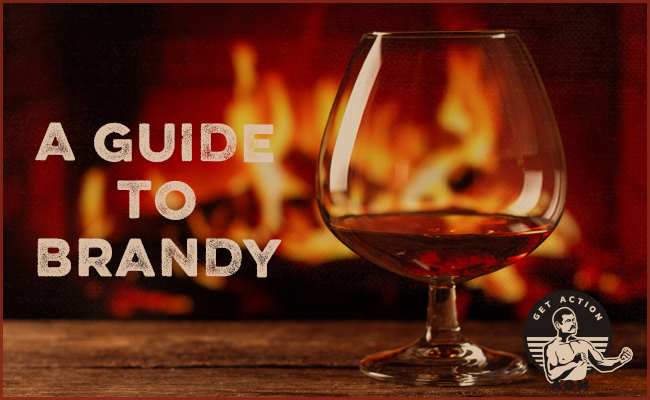 Claret is the liquor for boys, port for men; but he who aspires to be a hero must drink brandy. —Samuel Johnson

Of all the spirits, brandy has perhaps the stuffiest, most aristocratic image. What comes to my mind is old men in velvet jackets, gently swirling oversized goblets of a rich mahogany-colored liquid in front of a roaring fireplace.

And yet, this old-school drink is quietly becoming a giant in the beverage industry, surprisingly outselling the likes of Scotch and gin. Chances are high that you’ve heard famous brands like Hennessy and Courvoisier pop up in hip-hop lyrics.

And yet, it’s quite possible you don’t actually know what brandy is.

In this article, I’ll not only define the spirit, but also give some tips on how to best enjoy it and a couple classic cocktail recipes.

With its combination of sweetness and a rich, oaky flavor, brandy is a great drink to enjoy around this holiday season.

Brandy is the overarching term for any spirit that’s been distilled from fermented fruit juice — typically grape or apple — and then aged in oak barrels (like whiskey) for a minimum of two years. When you see “brandy” alone on a bottle, it’s referring to the grape version. In America, brandy made from apples is often cut into a neutral grain spirit and called applejack. If made from any other fruit, it’ll say so on the bottle — “Peach Brandy,” “Cherry Brandy,” etc.

Whereas straight fermented grape juice (wine) and fermented apple juice (hard cider) will be anywhere from 5-15% alcohol by volume, brandy is additionally run through a still, bringing it up to at least 40% alcohol by volume. And while with wine and even port (fortified, higher alcohol wine) you get a lot of grape flavor, in brandy that taste is less obvious since the alcohol percentage is akin to a whiskey and other hard liquors.

Brandy has traditionally been considered a digestif. That’s a fancy French term that just means it’s a drink to be consumed after dinner, and generally neat. At one time, the category of digestifs was thought to aid in digestion, and while some in fact do, brandy does not. Since it’s a sweeter spirit than most, however, it does make for a good, dessert-like post-dinner beverage.

Within the realm of brandy, there are a couple branches of drinks, like the applejack mentioned above, Armagnac, and more, but the one that most people will be familiar with is Cognac (pronounced “cone-yak”).

Cognac is considered to be on the highest end of the quality scale when it comes to brandy; so when you’re perusing the shelves at the liquor store, it will generally be on the top shelf, carrying the highest price tag along with it. A premium bottle will cost you about the same as a premium bottle of whiskey — somewhere between $45-$75.

How to Buy Brandy (And Read a Brandy Label)

Brandy labels are admittedly not terribly easy to figure out. The primary countries of origin you’ll find on sale here in the States — France and the US — have different regulations about aging, labeling, etc.

The easy part for the beginner brandy drinker is that you won’t have a ton of options to choose from at your local liquor store. Whereas entire aisles of different types of whiskey might be available, your brandy selection is likely just a handful of brands and varieties.

How Cognac is Labeled

Anything with the “Cognac” label, as noted above, is made with grapes from that specific region in France. (This can actually be a little confusing, because you’ll often see labels that say “Champagne Cognac,” which can lead a brandy newbie to think it’s a fizzy drink. It’s not. It’s just a sub-region of Cognac.)

The production and labeling of Cognac is very strictly controlled by a governing body in France, and the product must meet the following requirements:

Cognac is almost always a blend (that is, what’s in your bottle is not derived from a single cask, but rather a number of them) and what you see on the label is the age of the youngest liquor in that bottle (a minimum of two years).

Unlike with whiskey, however, brandy makers don’t just give the age in a number right on the bottle. Instead, they rely on a few abbreviations:

If these classifications seem sort of silly, as they do to me, it’s because they’ve been in use for a couple hundred years.

How Other Brandy Is Labeled

Confusingly, only Cognac (and brandy from other French regions) uses these types of labels. Some American distillers will try to mimic the labeling convention, but it doesn’t necessarily mean the same thing and isn’t actually regulated, making it mostly a marketing ploy.

So any brandy made in America or elsewhere likely just says “brandy”; if it’s a different fruit, it’ll say that, but not necessarily much else. You definitely won’t always know about the age of the spirits, which means you have to sort of rely on price. The cheap stuff is going to be aged closer to the minimum of two years; mid-range bottles will likely be aged 4-6 years; premium American brandy is probably aged about 10 years.

As noted above, if it’s called an “Applejack,” that’s different from “apple brandy.” Applejack is a blend of apple brandy and a neutral grain spirit, whereas “apple brandy” on the label would mean the pure stuff. That doesn’t mean that applejack is a lesser product, just a different one.

How should the beginner start with brandy, then? While you can find bottles of brandy for $10 or $15, don’t start with those. You’re setting yourself up for failure, just as if your first whiskey was a cheap bottle of Canadian Mist. You also don’t need to start with the premium Cognac (though you sure can!). For research, I bought bottles in a few price ranges, and the $25 bottle was definitely better than the $10, but not noticeably different from the $45, which seems to mirror my experience with whiskey too — you can get a very good spirit for $25-$30.

In terms of taste, the cheaper brandy is going to be sweeter; since it’s not aged as long, you’ll get more of the grape (or other fruit) flavors. On the higher end, the spirits are more whiskey-like. They’re definitely still sweeter and fruitier than a standard whiskey, but the difference isn’t necessarily as noticeable.

How to Drink Brandy (+ Cocktail Recipes)

Brandy gets its stuffy reputation because of the way you’ve seen it depicted being consumed: neat, from fancy snifter glasses. The wide bowl of a snifter glass allows the more volatile compounds of the spirit to quickly evaporate, while concentrating the delicious aromas at the tapered top of the glass.

So there’s a reason for the snifter, but that doesn’t mean it’s how you have to drink it.

As with any spirit, it’s really about what you enjoy and how you best like to drink it. There are opinions aplenty about types of glasses, ice vs. no ice, etc. But for actually sipping and tasting, the “rules” across all the spirits are pretty similar: Start with a hearty sniff. The first whiff will be largely alcoholic and will likely clear your nostrils a bit. After that, sniff it a few more times to really get a sense of the fruity aromatics along with the woody and caramel-vanilla notes from the oak barrels the brandy is aged in. From there, give it a sip, and let the liquid linger in your mouth a bit before swallowing (it’s when it hits the back of the throat that alcohol can “burn” some; though with a premium brandy that’s not likely to happen).

Even though I’m not a purist by any means, I do always recommend first tasting any spirit neat to get a real sense of its aromas and flavors. From there, do what you will. For me, that usually means serving a couple ounces over a large ice ball in a double old fashioned glass.

While there used to be a ton of brandy cocktails, most restaurant and bar menus these days are notoriously lacking. Brandy-based cocktails also tend to be somewhat complicated and use ingredients that you may not have around. That said, the two cocktails below are worth learning about, making at home, and ordering when hitting the town. (Ordering a brandy cocktail will make you seem sophisticated . . . or old fashioned. Which may not be such a bad thing!)

Of the various brandy cocktails out there, this one is assuredly the most distinct and flavorful. To be honest, I only initially made it because I happened to have some French absinthe in my liquor cabinet (many thanks to my in-laws!) and needed a way to use it. Turned out to be one of my favorite and now go-to cocktails in all of drinkdom.

With origins dating back to pre-Civil War New Orleans, it’s one of the oldest American cocktails out there. While nowadays it’s often made with rye whiskey as the liquor, the original recipe calls for Cognac. Pretty much every sazerac recipe you’ll find is different, but what I’m presenting below is the oldest known version and the one that the International Bartenders Association recognizes. It’s really good; when I first served it to friends, they actually remarked, “Oh wow. Why is this so good?!”

This cocktail can seem a hair more involved than others, but it’s well worth it, and every step is indeed necessary (I tried lazier variations that weren’t as good).

Note that if you leave out the absinthe, this is basically a brandy old fashioned, which is also delicious.

A classic brandy cocktail that you’ll see on a lot of menus and is probably better known than the sazerac. As with the above cocktail, it’s one that’s now often made with whiskey rather than brandy, but your best bet is to stick with its original formulation. It falls into the “sour” category of cocktails because of the generous amount of lemon juice, but it’s a drink that’s crazy simple and appeals to a lot of palates.

Mix all the ingredients and serve neat in a coupe-type glass. Or, serve it over ice in your old fashioned glass. Whatever floats your boat.