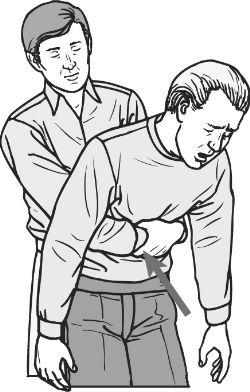 You’re in a restaurant enjoying a dinner with friends, when all of a sudden you hear a woman shriek: “He’s choking!”

You calmly excuse yourself from the table and dash with effortless cool towards the source of the loud yell. You find a man with a look of terror in his eyes, gripping his throat, indicating that something is lodged within. You politely ask the distraught woman to step aside. You place your arms around the choking man’s abdomen and give two deft inward thrusts. A scallop shoots out of the man’s mouth and lands conveniently in a trash can. The restaurant bursts into applause.

You heartily pat the man on the back and say something witty to lighten things up. You stroll back to your friends’ table, sit down, and pick up the conversation right where you left it. “What were you saying about the true meaning of The Old Man and the Sea, John?”

At least that’s how we imagine we’d handle a situation if we saw someone choking. More likely though, you’d probably stand there havy cavy, not sure what to do. Because even though most have heard the phrase Heimlich maneuver countless times, and seen it dramatized just as many, a lot of folks really don’t know exactly what to do beyond putting their arms around the person and squeezing somehow. And if you do know precisely how to do it, you may only be familiar with the technique used on an average person.

So today’s the day you’re finally going to commit this important and potentially lifesaving skill to memory, and not only that, learn how to do it in six different situations–on an average person, an obese person, a baby, a pregnant woman, a dog, and even yourself. Bet you never thought about giving the Heimlich to your pooch did, you? Well now Fido can sleep easy at night, with visions of gristly bones dancing in his head.

First: Assess the situation and allow the person to try to dislodge the object on his or her own

This is the first step for all six situations: If you see someone who might be choking, don’t bust out the Heimlich right away. He might not need it. First, ask the person if he can speak. If he can speak, it means he still has good air exchange and might be able to get the object out of his throat on his own with some coughing. Ask him to try to cough the object out.

If the person can’t speak, makes high-pitched sounds when he talks or coughs, or it looks like he’s not breathing, it’s Heimlich time.

1. How to Perform the Heimlich Maneuver on a Regular-Sized Person

First thing you want to do is have someone call 911. If the person becomes unconscious, you’re going to need help.

The Red Cross recommends using the “five-and-five” approach to help a choking person. Here’s how it works:

Perform five Heimlich thrusts. If the back blows didn’t get the object out, it’s time to perform the Heimlich:

1. Stand behind the victim and wrap your arms around his waist.

2. Bring your hands together, with the hand closest to the victim’s stomach made into a fist. The knuckle of your thumb should be our positioned and pressed between the victim’s bellybutton and the bottom of his rib cage. 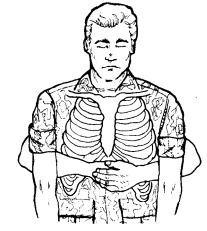 The knuckle of your thumb should be positioned and pressed between the victim’s bellybutton and the bottom of their rib cage.

3. Simultaneously squeeze and thrust your hands inwards and upwards. Repeat this action until the obstruction pops out like the cork from a bottle.

Repeat the five-and-five until the food or object is expelled or the person becomes unconscious. If the latter happens, hopefully the medics will be close at hand.

This technique can be used on adults and children one year old or older.

2. How to Perform the Heimlich Maneuver on a Pregnant Woman

Using the standard Heimlich maneuver can harm the fetus growing inside of a pregnant woman. We don’t want to do that, so we’re going to need to use a modified version of the Heimlich.

Do the usual five back blows. When you perform the thrusts, position your hands a little bit higher than you would with the normal Heimlich. The knuckle of your thumb should be positioned and pressed at the base of the breastbone, just above the joining of the lowest ribs.

3. How to Perform the Heimlich Maneuver on an Obese Person

Same way as you’d do it on a pregnant woman. Place your hands a bit higher, right under the breastbone.

4. How to Perform the Heimlich Maneuver on a Baby

One of the things I’ve learned about babies since having Gus is they like to put things in their mouth. If they can pick it up, it’s going in their mouth. Pen? In the mouth. Penny? Mouth. iPhone? Right in the mouth. So choking has been a big concern of mine. It’s also gone up even more since Gus has started eating solid foods. I’m afraid he’ll stuff a fistful of puffs in his mouth and start choking. So learning how to perform the Heimlich maneuver on a baby has been a priority for me. Here’s how it’s done.

For babies who are one year old or younger do the following:

Give the baby five gentle, yet firm back thumps. Sit down and rest your forearm on your thigh. Hold the baby face-down on your forearm. Support the baby’s head with your palm, but make sure you don’t cover the baby’s mouth or twist its neck.  Here’s how it should look: 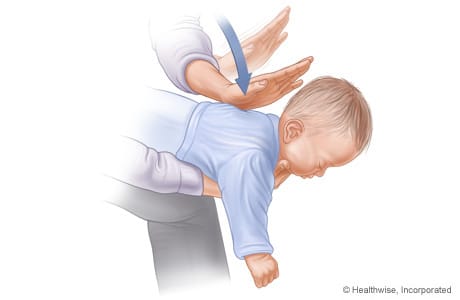 Proceed to give the baby five gentle, yet firm back thumps. The combination of gravity and the blows should be enough to dislodge the object.

Perform baby thrusts. If the object still hasn’t come out after administering the thumps,  hold the baby face-up on your forearm, keeping the baby’s head lower than her body. Place 2 or 3 fingers just below the baby’s breastbone and give 5 quick chest thrusts like so: 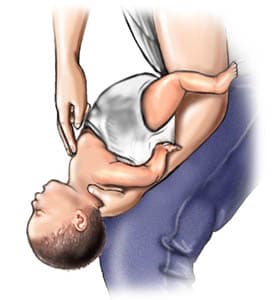 Repeat the back blows and thrusts until the object is dislodged.

5. How to Perform the Heimlich Maneuver on Yourself

You’re sitting at home in your favorite man chair while eating a steak and watching Bridge Over the River Kwai. Right at the movie’s climatic explosion you start choking on a piece of gristle. No one is around. What do you do?

While you can’t give yourself the five back blows, you can still perform the Heimlich thrusts on yourself.

1. Make a fist and place your thumb below your rib cage, just above the navel as you would when performing the Heimlich on someone else.

2. Grasp your fist with your other hand. Press it into the area with a quick upward movement.

3. If that doesn’t work, you can also lean over a table edge, chair, or railing. Quickly thrust your upper belly area (upper abdomen) against the edge, like this: 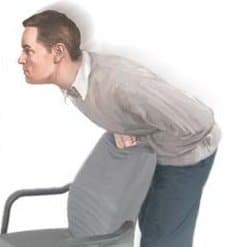 If you can’t get the gristle out of your throat, don’t worry. You died while eating a steak and watching one of the best war movies ever made. What a way to go.

6. How to Perform the Heimlich Maneuver on a Dog

It’s bound to happen sometime. Your pooch swallows a bone and starts choking. Lucky for you the Heimlich maneuver works on dogs, and you can take action to save your best friend.

Make sure your dog is really choking. Dogs eat weird stuff all the time and get things caught in their throat. Usually with some coughing and hacking, they can dislodge the object themselves. If your dog can cough effectively, leave him alone and let him do his thing. When he hacks up whatever was bothering him, give him a reassuring pat on the head.

If your dog doesn’t cough, but is instead pawing at his face, throat, and generally acting panicked, he might need some help getting whatever is stuck in his gullet out.

Check the mouth. Look inside your dog’s mouth for the obstruction. If you can see it, try to pull it out with your fingers. Don’t confuse the small bones in a dog’s throat for the foreign object. Pulling those will injure your dog.

Give your dog back blows. Just as you would with a human, give your canine friend five sharp blows on the back between the shoulder blades. You can try raising his hind legs above his head while doing this in order to put gravity on your side. 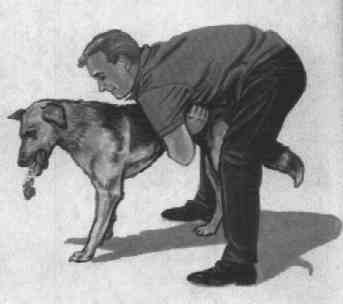 Nothing going on here. Just a man giving his dog the Heimlich.

1. Stand behind your dog and grasp him around the waist.

2. Place your fist just below the ribcage and give five quick thrusts.

3. Take your dog to the vet even if you get the object out. He’ll need to be examined to see if there were any internal injuries.

Have you ever performed the Heimlich maneuver on someone? How about on a dog? Share your experiences and tips with us in the comments.