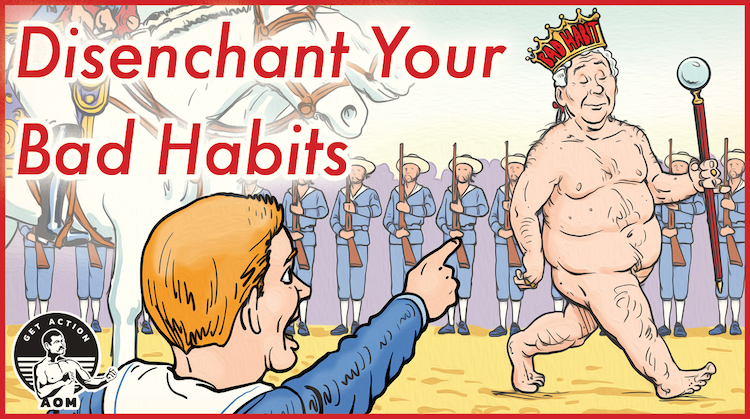 You’ve likely got some bad habits you’d like to get rid of.

Our typical approach to getting rid of bad habits is gritting our teeth and willing them out of existence.

But that approach usually doesn’t work. It’s hard to willpower a bad habit out of existence. In fact, this approach often backfires and only strengthens the desire to indulge in our less-than-ideal behavior.

Instead of squashing your bad habit with willpower, gently and gradually snuff it out by disenchanting it.

Your Brain Is a Reward-Seeking Machine

I learned about this idea of disenchanting your bad habits from Dr. Judson Brewer in a recent episode of the Art of Manliness podcast.

According to neuroscience, the corollary is also true: the less rewarding the behavior, the weaker the habit.

The best example of this is drug use.

Someone who abuses drugs turns to drugs to get a high, which feels good. But everything else about their addiction — what the drug is doing to their finances, their relationships, their professional life — feels very, very bad.

Drug use does something for the user, but overall, its effect is destructive.

A similar dynamic operates with our less serious habits.

We get something out of overeating, losing our temper, and scrolling social media, but, the effect of these habits is negative overall.

To get rid of a bad habit then, our job is to get our brains to stop focusing on the limited positive side of that habit, and to start focusing on all its negative aspects.

We need to update the reward value of that habit so that we understand, on a visceral level, that it actually isn’t doing much for us.

We need to disenchant the habit.

How to Disenchant Your Bad Habits

Once you realize that a behavior isn’t actually rewarding — once you disenchant it — your desire to do it will decrease.

According to Dr. Brewer, disenchanting your habits is something you can do proactively.

In his book, Unwinding Anxiety, he uses this idea to help people be less anxious. According to Brewer, anxiety is a maladaptive habit.

Something in our environment triggers us to feel uncertain, and this uncertainty makes us feel anxious. We respond to that trigger by worrying. Perhaps counterintuitively, worrying can feel rewarding. It makes us feel like we’re doing something to resolve the uncertainty we’re facing. And there’s a pleasure in that. Also, when we worry, we sometimes get consoled by friends and loved ones. That feels good, too. The reward we get from worrying is why worrying can become a habit.

But we all know that worrying doesn’t actually do much to resolve our problems and uncertainty in life. In fact, it can get in the way of us actually taking steps to fix our problems.

Even though there’s some sort of pleasure in scratching the worry itch, overall it makes us feel worse rather than better; overall, it’s actually not that rewarding.

According to Brewer, to break the habit of worry, you need to disenchant it. You need to adjust down the now-inflated reward value of the habit to its true, nearly-worthless level.

This process is easy. You simply bring your awareness to how you really feel on a visceral level whenever you’re worried. This is an embodied awareness, not simply an intellectual one. Pay attention to where you feel stressed in your body. Do you feel tension in your stomach? Are your palms sweating? Is your heart racing?

As you pay close attention to these negative experiences, ask yourself, “What do I get from worrying?”

The answer, you’ll realize, is not a whole heck of a lot. You recognize that it makes you feel like crap.

Congratulations. You’re beginning to update your brain’s reward value for worry. You’re training your brain to recognize that worrying in the face of uncertainty isn’t truly rewarding. The next time you experience a trigger, you’ll be less likely to resort to worrying.

Here’s an example of how I used this same disenchantment process to stop scrolling Instagram so much.

Whenever I found myself swiping through my feed, I started to pay attention to how I felt as I did so.

I noticed that I mostly felt like Jasper on The Simpsons. “200 channels . . . nothing but cats.” Bored. Bored. Bored.

I also noticed that I often felt annoyed by some people’s moral grandstanding or humble bragging or their posting of a picture of their ever-so-serious face accompanying a caption filled with banal platitudes about seizing the day, or whatever.

It’s some sort of Marshall McLuhan “the medium is the message” dystopia. I start to question the future of our civilization when I see professionals like attorneys, doctors, and even philosophers filming themselves lip-synching a SpongeBob SquarePants clip or some married couple doing a TikTok dance about their “relatable” married sex life because they’re in the business of spitting out relatable married couple fitness content brought to you by 1st Phorm. Ya basta!

Wait, where was I? Oh yes, my paying closer attention to the feelings I experienced while scrolling through social media. As I did this, I would ask myself: “What am I getting out of this?” It was obvious that the answer was nothing, and I let this reality sink more and more into my brain.

Soon, instead of checking Instagram multiple times a day, I’d only check it once a day. Then just a couple times a week. I had disenchanted the Instagram habit.

You can apply this disenchantment process to any bad habit you’d like to extinguish.

When you get angry, pay attention to the way cortisol is surging in your body, and making you feel like crap. Let the hurt expressions that your wife and kids evince in the face of your rage really absorb into your brain.

When you drink too much, and wake up in the morning with a hangover, instead of trying to ignore and soothe it, really lean into what you’re experiencing. Concentrate on your headache and how stupidly thirsty you are. Each time you feel irritable and tired as the day goes on, make a mental note of it.

The next time you find yourself engaging in any bad habit, stop and think about how little you’re getting out of it and how dumb it is, and let that reflection really marinate in your mind. Take a moment to recognize that the bad habit emperor who’s been ordering you around isn’t wearing any clothes.

Keep doing that over and over, until the habit is disenchanted, and your desire to do it is extinguished.

If you’ve had no luck trying to willpower your way out of a bad habit, try disenchanting it instead. It might be the thing that finally works for you. It’s been working for me, for sure.

And anything that can keep me off Reels is a massive win in my book.

For more on how to break the anxiety habit, and other habits as well, including tips on how to keep yourself motivated to stay with the disenchantment process, listen to our podcast with Dr. Judson Brewer: