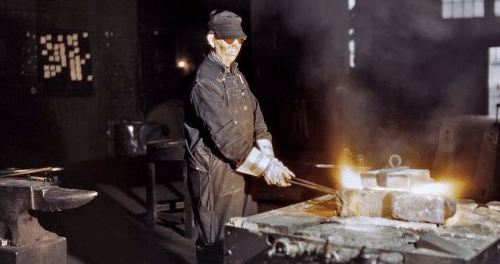 If you want to feel less restless and become more productive, it’s imperative that you break from your bad habits and develop good ones. When you have to decide every single day whether you’re going to go the gym, plan out your day, or read a good book, when you leave those choices up to your whims, to that day’s circumstances and your current mood, you’ll usually end up punting. It’s psychologically taxing to make the same decisions every day, and the more you fail to live up to your goals and break a contract with yourself, the less confident you become, and the less success you have with each new endeavor. As you begin to see yourself as a failure, it becomes a terrible self-fulfilling prophecy.

Men who feel like life is hard often have failed to form good habits. Every day is a struggle between what they want to do and what they end up doing instead. They can never find that groove, where the habits that make you stronger, healthier, and happier become almost automatic, giving you that feeling so central to a satisfied life: that of making continual progress.

If you’re not happy with where you’re at with your habits, below I’ve provided a few timeless tips that great men have employed to become the men they wished to be.

How to Develop a Habit

1. One thing at a time. Many men I know never change because they always try to improve everything about themselves at the same time. I do this too-you start feeling unhappy about your life and so you make a list of all the things you need to change, believing that starting the next day you’re going to totally transform yourself! It makes you feel really pumped. But changing one habit is hard enough; changing five at the same time is usually impossible. You’re juggling a bunch of balls and eventually you get tired and they all fall to the floor. And there you are, back at square one.

Dave Ramsey has a snowball debt plan in which he recommends paying off your smallest debt first. The idea behind the plan is twofold, that one, once the first debt is paid, you can take the money you were paying towards it and start using it to pay off the next debt, and two, that the satisfaction you’ll get from knocking out the first little one will keep you motivated to wipe out the rest. Cultivating new habits works in the same way. Start with the habit that will be easiest to gain; the confidence you garner from mastering it will carry over to your next hardest habit. Your confidence will keep snowballing; when you reach that hardest habit, you’ll finally have enough mojo built up to attain it.

It can be hard to place something you really need to tackle on the back burner, but you have to realize that doing so is the only way to ensure that you’ll finally be able to pursue it with success. Patience, young Padawan.

2. Launch your habit with as strong an initiative as possible. Just as a rocket needs a huge burst of energy to escape earth’s gravitational pull, man needs to exert a massive amount of energy in the beginning to break or create a habit. When developing a new habit or breaking an old one, we need to do something that shakes up our current mentality and makes us receptive to change. So go full-tilt in the beginning.  Kiss your soul-sucking friends goodbye, pack up the car and move, sign a year contract with a gym, throw away all the cigarettes (or in my case, the Diet Mountain Dew) in your house; whatever. Just make a big deal out of it.

3. Make a 60-day goal. That “21 days to develop a habit” theory you may have heard is probably bunk. The theory was created by a plastic surgeon turned self-proclaimed psychologist who wrote a book called Pyscho-Cybernetics. (The book is the 1960s version of the The Secret.) There’s no hard scientific evidence to back the claim.

In fact, a recent study done by actual scientists suggests that it takes on average 66 days to form a habit. The number of days depends on the type of habit you’re trying to form. Easy things like drinking a glass of water in the morning took less time compared to hard things like daily exercise.

So give yourself 60 days to form your new habit. 2 months is a long time to stick with something, but you’re a man-you’re up for the challenge!

4. Don’t break the chain! Once you resolve to form/break a habit, it’s imperative that you don’t make any exceptions for yourself. We don’t want to be like the drunken Rip van Winkle who excuses himself with every fresh dereliction by saying “It won’t count this time!” You might rationalize your “slip” to yourself and others, but deep down a record of it is etched into your brain, sending a message to your man spirit that you don’t really have the gumption to stick with your principles. Over time, these failures dull your motivation and sap your confidence.

Skipping one day makes it easier to skip the next and we soon find ourselves back where we started and frustrated with ourselves. Every single day counts. Any excuse will fracture your integrity (and thus your self-worth) and put you on the path to ultimate failure.

One way to motivate yourself through the excuses is to create a “Habit Chain.” As a young comic, Jerry Seinfeld made it a goal to write new jokes every day. To get himself into the writing habit, Seinfeld created a simple calendar system that pressured him to write.

Seinfeld would hang up a big yearly calendar on the wall. Every day he sat down to write, he would make a big red X over that day.

“After a few days you’ll have a chain. Just keep at it and the chain will grow longer every day. You’ll like seeing that chain, especially when you get a few weeks under your belt. Your only job next is to not break the chain.”

I’ve used this system myself a few times and can testify that it works. There’s just something about seeing that chain of X’s on a calendar that both motivates you to keep going and makes you scared to break it.

A few sites on the web have popped up that have created online tracking systems like Seinfeld’s. Dontbreakthechain.com and Joe’s Goals both allow you to track your habit-forming progress online. Best of all, they’re free. Sign up with an account today and start tracking.

5. Keep yourself accountable. Even more motivating than a calendar full of X’s is an accountability partner. It’s easy to fall off the wagon when no one will ever find out about our failures. An accountability partner is someone who can ask how you’re doing and demand honesty. And the thought of having to tell them about your slip up can motivate you to stay on track. Accountability partners can take many forms; you can ask a friend or mentor to check in on you daily or weekly, you can make a pledge on your blog (provided people read it!) and provide regular updates on your progress, you can make a bet with your friends, or you could start a group in the Community to work on the habit with other men. If you’re trying to quit the porn, check out this site to download software that will send a weekly report on all the websites you visit to whomever you choose.

6. Replace a bad habit with a good habit. In my experience, it seems the only way to kill a bad habit is to replace it with a good one. Nature abhors a vacuum; if you create a hole in your life and don’t actively fill it with something good, it’s going to follow the path of least resistance and fill with whatever is most handy-yup, your old bad habit.

For example, for a few years now I’ve been trying to kick a Diet Mountain Dew habit that started while I was an undergrad and only intensified during law school. I want to stop the habit because a) aspartame sort of freaks me out and b) I could spend $5 on something better than a 12 pack of soda.

Every time I would resolve to stop drinking the stuff, I’d do alright for a week or two, only to eventually end up at QuikTrip with my mouth over the Dew dispenser.

Looking back at all my failures, I can see I went wrong by never replacing the Diet Mountain Dew habit with a better one. So, I end up returning to it, like a dog to its neon yellow vomit. This time around I’ve decided to drink a cup of yerba mate or a big glass of water when I get the urge to pop a can of Dew.

Your habits, both bad and good, create deep neural pathways in your brain. Think of it like hacking through a forest-the first time is rough because you’re blazing a new trail, the second time is much easier, and then it gets easier and easier on each successive trip as you turn the pathway into a well-worn trail. Your brain wants to follow these pre-blazed paths because they’re already laid out. This is why habits are so hard to break.

You can’t just erase the pathways. Instead, you must start hacking a path that runs parallel to and bypasses the old trail. It will be tough going at first, but eventually the good habit will become the clear, go-to path, while the old habit path becomes overgrown with vegetation from disuse.

7. Just do it, dammit! It doesn’t matter how inspired or motivated we are, if we don’t take advantage of every opportunity to act on those sentiments, our goal of forming a habit will end in failure. The key to success is consistent action. Personally, my biggest challenge is getting stuck in the “strong initiative” phase. Everybody loves the idea of turning over a new leaf; it’s easy to get excited about getting a fresh start and changing your life. Purging the house of junk, buying a new planner or self-help book is fun.

It’s when two weeks have gone by and the excitement wears off that the men are separated from the boys. The realization sinks in that forming this habit is going to take unglamorous work every damn day, that like straight razor shaving, you have to sharpen and hone your razor over and over.  It becomes a test of endurance. The key is not to give up what you ultimately want, for what you feel in the moment. Don’t let your brain tell you that you current discomfort will last indefinitely. It won’t. Eventually you’ll have carved out that new pathway, things will become easier, almost automatic, and you’ll see how good it feels to get literally in the groove.

So, let’s quit the navel gazing, roll up our sleeves, and get to work on forging habits that will turn us into the men we want to be!

Listen to our podcast that delves into the science of making and breaking habits: