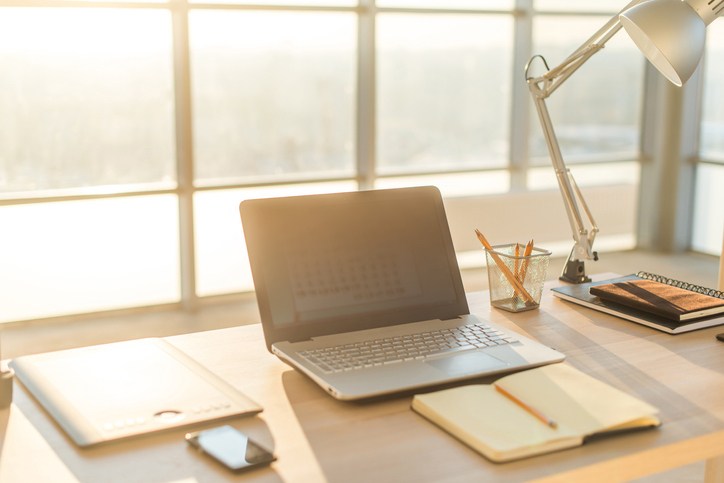 Editor’s note: The following excerpt was taken from the chapter “How to Make Habit Your Friend,” included in The Technique of Getting Things Done (1947) by Donald Laird.

“A place for everything, and everything in its place,” is one of the simplest ways of putting habit to work for you to get things done. Consistency is the password.

The watch repairman always sets his tools in the same location; he does not waste time removing the magnifying lens from his eye to hunt for the one he needs next. He works, rather than plays hide-and-seek with his equipment.

The executive’s desk shows that he makes habit work for him. Everything on it has a place. He can reach for pen, paper clips, red pencil, rubber stamp, without taking his eyes from his work. He does not need to hunt for things, does the little jobs automatically, without thought. He is not distracted from the big jobs, because habit is on his side of the game.

Such organization for work is the simplest and perhaps the basic habit in getting more things done with less effort. It is ideal for the lazy person who hates to be annoyed by details.

It may be because I qualify as a lazy person, or it may be because I have to be away from home headquarters much of the year, but, whichever the reason, I have learned firsthand the work-facilitating value of keeping organized for work. I [carry my office] scattered about my person.

Paper clips and rubber bands I put always in the ticket pocket of my coat. Pencils and memo pad, as well as memos, are set in my left vest or shirt pocket. Extra eyeglasses are in my right vest pocket. Railroad tickets and hotel reservations I place in a special pocket I have tailored in the left side of my coats. Hotel keys go in my right coat pocket, cleansing tissues in the left, lecture notes and details in the inside right pocket, along with post cards for taking care of correspondence. A penknife for clipping newspapers and magazines hangs at the other end of my watch chain.

I work on train, bus, or plane by the hour without ever having to hunt for a thing. Habit instantly produces whatever I need, and habit puts it back in its proper place as soon as I am finished with it. Other passengers may think I am scratching fleas as I reach for and return things to the various sectors of my anatomy.

But I don’t mind, because I am getting work done, and done the lazy way by using habits of organization.

According to reports, one high government official, who must remain nameless, will not recommend a man for public office until he has the opportunity to ask him for a match. If the prospective appointee fumbles through his pockets to locate it, he is not appointed. The official believes that a man with good work habits will always know where his matches are kept. Those who pass the match test presumably have the habit of organizing little things so they can save time and thought for bigger ones.

But one can be systematic in little things and still fail over big work habits. One may have the habit of letting things go or the habit of getting them done.

Many of the world’s producers have spurred themselves on to the habit of getting things done by using certain places for work and for nothing but work.

William Gladstone, a wealthy Scotchman, ran England off and on for many years. Early in life Gladstone discovered he could produce best when he used a workplace that was habitually associated with the kind of work he wished to do at the time. So he had two desks. One was for business affairs alone. The other, in the same red-and-white room, was for his literary work.

Ex-nurse Mary Roberts Rinehart combined a career with raising a family. She rented an office in downtown Pittsburgh where she could write without family distractions and home associations. That city office meant work and nothing but work to her. At home she concentrated on something different, enjoying her family life. Work attitudes did not handicap her at home or home attitudes check the flow of her thoughts when at work. Years later, after she had completed more than three-dozen books, she tapered off from writing and gave up the city office. But in her home she still used two desks, one for social writing and another, in a different room, for her occasional literary work.

Jane Austen, the English novelist, always used the same little mahogany table for her work. When she was not engaged in writing, the little table was put out of sight and not used for anything else. That table was one of her work habits and always suggested work to her when it was in the room.

“Over the Hill to the Poorhouse” was written by Will Carleton, a poet who kept far, far away from the poorhouse himself. This Michigan-born man made more money from poetry than most Wall Street brokers out of business. The public liked his folksy rhymes of rural life, and broad-shouldered Carleton, who looked more like a banker than a poet, made such a success of both producing and collecting for his poetry that he earned a small fortune.

His workroom was in his brownstone home on Greene Avenue, Brooklyn. “I shut myself in here,” he used to say. “At this window is my business desk. At this other window is my composing desk. No papers are ever allowed to stray from one desk to the other.”

Robert Southey, whose father ran a small linen shop, became Poet Laureate before he was thirty. He had the habit of scheduling the hours and minutes of each day. And he kept himself hard at it by having different desks for different jobs. When he became tired at one desk, instead of stopping production to rest he merely moved on to another desk and took up another task. He put in a long workday but was still full of zest and vigor when evening fell.