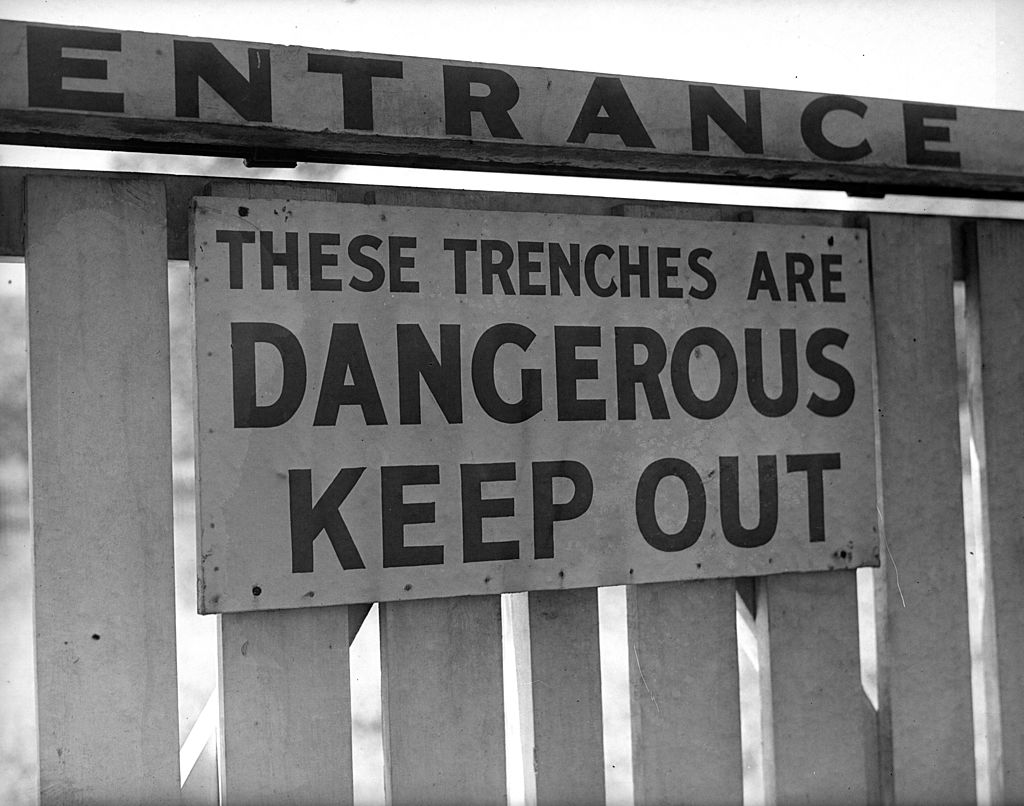 “The Greatest Danger in the World”
From Climbing Manward, 1924
By Frank H. Cheley

Every moment that we live we are in danger from something: fires, floods, earthquakes, lightning, automobiles, trolley cars, frightened horses, and airships. Every newspaper in the land is full each day of the human tragedies that result from the dangers that everywhere surround us. Folks are electrocuted by live wires, struck down by automobiles and falling material from buildings, crushed in elevators, injured by stumbling on slippery steps, poisoned from bad food, caught in railroad wrecks, and in a hundred other ways are made to suffer. It is dangerous even to be alive, and yet how few folks there are that are really aware after all of their greatest danger.

It was a Detroit boy that cleverly summed the situation up for us in a recent Safety First Contest held in that city. A prize was offered to the scholar who should name the greatest ordinary danger that might befall the people of Detroit. Bank Presidents, Captains of Industry, the Chairman of the Board of Public Safety, and other notables were to be the judges. Of course, thousands of answers were submitted. But this one wide-awake boy, who used his head as well as his eyes in summing up dangerous situations, hit upon the prize-winning answer.

Like most wonderful things, the boy’s answer was so simple, so absolutely obvious that as soon as it was printed in the papers a thousand other contestants at once exclaimed, “Oh, why didn’t I say that. I knew it all the time.” Business men smiled. Preachers nodded their heads approvingly. The general public laughed. It was so ridiculously simple and yet it was one of the sublime truths that each of us needs to learn so thoroughly that we shall never be able to forget it.

“The greatest danger that may befall any of the people in Detroit, or anywhere else for that matter,” said this live, wide-awake boy, “is to fall into a rut.” And he was absolutely right, for after all, comparatively few people get run over or struck dead or killed in wrecks, but every day all over the big, busy world numberless people are allowing themselves to fall into one kind of rut or another, and the great pity of it is few of them ever get out.

This falling into a rut is a tremendously serious business, for “a rut is nothing more nor less that just a grave with the ends kicked out,” so that such unfortunate folks have really just allowed themselves to be buried alive.

Some folks think that if you just keep moving, you are bound to succeed, but this is a great mistake. The proverbial frog in the well kept moving, but you know what happened to him. I know a boy that has made hundreds of trips a day for years from the main floor of a skyscraper to the tower, but he hasn’t had a raise in salary or a promotion in all that time. He’s in a rut. True, it is an up-and-down one, but a rut just the same, going through the same motions in the same place day in and day out, all because it is the easy thing to do. Sits down to his work; never has to think much; never has to learn anything new; operates a lever and opens and shuts the doors – then, of course, eats and sleeps between times. Buried alive and doesn’t know it!

He is satisfied with himself and his job and as a result he’ll never be anything but a common garden variety of elevator boy. Undoubtedly it would be too much trouble to make the necessary struggle to get out, such as regular hours of study and reading, or perhaps school. Is it too big a price to pay?

I know a sick boy; thin, emaciated, colorless. His folks worry about him and spend hard-earned money upon him, but it is of no use. He is in a rut. He is too lazy to exercise. It is too much trouble to play vigorously. He never has had to do any manual labor. He has just sat around and read stories, and read stories, and taken all his exercise in his mind until he is in a physical rut. Now all the skilled physicians of a great city can’t lift him out.

A certain football coach that had turned out a winning team for five years was suddenly overwhelmed by a raw team from a small town, whose only coaching had come from an older boy who was a student of the rule book. The papers couldn’t understand it, but when the same raw team beat two more leading colleges, the answer was discovered. Those college coaches had fallen into a rut. Winning had gotten too easy. They didn’t have to prepare new plays or train vigorously to win. Accordingly, they slid into a rut. A young chap with half their experience, but who used his head and was up-and-doing, beat them easily.

A great manufacturing concern that had practically controlled a certain product, suddenly awakened to find that a new, small, young competitor had stolen their business. The president snorted and raved at the audacity of anyone who thought he could make that certain commodity as well as he himself could, but when he investigated he found to his surprise that a young chap from his very own factory, who had gotten thoroughly disgusted with the shiftless methods and old-fashioned machinery used in the plant, had offered to supply the brains for a new concern if another gentleman would furnish the necessary capital. From the very first day, the venture was a success. There is never much competition when one party is deep in a rut.

Now, being in a rut and being a failure are about one and the same thing. A successful man is rarely found in a rut. Constant energy and alertness and enthusiasm are the safety devices that save boys from ruts. Avoid falling into a rut in your thinking, in your conduct, in your reading, in your eating, in your pleasures, in your friendships, in your pastimes. Procrastination and downright laziness are responsible for more folks being in ruts than anything else. Mr. Walter Pulitzer’s advice in the New York Herald is excellent at this point:

“My friend, have you heard of the town of Yawn,
On the banks of the River Slow,
Where blooms the Waitawhile flower fair
And the Some-time-or-other scents the air
And the soft Go-easys grow?

It lies in the Valley of What’s-the-use,
In the province of Let-her-slide;
That old ‘tired feeling’ is native there –
It’s the home of the listless I-don’t-care,
Where the Put-it-offs abide.”

How much better to go with Kipling’s explorer even on a long and perilous journey. True, the old prospector might have stayed with the gang and dug with the gang and wasted days and nights with the gang. Yet he didn’t, but rather chose to follow the promptings of the mysterious whisper that was always striving to save him from the rut of being a common miner. So he responded, as the story goes, to the urgings of the whisper.

It is a wonderful thing to never be content but constantly seeking something better. Such folks rarely fall victim to a rut. Some one once said that “the whole world was in league to reduce living to the commonplace,” which is but another way of saying that the line of least resistance inevitably leads to ruts.

Therefore, if you would be big and useful and a joy to yourself and others, steer clear of the rut – it is the greatest danger in the world.

Dare to cut your own channel.

Dare to think your own thoughts.

Dare to act on your convictions.

Dare to lead, there will always be plenty of followers.

Eyes to the front; hand on the throttle; foot on the clutch –

Steer clear of the rut –

“Sad will be the day,” wrote Phillips Brooks, “for any youth when he becomes absolutely contented with the life he is living, with the thoughts he is thinking, and the deeds he is doing; when there is not forever beating at the door of his soul some great desire to do something larger which he knows he was meant and made to do.”