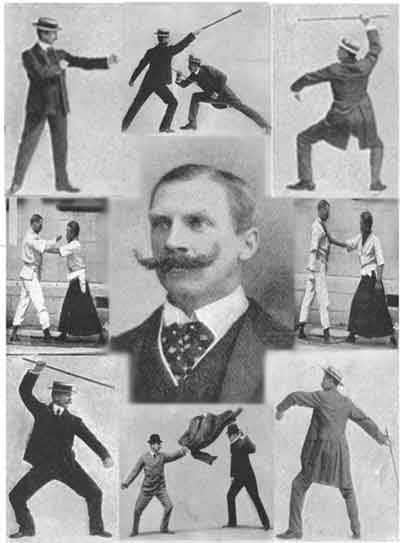 Before Randy Couture and the Ultimate Fighting Championship, there was Edward William Barton-Wright and bartitsu. Bartitsu was probably the first instance of what we know today as mixed martial arts. Mr. Barton combined elements of boxing, jujitsu, cane fighting, and french kick boxing in order to create a self defense system that could be used by discerning gentlemen on the mean streets of Edwardian London. It grew to such popularity that even Sherlock Holmes was practicing bartitsu in his mysterious adventures.

While bartitsu died in the early 20th Century, E.W. Barton left a legacy in the field of martial arts. What follows is a brief history of bartitsu as well as a guide to get you started on learning the martial art of gentlemen.

The History of Bartitsu 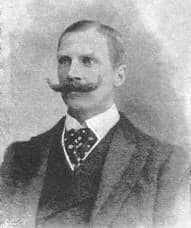 When unarmed, William Barton-Wright would use his mustache as a weapon.

Bartitsu was created by William Barton-Wright, an English railroad engineer. Barton’s work as an engineer took him to Japan for three years where he was introduced to jujitsu. He studied the art at the school of Jigoro Kano. Barton must have been excited about what he learned. When he returned to England, he quit his career in engineering and opened up a martial arts school where he taught jujitsu.

In 1899, Barton wrote an article in the London based publication, Pearson’s Magazine, entitled “A New Art of Self Defense.” In it he set out his system of self defense that he called “bartitsu,” an obvious melding of his name and jujitsu. While bartitsu was based mainly on jujitsu, Barton explained in his article that the system included boxing, kickboxing, and stick fighting.

Barton opened a school called the Bartitsu Club. He brought in some of the best martial arts teachers from around the world to teach at his new school. Among these were Japanese instructors K. Tani, S. Yamamoto, and Yukio Tani as well as Pierre Vigny and Armand Cherpillod. One journalist described the Bartitsu Club as “… a huge subterranean hall, all glittering, white-tiled walls, and electric light, with ‘champions’ prowling around it like tigers.”

Bartitsu declined in popularity as rapidly as it had ascended. By 1903, the Bartitsu Club closed and most of its instructors established their own self defense schools in London. Barton continued to develop and teach bartitsu until the 1920s. Because of the lack of interest in his martial art, Barton spent the rest of his career as a physical therapist. He died in 1951 at the age of 90.

A Mini Documentary on Bartitsu:

The Martial Arts of Bartitsu

Bartitsu was a mix of several marital arts. Here are several of them, along with a list of resources from Barton’s time for those gents who wish to delve deeper into each.

The boxing style implemented by Barton was the style used by Golden Age fisticuffers of the time. Unlike the modern style, boxers during the 19th and early 20th century maintained a stiff and upright stance. Usually the lead hand was extended, with the rear forearm “barring the mark” or covering their chest area. 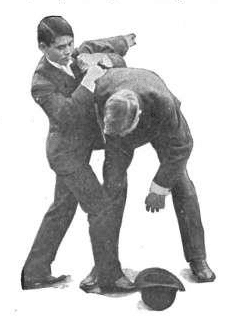 It’s obvious bartitsu borrowed its name from the Japanese fighting style of jujitsu. During the late 19th century, jujitsu had become a popular sport among Westerners. In fact, President Teddy Roosevelt was a practitioner of the martial art. Barton brought in famous Japanese jujitsu instructors or jujtsukas K. Tani, S. Yamamonto, and Yukio Tani. In an March 1899 issue of Pearson’s Magazine, Barton summarized jujitsu in three principles:

1. To disturb the equilibrium of your assailant.
2. To surprise him before he has time to regain his balance and use his strength.
3. If necessary to subject the joints of any parts of his body, whether neck, shoulder, elbow, wrist, back, knee, ankle, etc. to strains that they are anatomically and mechanically unable to resist. 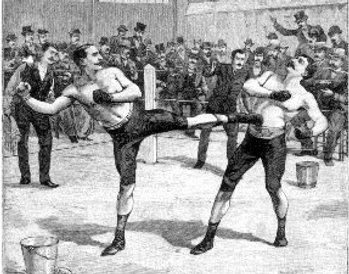 La savate (pronounced savat) is a French kickboxing system developed from street fighting sailors in the port of Marseilles during the 19th century. Sailors in Marseilles had to develop a way to fight that didn’t involve closed fists because they were considered deadly weapons and carried legal penalties if used. Thus, savate consisted of different kicks, open handed slaps, and grappling.

Also known as “la canne,” stick fighting was another French martial art. Barton brought in Pierre Vigny, a Swiss master-at-arms, to teach stick fighting. Because many upper class Englishman carried canes and umbrellas, Vigny modified the traditional form of stick fighting to better implement these instruments. His system was simple and efficient, and it lent itself to defending oneself in an altercation in the streets. Strikes to the face, head, neck, wrists, knees, and shins were used to eliminate the threat of an attacker.

Barton also included some creative and effective self defense techniques that used improvised weapons and surprises. For example, in his article in Pearson’s Magazine, Barton described using one’s coat or hat as way to distract an assailant.

Using a cloak or overcoat to defend yourself

Using your cloak or overcoat is an effective defensive tool, even when an attacker is brandishing a knife. While walking in the street, wear your overcoat draped over your shoulders without passing your arms through the sleeves. In your assailant attacks, take your right hand and grab the left collar of your coat and, in one sweeping motion, shroud your opponents head with the coat. Your attacker will be surprised and momentarily blind, which gives you plenty of time to punch him in the gut or give him several licks to the head.

You can also choose to slip behind your opponent while you have the coat over his head, grab his ankle with your left hand, and simultaneously push his back so that he falls forward on his face. From here you can put your opponent in an appropriate jujitsu hold until the police come.

Using a hat to defend yourself. A hat can also be used to distract or temporarily blind an attacker. When an attacker gets near you, take off your hat with a sweeping motion, and burrow your opponents face into it. Either make a blow to his stomach or take him down to the ground to put him in a submission hold.

A hat can also be used as a shield to defend yourself from punches or attacks from knives. Holding the hat firmly by the brim in your left hand, hold the hat away from your body to the side. If an attacker makes a thrust at you with a knife, catch the blow with your hat and make a blow to the attackers face with your free hand. 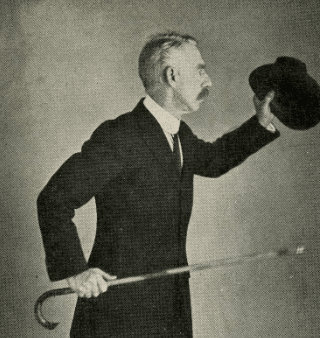 As mentioned, Bartitsu is a mix of several martial arts. What follows is a brief explanation on how to perform a few useful moves from these martial arts.

The jab. The jab can be performed with either the point or the butt of the cane. Using the point is more effective and will cause greater amounts of pain. Perform the jab by quickly stabbing your opponent and retracting your hand quickly. The quickness of the jab makes it a difficult move to defend. 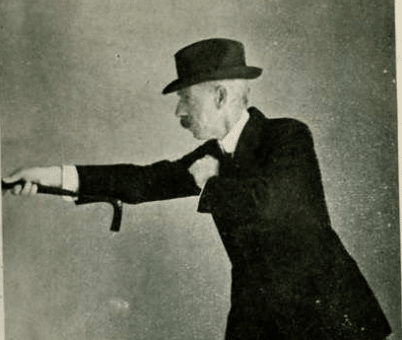 The thrust. The thrust is similar to the jab in that you use a stabbing motion. It differs from the jab because it’s delivered over a longer distance and requires full extension of the arm. Standing in an attack position, quickly lunge forward, and extend the tip of the cane towards your attacker. For added oomph, put as much of your body weight behind the thrust as you can.

Cuts. Cuts can be performed either high or low, in up, down, right, or left directions. A cut is performed with a chopping motion. Downward cuts are probably the strongest motion and are also the most difficult to defend. 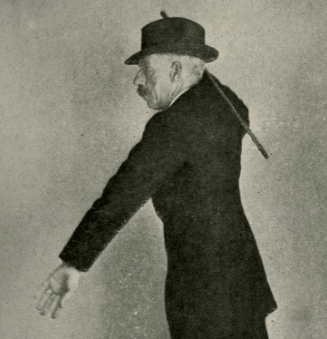 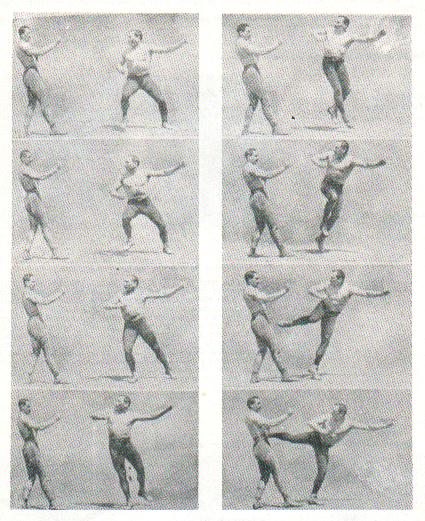 A chase lateral kick is performed crossing the rear foot behind the lead and then lifting the knee of the kicking foot towards the opposite shoulder. Add a hop before you strike. You can then strike with your foot aiming for the head, torso, or thighs of an opponent. 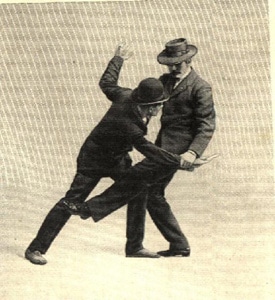 This is a sweeping kick aimed at the lower legs of an opponent. The kick is performed by pivoting the kicking foot from the hip. Your leg remains fully extended. You can either try to sweep an opponent off their feet or simply aim for their knees or ankles to inflict some pain.