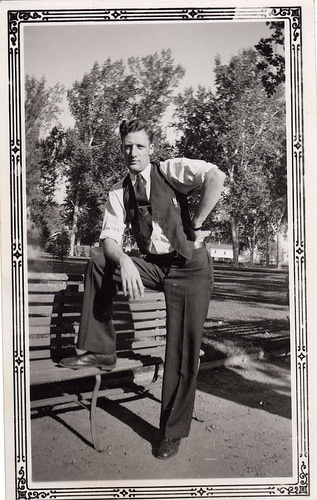 While we often think that the difficulty in defining manliness is a modern problem, if one looks through books of the the early 20th and 19th century, you will find that authors of that period also had a hard time nailing down exactly what manliness meant. Manliness is one of those things where you know it when you see it,but find difficult to put into words. Therefore, this essay by James Freeman Clarke is a delight; it is succinctly defines what manliness is and what manliness is not.

MANLINESS means perfect manhood, as womanliness implies perfect womanhood. Manliness is the character of a man as he ought to be, as he was meant to be. It expresses the qualities which go to make a perfect man, — truth, courage, conscience, freedom, energy, self-possession, self-control. But it does not exclude gentleness, tenderness, compassion, modesty. A man is not less manly, but more so, because he is gentle. In fact, our word ” gentleman ” shows that a typical man must also be a gentle man.

By manly qualities the world is carried forward. The manly spirit shows itself in enterprise, the love of meeting difficulties and overcoming them, — the resolution which will not yield, which patiently perseveres, and does not admit the possibility of defeat. It enjoys hard toil, rejoices in stern labor, is ready to make sacrifices, to suffer and bear disaster patiently. It is generous, giving itself to a good cause not its own ; it is public-spirited, devoting itself to the general good with no expectation of reward. It is ready to defend unpopular truth, to stand by those who are wronged, to uphold the weak. Having resolved, it does not go back, but holds on, through good report and evil, sure that the right must win at last. And so it causes truth to prevail, and keeps up the standard of a noble purpose in the world.

But as most good things have their counterfeits, so there is false manliness which imitates these great qualities, though at heart it is without them. Instead of strength of will, it is only willful; in place of courage, it has audacity. True manliness does what it believes right; false manliness, does what it chooses to do. Freedom, to one, means following his own convictions of truth; to the other it means thinking as he pleases, and doing as he likes. The one is reverent, the other rude; one is courteous, the other overbearing ; one is brave, the other foolhardy; one is modest, the other self-asserting. False manliness is cynical, contemptuous, and tyrannical to inferiors. The true man has respect for all men, is tender to the sufferer, is modest and kind. The good type uses its strength to maintain good customs, to improve the social condition, to defend order. The other imagines it to be manly to defy law, to be independent of the opinions of the wise, to sneer at moral obligation, to consider itself superior to the established principles of mankind.

All boys wish to be manly; but they often try to become so by copying the vices of men rather than their virtues. They see men drinking, smoking, swearing; so these poor little fellows sedulously imitate such bad habits, thinking they are making themselves more like men. They mistake rudeness for strength, disrespect to parents for independence. They read wretched stories about boy brigands and boy detectives, and fancy themselves heroes when they break the laws, and become troublesome and mischievous. Out of such false influences the criminal classes are recruited. Many a little boy who only wishes to be manly, becomes corrupted and debased by the bad examples around him and the bad literature which he reads. The cure for this is to give him good books that show him truly noble examples from life and history, and make him understand how infinitely above this mock-manliness is the true courage which ennobles human nature.

In a recent awful disaster, amid the blackness and darkness and tempest, the implacable sea and the pitiless storm, — when men’s hearts were failing them from terror, and women and children had no support but faith in a Divine Providence and a coming immortality, — the dreadful scene was illuminated by the courage and manly devotion of those who risked their own lives to save the lives of others. Such heroism is like a sunbeam breaking through the tempest. It shows us the real worth there is in man.

No matter how selfish mankind may seem, whenever hours like these come, which try men’s souls, they show that the age of chivalry has not gone; that though

” The knights are dust, and their good swords rust,”

there are as high-hearted heroes now as ever. Firemen rush into a flaming house to save women and children. Sailors take their lives in their hands to rescue their fellow-men from a wreck. They save them at this great risk, not because they are friends or relatives, but because they are fellow-men.

Courage is an element of manliness. It is more than readiness to encounter danger and death, for we are not often called to meet such perils. It is every-day courage which is most needed,—that which shrinks from no duty because it is difficult; which makes one ready to say what he believes, when his opinions are unpopular; which does not allow him to postpone a duty, but makes him ready to encounter it at once; a courage which is not afraid of ridicule when one believes himself right; which is not the slave of custom, the fool of fashion. Such courage as this, in man or woman or child, is true manliness. It is infinitely becoming in all persons. It does not seek display, it is often the courage of silence no less than speech; it is modest courage, unpretending though resolute. It holds fast to its convictions and principles, whether men hear or whether they forbear.

Truthfulness is another element of true manliness.

Lies usually come from cowardice, because men are afraid of standing by their flag, because they shrink from opposition, or because they are conscious of something wrong which they cannot defend, and so conceal. Secret faults, secret purposes, habits of conduct of which we are ashamed, lead to falsehood, and falsehood is cowardice. And thus the sinner is almost necessarily a coward. He shrinks from the light; he hides himself in darkness. Therefore if we wish to be manly, we must not do anything of which we are ashamed. He who lives by firm principles of truth and right, who deceives no one, injures no one, who therefore has nothing to hide, he alone is manly. The bad man may be audacious, but he has no true courage. His manliness is only a pretence, an empty shell, a bold demeanor, with no real firmness behind it.

True manliness is humane. It says, “We who are strong ought to bear the infirmities of the weak.” Its work is to protect those who cannot defend themselves; to stand between the tyrant and the slave, the oppressor and his victim. It is identical in all times with the spirit of chivalry which led the good knights to wander in search of robbers, giants, and tyrannical lords, those who oppressed the poor and robbed helpless women and orphans of their rights. There are no tyrant barons now, but the spirit of tyranny and cruelty is still to be found. The good knight to-day is he who provides help for the blind, the deaf and dumb,the insane; who defends animals from being cruelly treated, rescues little children from bad usage, and seeks to give working men and women their rights. He protects all these sufferers from that false manliness which is brutal and tyrannical to the weak, abusing its power over women and children and domestic animals. The true knights to-day are those who organize and carry on the societies to prevent cruelty, or to enforce the laws against those who for a little gain make men drunkards. The giants and dragons to-day are those cruelties and brutalities which use their power to ill-treat those who are at their mercy.

True manliness is tender and loving; false manliness, cold and hard, cynical and contemptuous. The bravest and most heroic souls are usually the most loving. Garibaldi, Kossuth, Mazzini, the heroes of our times; Luther, who never feared the face of man; Gustavus -Adolphus and William of Orange, are examples of this union of courage and tenderness. Bold as lions in the defense of the right, such men in their homes and their private life have a womanly gentleness. False manliness is unfeeling, with no kindly sympathies, rude and rough and overbearing. True manliness is temperate; it is moderate, it exercises self-control, it is capable of self-denial and renunciation. False manliness is self-willed and self-indulgent…….

True manliness differs also from the false in its attitude to woman. Its knightly feeling makes it wish to defend her rights, to maintain her claims, to be her protector and advocate. False manliness wishes to show its superiority by treating women as inferiors. It flatters them, but it does not respect them. It fears their competition on equal levels, and wishes to keep them confined, not within walls, as in the Mohammedan regions, but behind the more subtle barriers of opinion, prejudice, and supposed feminine aptitudes. True manliness holds out the hand to woman, and says, ” Do whatever you are able to do; whatever God meant you to do. Neither you nor I can tell what that is till all artificial barriers are removed, and you have full opportunity to try.” Manly strength respects womanly purity, sympathy, and grace of heart. And this is the real chivalry of the present hour.