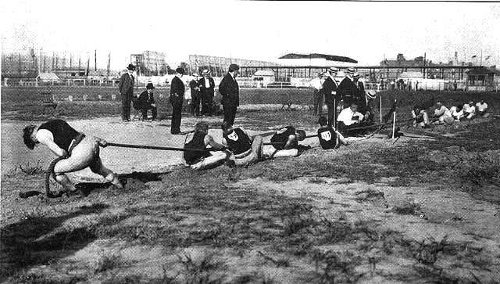 What are your regrets from last year?

Failing to stick with an exercise program?

Losing a girlfriend because you strayed?

Hurting a loved one with your temper?

What resolutions have you made for the new year?

Getting up earlier in the morning?

Reining in your spending?

Regrets and resolutions. What do they have in common? Willpower. A lack of and a need for.

But what is willpower anyway? You’ve heard the term before, but it probably seems like an awfully abstract force. You might feel as those it’s something innate, and that some men were born with a larger portion of it than others. It’s something you likely wish you had more of yourself, but don’t have any idea of how to go about it.

Happily, the truth is that willpower is a very real energy–a power source that can be depleted, strengthened, and conserved. And the man who learns how to tap into this fuel and harness his willpower gains some of the most vital knowledge one can possess: how to make of himself and his life anything he wants them to be.

The History of Willpower

“Self-control is self-mastery. It is kingship over all life. At the center of your being sits yourself. Your seat ought to be a throne. If you are not in control, if there are any forces in your nature that are unruly, that do not acknowledge your sway, you are not the king you should be. Part of your kingdom is in insurrection. The strength of your life is divided. The strong man is he whose whole being is subject to him.” -James Russell Miller, The Beauty of Self-Control, 1911

Like many great truths, the nature and importance of willpower was understood by our forbearers, lost in time, and then rediscovered and refined by modern science.

A focus on willpower originated in the 19th century, around the time of the Industrial Revolution. As people observed the way in which steam could be harnessed and turned into productive energy, their thoughts turned to contemplating the great feats the human machine might be capable of by channeling a different kind of fuel source: willpower.  In a time when a successful life was measured by the pursuit of character and virtue, a man’s “strength of will” or “moral resistance” was seen as the most vital quality for achieving those ends. Regardless of the temptations he was beset with, a man of iron-clad self-control never veered from his purpose and code of honor.  As the captain of his fate, he steered his own course, come what may. No accomplishment in position or wealth could be measured next to the greatest conquest of all…mastery of one’s self.

This celebration of willpower was weakened by the Progressive movement of the early 20th century, which focused on people’s external environment as opposed to their personal qualities as determining their fate. Poverty and crime could be traced to a person’s deficient upbringing and squalid surroundings, progressives argued, not their lack of self-control.

During World War II the term picked up some negative baggage from the release of the Nazi propaganda film, Triumph of the Will. And in post-war America, willpower was relegated to the background by the rising consumer culture—after all, self-control is bad for business. The hippies of the 1960s heralded the maxim of “if it feels good, do it” as a guiding principle for life. And the philosophy of self-help gurus like Norman Vincent Peale and Napoleon Hill, who emphasized positive thinking as the way to success, remained popular throughout the 20th century.

In the present time, this year has seen the release of a bevy of books that question how much free will and agency we really have after all. Psychologists and philosophers point to research and studies to argue that humans are highly irrational beings whose behaviors are largely controlled by their unconscious minds.

Yet at the same time, other psychologists have been launching a revival of interest in the concept of willpower and demonstrating in studies that not only does it constitute a real and enormously vital energy, but that one’s belief in it need not involve invariably blaming the victim for their misfortunes (an understanding of willpower can illuminate just how external factors effect the downtrodden), nor put you in the ranks of the cruel goose stepper (having strong self-control is linked to greater levels of empathy and altruism, not less).

The Importance of Willpower

“That majestic endowment [the Will] constitutes the high privilege granted to each man apparently to test how much the man will make of himself. It is clothed with powers which will enable him to obtain the greatest of all possessions — self-possession. Self-possession implies the capacity for self-restraint, self-compulsion and self-direction; and he who has these, if he live long enough, can have any other possession that he wants.” –William Hanna Thompson, Brain and Personality, 1906

Psychologists have always been keen to find the personal characteristics that correlate to positive life outcomes. While they’ve turned over hundreds of rocks in this search, they’ve only found two factors that consistently lead people to greater levels of happiness, health, and success: willpower and intelligence.

Unfortunately, researchers have yet to discover ways of increasing a person’s intelligence in the long-term; it is an aptitude that is largely genetic and innate.

So when it comes to bettering our lives, that leaves willpower as the only tool within our control.

But what a powerful tool it is.

By now you’ve probably heard about the oft-cited marshmallow experiment in which four-year-old children were left alone in a room with a marshmallow in front of them. The children were told they could eat the marshmallow right away, or wait 15 minutes to receive an additional marshmallow. The children with the highest self-control, those who were able to wait in order to double their white gelatinous booty—grew up to become fitter adults who got better test scores and grades and enjoyed healthier relationships.

In another study which examined 36 different personality traits of a group of children, only one, willpower, later correlated to their college GPA. In fact the correlation between willpower and college GPA was stronger than that between future grades and IQ or SAT scores.

Other studies have shown that people with higher levels of self-control are more emotionally stable and struggle less with anger, anxiety, depression, and drug and alcohol abuse. They also make more popular bosses, have more friends, and are more likely to be in a stable marriage and less likely to get divorced. And all of these benefits hold true even when the results are controlled for things like class, race, and intelligence. The same outcomes were also found when siblings who were raised in the same household were studied. The siblings with more self-control fared better in life than their willpower-lacking brothers and sisters.

It is easy to see why such a high correlation between your level of willpower and how far you reach in life exists. All success, happiness, and satisfaction are achieved by minimizing your screw ups and maximizing your positive decisions and habits. And the energy that drives your ability to produce both outcomes is willpower. The man with more willpower takes five steps forward and one step back, while the man with less willpower takes two steps forward and then one step back. Thus, it is not an overstatement to describe willpower as the absolute linchpin quality in determining the outcome of your life—whether you’ll be superhuman or ordinary, king or slave, man or mouse.

“A better definition of the Will, therefore, is ‘the Power Of Self-direction.'”

“The Will may be now [defined] as a power to choose what the man shall do.”

-Frank Hadding Chaddock, The Power of Will, 1919

Okay, so the strength of your willpower is incredibly important. But to return to the question posed in the introduction…what exactly is willpower anyway?

Essentially, it is a mental energy that allows you to direct your actions in four categories of behavior:

While willpower regulates all these different categories of potential and actual actions, it’s the same supply of willpower that deals with all of them—you don’t have one willpower supply for emotions and one for performance control.

Basically, whenever you have a desire to do something that conflicts with your long-term goals and your core values, willpower is the thing that kicks in and tries to keep you on track. The stronger your willpower is, the better chance of making a decision in line with your goals. Willpower is what allows you to choose your path and to persevere in that path despite obstacles, resistance, and weakness.

While it’s true that our unconscious minds lead us to make choices and behave in ways we are not always aware of and that are not always rational, the sway of the unconscious is greater when it comes to our short-term decisions. Willpower acts as an executive force that looks for patterns and sees the connection between our present behavior and our long-term goals, and then makes course corrections to keep us heading in the right direction. Or in other words, willpower is the skipper of our ship; despite wind and waves that push the ship around, the skipper constantly consults his compass and adjusts the rudder so we stay on course.

I find it useful to imagine willpower in the context of the old image of the devil and the angel sitting on each of your shoulders, but sans the religious imagery. Instead of an angel, imagine Teddy Roosevelt on one side, and Al Bundy on the other. TR’s saying to you, “Bully! Read that textbook!” while Al is whispering in your ear to grab a beer and plop in front of the television. Who will win? Well that depends on TR’s strength relative to Al at any given moment. What determines that strength? A phenomenon called “ego depletion.”

And that’s what we’ll explore next week in the second part of this three part series, when we discuss the finite nature of our willpower supply. Then we’ll finish up with an article on how to strengthen, and even more importantly, how to conserve your willpower for the most important things in your life.