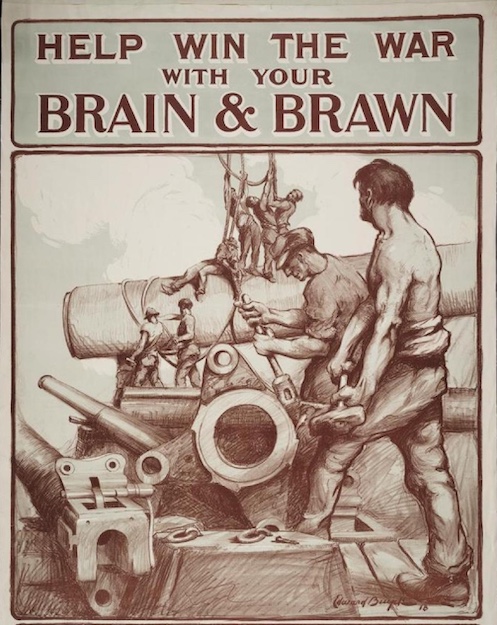 With our archives now 3,500+ articles deep, we’ve decided to republish a classic piece each Sunday to help our newer readers discover some of the best, evergreen gems from the past. This article was originally published in May 2012.

Many of the guys I’ve talked to (particularly the ones in their 20s and 30s) have confessed to me that they still feel like a teenage boy walking around in a grown man’s body. Because they don’t feel like mature men, many of these young men are putting off adult responsibilities like careers, families, and civic involvement until they can look at themselves in the mirror and say: “I’m a man.” In the meantime, these young men drift insecurely through life, wondering when they’ll finally start feeling like grown men.

We’ve talked a lot on the site about why young men today are struggling with the transition from boyhood to mature masculinity, including the lack of a rite of passage, positive male mentors, refining challenges, and simply an understanding of what manhood is and what it requires.

While all those things have certainly contributed to the enervated state of modern masculinity, I think an underlying problem is that young men today are simply following modern, conventional wisdom on how a person “becomes” who they want to be.

Conventional wisdom tells us that before we do something, we first need to feel like doing it or feel like the kind of person who would do that sort of thing. And in order to feel like doing something, the thinking goes, you need to get in the right mindset, “find yourself,” or discover your “deep inner truth.”

So young men following conventional wisdom drift through life waiting until they feel like a man before they take their place in the circle of men. They believe that at some magical moment in the future, they’ll feel like a grown man, and once that happens they’ll finally have the motivation to start doing manly things. Or they read books, meditate about masculinity, and attend weekend men’s retreats, hoping that they’ll start to feel like a man through pondering manhood. But they don’t seem to make much progress. Sure, they have their moments of inspiration, but when the retreat is over or the book is finished, they’re back to feeling insecure about their status as men.

But the problem with conventional wisdom on how a person “becomes” is that it doesn’t work. At least not very well. Nine times out of ten you won’t magically start feeling like a man by simply thinking about becoming a man. So how can you start feeling like the man you’ve always wanted to be? By following the advice given by both ancient philosophers and modern psychologists: to feel like a man, you have to act like a man.

Ancient and Modern Wisdom on Becoming

Several ancient cultures and religions taught the way to belief and personal identity was not through contemplation, but rather though action. They understood the power that our outward actions have on our inner psyche.

According to the Torah, when Moses stood atop Mount Sinai and presented his people the stone tablets with the Law of Jehovah inscribed upon them, the Hebrews spoke in unison “na’aseh v’nishma,” which means “We will do and we will understand.” Basically the Hebrews covenanted that they would live the Law first, in the hope that through living the law they would eventually come to understand it. Today, this statement represents a Jewish person’s commitment to live all the Law of Moses even if they don’t fully understand the reasons behind each commandment. Modern rabbis teach that na’aseh v’nishma is how one comes to understand God and His laws for man. By living the outward ordinances, a change happens within.

Writer A.J. Jacobs, who describes himself as a “Jew in the same sense that the Olive Garden is Italian food,” put the principle of na’aseh v’nishma to the test in his hilarious memoir, A Year of Living Biblically: One Man’s Humble Quest to Follow the Bible as Literally as Possible. Jacobs didn’t just try to live the Ten Commandments perfectly for a year, but also the over 600 obscure laws found throughout the Bible, like not shaving the corners of your beard, blowing a shofar before prayer, and not sitting where a menstruating woman has sat (that one got him in trouble with his wife).

Coming from a scientific and agnostic family, Jacobs saw many of the rituals and laws of his cultural heritage as strange and irrational. But after a year of trying to live according to the Bible, Jacobs felt his attitude shift about religious rituals and even the divine. While he didn’t convert from being a secular Jew into a full-on theist, Mr. Jacobs now considers himself a “reverent agnostic,” who believes “that whether or not there’s a God, there is such a thing as sacredness. Life is sacred.” Jacobs credits his attitude shift to living Biblical principles even when he wasn’t sure of the reason behind them; he acted first without understanding to become a more reverent person.

The Greek philosopher Aristotle taught something similar to na’aseh v’nishma in his Nicomachean Ethics. In the Nicomachean Ethics, Aristotle lays out his idea of the “Good Life” and how to obtain it. For Aristotle, the Good Life meant living a life of virtue. Unlike some Greek philosophers who believed that virtuous living came only from pondering upon the virtues, Aristotle believed that understanding wasn’t enough. To become virtuous, you had to act virtuous.

But the virtues we get by first exercising them, as also happens in the case of the arts as well. For the things we have to learn before we can do them, we learn by doing them, e.g., men become builders by building and lyreplayers by playing the lyre; so too we become just by doing just acts, temperate by doing temperate acts, brave by doing brave acts.

Virtues don’t come through simply thinking about them. You have to “exercise them.” Aristotle’s promise is this: if you want a virtue, act as if you already have it and then it will be yours. Change comes through action. Act first, then become.

The Patron Saint of Manliness, Teddy Roosevelt, also lived by this principle of acting in order to become. He said:

There were all kinds of things I was afraid of at first, ranging from grizzly bears to ‘mean’ horses and gun-fighters; but by acting as if I was not afraid I gradually ceased to be afraid.

Teddy wanted to be fearless even though he wasn’t. Instead of sitting around and thinking his way into courage, TR put himself into dangerous and uncomfortable situations and acted courageously. Eventually he became the man who led the charge up San Juan Hill and journeyed down an unexplored river in the Amazon. He took action in order to become the man he wanted to be.

Modern psychologists have a theory on why acting-to-become is such an effective way of changing who you are and how you feel about yourself: cognitive dissonance. When there’s a conflict between your self-perception and how you’re actually behaving, you experience dissonance or tension, and your brain moves to close the gap by shifting how you feel about yourself to match how you’re acting.

In her book, The Defining Decade: Why Your Twenties Matter and How to Make the Most of Them Now, adult developmental psychologist Meg Jay recounts an exchange she had with a 27-year-old male client named Sam who had been drifting along for most of his adult life while living in his parents’ basement:

‘I’m not sure you’re giving yourself much to feel like a man about,’ I offered.

Sam had it all backward. The way he saw it, he couldn’t join the world until he felt like a man, but he wasn’t going to feel like a man until he joined the world.

Dr. Jay goes on to share how Sam’s attitude about himself started to change once he began doing grown man things like starting a career, establishing a committed romantic relationship, and moving out of his parents’ basement and into his own place. Sam started to act like a man and consequently he began to feel like one. He gave himself something to feel like a man about.

Here’s the bottom line: If you don’t feel like a man, you simply need to start behaving like the man you want to become and eventually you’ll start feeling like you’re that man. Act as if. Fake it until you make it.  Your brain will eventually align your attitude/belief about yourself with your new behavior.

If you’re ready to start feeling like the man you’ve always wanted to be, today’s the day you begin that journey. Like any journey, it’s nice to have a map:

1. Figure out what sort of man you want to be. The above should not be misunderstood to mean that contemplating manliness is a waste of time. Thought and study are indeed essential in becoming an honorable man; it’s not enough to know you need to act, you also need to know what actions to take. What should you start doing? Where do you hope your actions will lead you? So begin at the end. What sort of man do you want to become? Maybe you have a personal hero or a grandfather or a mentor who personifies your ideal version of manhood. Once you know what kind of man you want to be, study and contemplate how that sort of man would live his life. What would he do when facing adversity?  What would his daily routine be like? How would he dress? How does he treat his significant other? Form a “cabinet of invisible counselors” to guide you on your journey.

2. Start doing the things that sort of man would do. Even if you don’t feel like it. Once you know what sort of things your ideal man would do, start doing them, and here’s the most important part, do them even if you don’t feel like it. Some of the stuff you’ll have to do will be hard, some it may make you feel uncomfortable, and some of it will make you feel like a phony. Ignore those feelings. That’s just the Resistance, as Steven Pressfield would say. Know that with time, your new manful actions will transform the way you feel about yourself. You will begin to see yourself as a man.

3. Virile agitur for the rest of your life. Even when you go through a rite of passage that really transforms you and puts you on the right path, you can’t rest on your laurels. Becoming a man is not a one-time decision or event: it’s something you have to choose every day. It’s like shaving; just because you do it once doesn’t mean you’re done; you still have to wake up and do it again in the morning. Virile agitur is a Latin phrase which means, “The manly thing is being done.” Is being done. Always and forever ongoing. Take that as your motto for manhood.