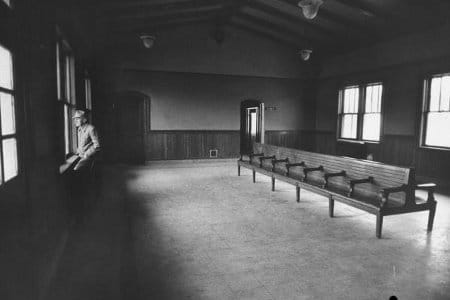 In the Art of Manliness Community, members often pose questions to the forum asking for advice. One question that pops up from time to time runs something like this: “I feel like I’ve lost passion for everything in life. Nothing seems to interest me and life feels empty.” Other members often respond that the person is likely clinically depressed and should go see a doctor.

Such advice is meant to be helpful and for some it probably is. But it also assumes that these kind of feelings always originate from the individual himself. Something is wrong with his mind that needs to be fixed with therapy or medication. But is this always the case? Or could that empty feeling be caused by much bigger cultural currents?

At the turn of the 20th century, French sociologist Emile Durkheim was interested in a similar question. While suicide is often thought of as the result of deeply personal problems, Durkheim wanted to investigate if the act was really influenced by larger cultural factors. He studied countries’ weather and religion and economy, looking for what might negatively or positively effect the suicide rate. What he concluded, in his seminal 1897 work, Suicide, was that the suicide rate was greatly impacted by the presence in society of something he called anomie.

Anomie, which literally means “without law” in German and French, was defined by Durkheim to be a state of “normlessness.” Durkheim posited that in times of social change and upheaval, clear societal standards and expectations for individuals vanish. Without “clear rules, norms, or standards of value” people feel anxious, rootless, confused, and even suicidal. Life in an age of anomie can often feel empty and meaningless.

Towards a Normless Soceity

As we’ve discussed previously, part of the reason we sometimes feel nostalgic for the “good old days” is that it was a time with clear expectations and shared cultural values, rules, and norms.

But people rightly felt chafed by such constraints; too many folks didn’t fit inside the tidy boxes. And so society threw off the old rules in favor of a world where personal freedom ruled supreme, a world where the only real rule was essentially “live and let live.”

But now we have neither social norms, nor anything left to rebel against.

What we have is an essentially “normless” society. There are still a few expectations that linger but “live and let live” generally reigns. You can get married at 20 or 40 or never, live with someone for decades and never get hitched, have 9 kids or none, or your first at age 60, wear what you want without anyone saying anything, date a woman from a different race, pierce any part of your body, walk down the street holding another man’s hand and not get roughed up, father a child out of wedlock and not be shunned by others, be a corporate warrior or a stay at home down or go back to college at 50. You can pretty much do whatever you want, short of breaking the law, and endure minimal social repercussions.

Certainly this unfettered personal freedom has its very positive aspects, allowing people to be whoever they wish. But in this blessing also lies the curse, when you can do anything and everything you want, how do you ever decide what it is you want to do and feel real satisfaction when you’re doing it?


Personal freedom without any constraints is a recipe for anxiousness, restlessness, and unhappiness. This isn’t some Puritan maxim-it is argued by sociologists and psychologists alike. Personal freedom without any guideposts, standards, or expectations is like being adrift in deep space. The weightlessness is initially exhilarating, but you lack any frame of reference for where you are-up and down, left and right are meaningless.

When we look back on men in the 1950s we sometimes think, “Those poor saps. Had little choice but to get married right away, have three kids, live in the burbs, and work at some corporate job for 50 years. How suffocating.”

But we have our own problems in our time. The men of the 50s might have been very constrained, but they also had clear indicators of whether they had attained success and happiness. They had a clear sense of where they stacked up in the game of life. Now success and happiness can mean a million things and no one is sure they have it. With so many choices, we are ever restless about which to pursue and if the avenue we’re taking is really the right one.

I have a friend who is endlessly lamenting that he wants his life “to be extraordinary.” But when I ask him what that means, he shakes his head, and says, “I don’t even know-it’s just this feeling that haunts me all the time.”

The Bucket List Generation Looks for the Meaning of Life

We are truly deeply social creatures. For hundreds of thousands of years of human history, people lived in tribes with their lives governed by the rules of the tribe and close social ties. Only very recently in the grand scale of things have we become tribes which consist of lone individuals and nuclear families, each micro-tribe living in its own isolated pod. (As a side note, people often talk about women being stay-at-home moms as the most natural thing, but there can hardly be anything more culturally unnatural than a woman, separated from family and friends, alone with her baby day after day).

As our own micro-tribe, we are charged with the task of creating our own rules, values, and expectations, our own personal meaning for the world. Yet it is often an unsatisfying task; it is like creating a personal language; it is uniquely ours, but we can’t use it to communicate with anyone else. Our personal creeds exist in a vacuum; without standards and social institutions to provide some structure, they have no context and thus no meaning.

Not feeling well a few weeks ago, I caught back to back episodes of a new show on MTV called “The Buried Life.” Now as far as “unscripted television” goes, this show is light years beyond most drivel that appears on the boob tube. Four telegenic 20-something lads decide to “break away from the normal track,” and drive a purple bus around the country, checking off various items on their “bucket list.” For every task they complete, they help a stranger do something they want to do before they die.

The show is warm and fuzzy and inspiring, but I couldn’t help but notice a couple of things. One is that when the guys ask other people what they want to do before they die, and they tend to ask lower-income, minority folks this question, these people come up with meaningful things like “Reunite with my son who I haven’t seen in 20 years” and “Visit my mother’s grave in another state.”

But the things the guys themselves, who are white, middle-class types who likely have lived pretty charmed lives, want to do before they die are a collection of fairly superficial tasks: “Give a toast at a stranger’s wedding.” “Throw a badass party.” “Crash the Playboy mansion.” “Ask Megan Fox on a date.”

Now I don’t have anything against bucket lists. In fact, we’ve encouraged men to come up with one. But seeing one played out on television made me realize how hungry guys in my generation and socio-economic bracket are to find meaning in their lives, and how hard it is to come up with meaningful avenues to do so. In a world without norms, a very comfortable world without the age old challenge of simply meeting one’s basic needs, we have been forced to invent checklists of random items in hopes they can guide us to a fuller life. But the challenges we pick for ourselves will never ultimately satisfy our need for a feeling of purpose or fulfillment. Challenges get their meaning from being tied to something greater than self-to God, home and family, or country. You can give a toast at a stranger’s wedding, feel the initial rush, but the satisfaction will not be lasting because the “accomplishment” doesn’t have any impact beyond the self.

I know this post seems rather pessimistic, but it’s not meant to be a doom and gloom hand wringing exercise, and it’s certainly not a nostalgic longing for the past. People can talk about a revival of traditional values til they’re blue in the face, but we’ll never see a return to strict societal norms. The cat is out of the bag, and people will not relinquish the personal freedoms we have gained to put it back in.

It’s simply something I’ve been thinking about lately. It’s not a problem where I can generate some bullet points on how to fix it. It’s something complicated we all need to think through. But it’s important to understand what you’re dealing with in life, and that if you sometimes get the sense that life feels awfully empty, that you know you’re not alone and that there’s a reason for it. It doesn’t mean we should give up. While society may never again have shared values, it doesn’t mean we cannot each strive for personal excellence. Or that our lives are destined to be meaningless. Every generation, every age has its own set of challenges. The challenge of ours will be to find true meaning and purpose in the age of anomie. How do you think a man can go about this task?