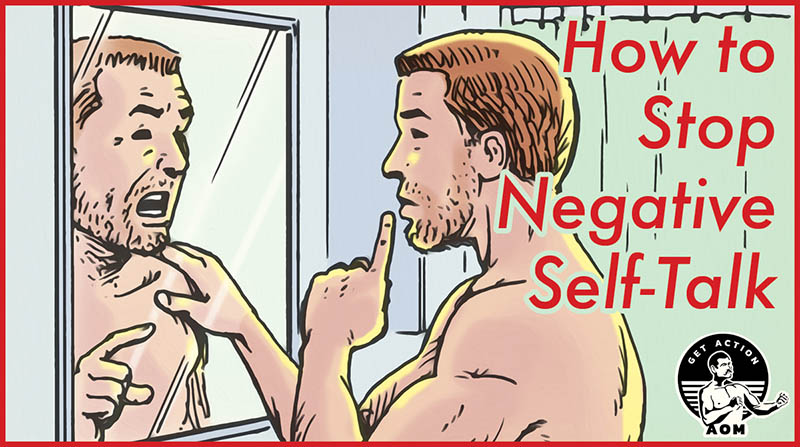 “No one will ever love me.”

The above are all examples of negative self-talk.

You might have said these kinds of things to yourself, or have your own flavor of condemnatory scripts that you use. Whatever your negative self-talk looks like, you know it’s not helping you move forward and make progress in your life. It’s also making you feel like crap.

But there is hope!

In my podcast with performance expert Dr. Don Greene, he laid out the super simple way to stop negative self-talk in its tracks. Below I walk you through it.

The Crippling Power of Negative Self-Talk

Before we get to how to improve your self-talk, let’s first discuss why the way you talk to yourself is so important in the first place.

While we’ve all got a conversation happening in our heads, it carries on so constantly that our minds have learned to ignore it for the most part. We might not be consciously aware of this internal voice, but it has a powerful influence on the way we view the world and how we decide to act.

You might think that berating yourself harshly helps you be motivated to do better — tough love and all that. But in fact, cognitively punching yourself in the face has precisely the opposite effect:

Negative self-talk makes you less resilient. When we engage in negative self-talk, we typically make personalized, permanent, and pervasive statements about ourselves. These types of statements are also called “Me/Always/Everything” statements, and they create a globalized indictment of our character; e.g., “I’m always messing everything up.”

Besides Me/Always/Everything statements, our negative self-talk tends towards catastrophization. We’ll take one little setback and mentally make a series of seemingly logical jumps that ultimately end up at an illogical conclusion. For example, if you fail a college class, your self-talk might go something like this:

Each jump is small and seemingly reasonable enough to keep the train of thought chugging, but together they end up taking you to a dark, and ridiculously implausible, place.

Me/Always/Everything thinking and catastrophic self-talk make you less resilient because you start to believe that your efforts are worthless and change isn’t possible. The result is a paralyzing feeling of helplessness and stagnant inaction.

The irony of negative self-talk is that in spending so much time focusing on your flaws, you never progress into actually addressing them.

Listen to our podcast with Ethan Kross about getting a handle on the voice in your head:

So negative self-talk makes you feel abysmal and prevents you from moving forward and making real improvements in your habits. Here’s then how to mitigate its impact and re-channel your mental dialogue in a more positive direction.

Step 1: Monitor Your Negative Self-Talk by Writing It Down

According to Dr. Greene, the first step in taming negative self-talk is writing down your negative thoughts. He calls this “thought monitoring.”

Our negative thoughts are reflexive and automatic. We’re often not aware that they’re even popping in our heads until we start feeling worked up and descend into a crappy mood. Writing these thoughts down makes the implicit, explicit. As Greene puts it in his book Fight Your Fear and Win:

The act of writing — of formulating thoughts into words, of nailing down vague notions with specific language — brings what was reflexive and out of your control into the purview of the conscious mind. Getting them into the light of day, getting them heard, immediately diminishes their horror and their power over you.

For the next two days, anytime you experience negative self-talk, use a pocket notebook or your phone’s note-taking app to write down exactly what you’re saying to yourself. Also, write down what happened immediately before the negative self-talk popped into your mind. This will help you find patterns in what triggers it.

You’ll likely feel weird, or like this exercise isn’t doing anything, which may tempt you to quit. Resist this urge. This an essential step in squashing the negative chatter happening in your mind. It helps you identify its triggers, and gives you a greater sense of control over your thoughts.

Besides, whatever you’ve been doing to silence your inner critic likely hasn’t worked. That’s why you’re reading this article. So what do you have to lose in taking part in this exercise for a couple days?

Step 2: Imagine Someone You Love and Care About and Ask Yourself, “Would I Say These Things To Them?”

After two days of capturing your negative self-talk in writing, you’ve likely created an extensive inventory of your inner Eeyore-isms and their accompanying triggers.

Congratulations. You’ve completed step one in stopping your negative self-talk.

According to Greene, step two requires imagining someone you love or deeply care about — it could be a spouse, a child, a friend, a parent, or even someone you mentor at school or work.

Got that person in your head?

Now, go down your list of negative self-talk statements and their accompanying triggers and ask yourself, “Would I say the same thing to this person I care about if they were going through a similar situation?”

Now imagine that your son just weighed himself on the scale, saw a number that wasn’t healthy, and felt dejected. Would you tell your son, “You’re such a fatty, and you’ll always be a fatso”?

Unless you’re a complete d-bag, the answer is no. You know saying that to him wouldn’t help and would only discourage him even more. You love and respect him too much to wound and demoralize him like that.

So why say that sort of thing to yourself?

The next time you mess up and feel the urge to spout a self-inflicting diatribe, imagine it was your child or friend who just did the exact same thing as you.

Recognize that you wouldn’t use the condemnatory language you typically gin up in your inner monologues with the person you’re imagining. Then decide you’re not going to use this kind of negative language with another person for whom you care either: yourself.

Self-compassion like this doesn’t make you soft; in fact, it’s been shown to boost your willpower — your grit.

The mental exercise outlined in steps one and two can go a long way in taming negative self-talk. But Greene argues that if you want to eliminate it entirely, you need to go one step further and swap the harmful self-talk scripts for positive ones.

Here’s how to create them:

Take a look at your list of negative self-talk scripts and their accompanying triggers.

Imagine the person you care about again and ask yourself, “What would I say to that person if they were going through the same situation that triggered my negative self-talk?”

You’d probably say something a lot more affirming and helpful than what you reflexively said to yourself.

Let’s go back to the fatso example. If your son wasn’t happy about his weight, you wouldn’t say, “Yeah, you’re a fatso, and you’ll always be a fatty.”

Instead, you’d probably say something that didn’t ignore the problem, but offered counsel in an affirming way, like: “I can see that you’re unhappy with your weight, but this is something you’re capable of tackling, simply by making some small changes. Let’s think about what some of those small changes might be.”

Go though your entire list of negative self-talk statements, imagine the more affirming thing you’d instead say to a loved one going through the same situation, and write that down next to your negative script.

Greene suggests making your positive scripts as simple as possible when you can; for example:

You might have noticed that the examples of positive scripts given here have you talking to yourself in the second person (“You got this,” “You’re capable,” etc.).

It might feel silly talking to yourself like that, but research has shown that speaking to yourself in the second person can help with positive performance. Psychologists theorize that doing so puts some distance between you and your issue, which allows you to feel more in control of your thoughts and actions.

Next time you experience the trigger, use your positive self-talk script instead of your negative one. And celebrate when you do so: it could be as little as saying “Boom!” or pumping your first. Research from behavioral design expert Dr. BJ Fogg shows that small celebrations like this go a long way in creating new habits.