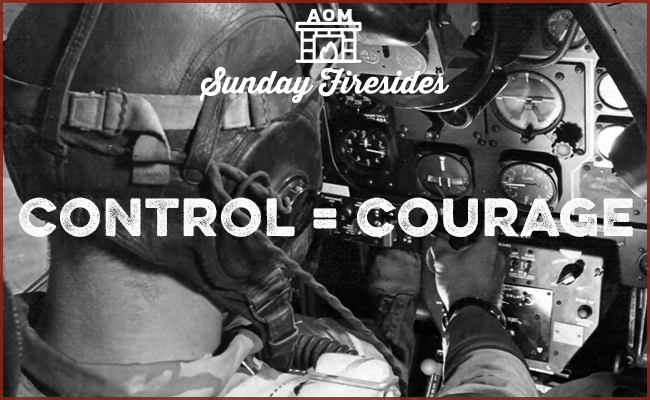 During both World Wars, Lord Moran, a physician who served as a medical officer during the first and Winston Churchill’s personal doctor during the second, studied the nature of courage. One of the interesting observations he made was that aboard military aircraft, the navigator experienced greater nerves than the pilot.

The reason for this, Moran surmised, was that the pilot had more to do: “In the presence of danger man often finds salvation in action . . . to stagnate in mind or body, is to surrender without terms. Whereas movement, work of any kind, helps to deliver him from those feelings which are traitors to his better nature.”

Yet it’s not just action itself which dulls fear, but the sense of control such action creates.

The modern civilian can readily see a parallel to Moran’s example in his own life: though driving is statistically more dangerous than flying, it’s less frightening to sit at the wheel of your car than as an impotent passenger on a commercial jet.

To experience life as happening to you, breeds feelings of helplessness and anxiety. Whereas believing you can influence your fate, generates strength and confidence. Control = courage.

The parent who advocates for their sick child at the hospital; the individual who practices answering questions before an upcoming job interview; a soon-to-be mountain climber who repeatedly checks his equipment before a trip; all will approach their challenges with a braver heart.

In every situation, there is always something you can do to exercise greater agency, and thus subdue your fears. Even if that is preparing to accept those things which truly cannot be changed, by intentionally developing stoic equanimity.

In any fear-ridden or anxious situation, ask yourself: “What things do I have control over? What options for action remain open to me?” For courage is born in the captainship of soul.