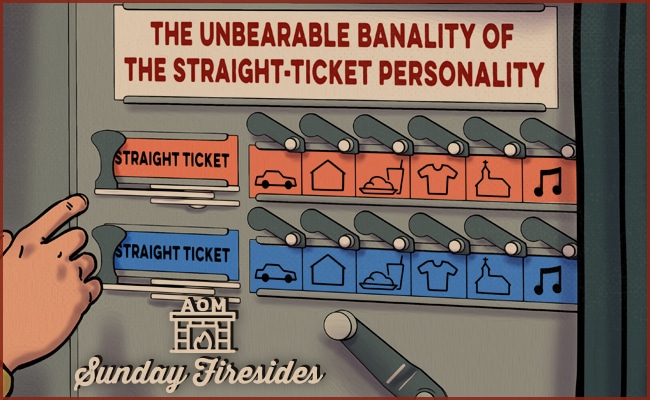 Once you know someone’s political party, you can probably guess all kinds of other things about them: the area they live, the car they drive, the podcasts they listen to.

Yet it isn’t always clear why holding a position on one side of the aisle necessitates embracing every other plank of its platform, nor why it is that your political party should dictate the pastimes you pursue, the diet you follow, and whether or not you believe in God.

Political parties bifurcate principles in a way that runs contrary to the complexities of the human personality. No one, if they’re awake to their unique experiences, should ever find that all their opinions line up with the subjectively drawn perimeters of partisanship.

In an election, people who choose straight-ticket voting — checking the box that automatically casts their ballot for every candidate in a particular party — typically haven’t studied their choices. They delegate their decision-making to a simple category.

Those with “straight-ticket personalities” have likewise turned off their thinking, both inside and outside the voting booth. Rather than evaluating how they feel, issue by issue, belief by belief, they opt for the ease of adopting an identity wholesale.

And become quite a bit less interesting as a result.

You achieve individuality by being willing to follow your idiosyncratic beliefs, even when they zig-zag outside partisan boxes; identity isn’t something you can pull the lever on just once. So be a gun-toting vegetarian. Or a church-going environmentalist. Anything, anything, but a straight-ticket personality bore.