One of the primary roles of men across time and culture is that of the warrior. Indeed, how we define masculinity at its core is centrally shaped by warfare. The virtues we think of as manly, like courage, physical strength, and daring, are vital in battle, and because men have primarily been the ones doing the fighting for thousands of years, we expect men to possess those masculine virtues.

But the way war is waged has changed throughout human history. If warfare informs our ideas of manhood, do the changes in war change our ideas about what it means to be a man?

My guest today on the show answers this question in the affirmative. His name is Leo Braudy. He’s a cultural historian and film critic and the author of several in-depth and engaging cultural histories. In his book From Chivalry to Terrorism: War and the Changing Nature of Masculinity, Leo delves deep into the cultural history of warfare in the West and shows how the changes in battlefield weaponry and tactics have changed our ideas of manhood. Leo and I discuss how the different ways Achilles and Odysseus fought battles created competing ideas of manhood among the Ancient Greeks and how we see that competition still going on today.

We then dig deep into the chivalric code of the Middle Ages and how aristocratic warriors combined Christian piety with pagan warrior fierceness. Leo then walks us through how the rise of the democratic nation state changed warfare and manliness. We end our conversation talking about how the current war on terror is subtly changing our ideas of masculinity today.

This is a fascinating show full of keen and thought-provoking insights. 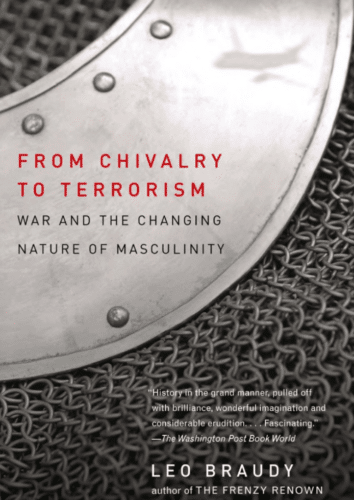 Leo is by far and away one of my favorite writers. He does such a great job weaving together what seems like disparate historical facts into a coherent idea. Be warned, his books are tomes. From Chivalry to Terrorism comes in at 656 pages. Despite being long, his books read surprisingly fast because they’re just so dang interesting.

Squarespace. Start your free trial today at Squarespace.com and enter code “manliness” at checkout to get 10% off your first purchase plus a free domain.

The Great Courses Plus. Get one month FREE by signing up exclusively at thegreatcoursesplus.com/aom.