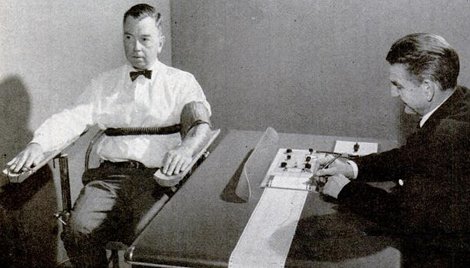 Have you ever been burned by somebody because they told you an outright lie? It can happen in your personal or business life-you’re on cloud nine when your girlfriend says she loves you, only to find out later she’s been cheating on you for months; a client says their business is solvent, but they end up bankrupt, and you lose a ton of money on an account.

Wouldn’t it be great to avoid these situations by being able to tell right then and there if someone is lying to you? Well, based on research by behavioral scientists and the work and experience of FBI agents and police officers, a system has been developed to help people become human lie detectors.

Below we provide a short introduction to the art of sniffing out a whopper. Ready to get started? Read on.

Caveat: Detecting lies is extremely difficult. It’s more of an art than a science. People can fool polygraph tests, so they can definitely fool you. There is no single behavior that indicates deception 100% of the time. Rather, detecting lies requires observing multiple behaviors and analyzing them using the surrounding context. Also, just because a person shows some of the signs we list below, it doesn’t necessarily mean they’re lying, just that they might be lying.

When we’re nervous or uncomfortable, we all unconsciously manifest our distress with the use of pacifiers. Like the name suggests, we use these gestures and body movements to help soothe and comfort ourselves in uncomfortable situations. Below is a short list of pacifiers many people display:

Every person has a different set of pacifying behaviors. Your goal at the beginning of a conversation is to know what pacifiers your potential liar uses. Once you know a person’s pacifiers, you can use that info to gauge their comfort and discomfort around certain topics.

Maybe somebody rubs the back of their neck all the time, not just when they’re lying. So in order to gauge someone’s level of comfort or discomfort, you need to establish a baseline for their behaviors. That way you’ll know when they deviate from it. Figuring out a person’s pacifiers is easy if you’re around them all time, but what if you’ve just met someone? How can you figure out the pacifiers of a potential employee in the short time you’re interviewing them? Well, most people display a bit of nervousness when they first meet new people, so you might see pacifying signs at the beginning of your encounter. Make note of them, so you can use them to read the person later in the conversation.

Again, just because a person shows signs of discomfort around a topic, doesn’t mean they’re necessarily lying. It just means you need to investigate that subject a bit more to find out the reason for the discomfort.

Get the Person Relaxed

After you’ve figured out the person’s pacifying gestures, get your subject relaxed and comfortable with you. Make small talk. A person will express their comfort with their body language. They’ll lean in closer to you, they’ll open up their suit coat, they won’t have folded arms, and their feet might be bouncing underneath the table. After you have the person relaxed, you can start asking the important questions. As you discuss certain topics, look for the pacifiers you identified earlier to reemerge. If they do, it could mean the person is lying to you.

Most people think that knowing the signs of deception is the only skill you need to sniff out a liar. Knowing the signs is necessary, but not sufficient; knowing what questions to ask and how to ask them is another vital skill to uncovering a fibber.

First, ensure that when you ask questions, you so do in a cool, detached, and non-judgmental way. If you go at a person NYPD Blue style, you’re bound to taint the subject; even an innocent person will act nervous if they’re accused of lying or feel pushed into a corner. So be nonchalant about the whole thing. You might even be surprised what comes out of a person’s mouth when they think you’re not suspicious of them.

What questions you should ask mostly depends on the context of the subject, but generally, the more specific your questions, the better. Vague questions will get you vague, unhelpful responses.

Look for Other Signs of Deception

In addition to pacifying behaviors, look for these other signs that you’re dealing with a liar:

Synchrony. When deciphering truth from lie, watching for synchrony is key. Synchrony is the proper alignment of what is said verbally and nonverbally, between events and emotions, and between the circumstances of the moment and what is being said.  For example, you normally expect a parent whose child is missing to be hysterical, begging for the police to get out there and find their baby. If a parent seems detached and aloof, something’s probably up.

Synchrony should also be present in the way a person moves their head. If a person’s head begins to shake either in the affirmative or in the negative as he speaks, and the movement occurs simultaneously with what he says, then you can typically rely on the veracity of the statement. However, if he does the head shake after he makes the statement, the statement is most likely false. You might even notice a person verbally saying “yes,” but shaking their head “no.” If what they say from their mouth doesn’t match with what their body says, you have a liar on your hands.

Little or no movement. Ever notice how animals will freeze when a predator is near? This instinctual behavior actually serves a survival benefit; it’s hard for predators to see something if it’s not moving. Well, humans do the same thing during moments of distress. When people lie, they tend to keep their body very still. The imminent danger in this case is getting caught lying. So our lizard brain will tell our body not to move, because maybe, just maybe, if we stay still, the other person won’t see that we’re lying. Got a friend who’s pulling a possum? Dude might be lying.

Lack of emphasis. When we speak, we naturally give emphasis both verbally and non-verbally to what we say. Hand gestures, inflections, and head movements accentuate our words. However, most of this happens unconsciously. When our limbic brain backs up what we’re saying, we’ll unconsciously use body language to  emphasize it. When our unconscious brain doesn’t back up what we’re saying, those emphasizing gestures will not be present. An innocent person accused of murder will probably pound their fist and yell, “I didn’t do it!” You probably won’t see that with a person who actually committed the crime (despite the show you see the guilty put on on Law & Order).

Check eye direction. When people concentrate on something visual, they tend to look upwards. If they look up and to their right, it means they’re concentrating on something visual that they’re remembering from their past. If they look up and to their left, it means they’re focusing on something they’ve created in their minds. So if the person you’re talking with looks up and to the left as they recollect what happened, they may be making up the story right there on the spot. Although you’d think they’d turn and look down and behind, since that’s where they’re pulling things out of.

Reading non-verbal behavior is a skill that will take a long time to truly master. Start paying more attention to the subtleties in your daily conversation, and eventually you’ll become a walking, talking lie detector.

Listen to our podcast on how to spot when someone is lying: