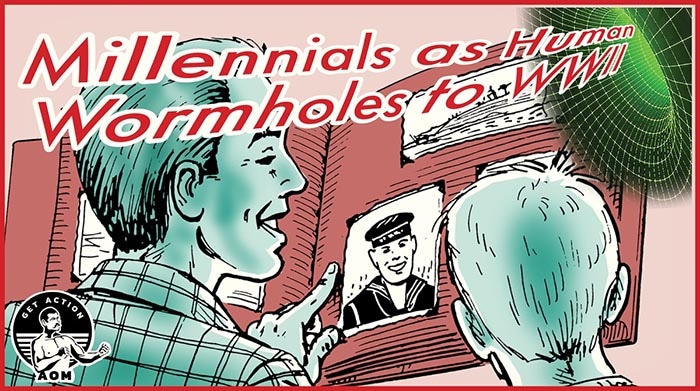 16 million Americans served in the Armed Forces during World War II. As of September 2018, there were less than half a million still alive. More than 97% of the veterans of WWII have disappeared from our ranks.

As the number of people who experienced the war on both the battle and home fronts has shrunk, so has the public’s interest in it. An author of books on WWII told me that interest in the war isn’t what it was even a decade ago, and speculated on the reason for that: fewer and fewer among the rising generations have a personal connection to this epic conflict — fewer and fewer had a relative who experienced it firsthand. To them, WWII is an increasingly distant, increasingly abstract, increasingly immaterial event in history. A faded black and white memory with all the dynamism and compelling color of a granite monument.

It is a duty of Millennials, we would argue, to bridge this gap. To stand as human wormholes to World War II.

“Human wormhole” is the term blogger Jason Kottke coined for the way an individual with a connection to a past period can collapse the seeming distance between it and the present. To know, for example, that two of the grandsons of John Tyler — who was born in 1790, the year after George Washington became president, and himself became the country’s 10th chief executive — are still living, and that the entire country’s history can nearly be encompassed in just three generations, is to suddenly feel that our nation wasn’t actually birthed all that long ago. As the curator emeritus at the Smithsonian Institution’s National Museum of American Indians wonderfully put it, to meet an individual like Joseph Medicine Crow, the last surviving war chief of Montana’s Crow Tribe (who died just three years ago), was to feel as if you were “shaking hands with the 19th century.”

When Millennials are as old as the generation who fought in WWII is now, that war will be almost as far away in time as the Civil War is from us presently. But it doesn’t have to feel unapproachably distant, if our generation — the last, as a whole, to have a living relative who experienced WWII firsthand — act as human wormholes throughout the decades to come. If we take our children and grandchildren to museums that memorialize the war, show them photos of our grandparents and share their stories, even have them watch the Band of Brothers miniseries. There will be something salient simply in letting them know that when they hug us, they hug someone, who hugged someone, who heard the news of Pearl Harbor over the radio, stood on the deck of a battleship that fired at the vessels of the Japanese, sat in the cockpit of a plane flying over Nazi Germany.

It’s the duty of Millennials to offer a wormhole, via our personal memories of our grandparents, that keeps alive the reality of certain truths: that there are times when the forces of good and evil really do starkly collide, all men must be ready to serve as citizen-soldiers, and mass solidarity and sacrifice is required. And that it’s possible to make such sacrifices and then modestly act as if doing so was really no big deal.

Through these wormholes, young people will hopefully be better able to put the inconveniences of modern life into perspective. To understand how, after the horrors of battles like Peleliu and Okinawa, Marine Private Eugene Sledge “could be sincerely grateful for the rest of his life for clean, dry socks” and struggle to “comprehend people who griped because America wasn’t perfect, or their coffee wasn’t hot enough, or they had to stand in line and wait for a train or bus.” To understand the truth behind the words of Ed Tipper, a member of the 101st Airborne Division’s Easy Company, who realized, after seeing the horrors of Nazi Germany firsthand, that “Freedom isn’t automatic; it has a price.”

Being transported through the human wormholes of our lives will reveal to younger generations that those who worked and fought during WWII — our grandparents, their forebearers — weren’t better than us, in being intrinsically made of exceptional material. Rather it will show that in facing a challenge that could have either drawn out their best qualities or their worst, made them or broke them, they chose to rise to the occasion. Through the portal of our wormhole witness, will be glimpsed a reverent memorial to that eternal possibility in human nature.