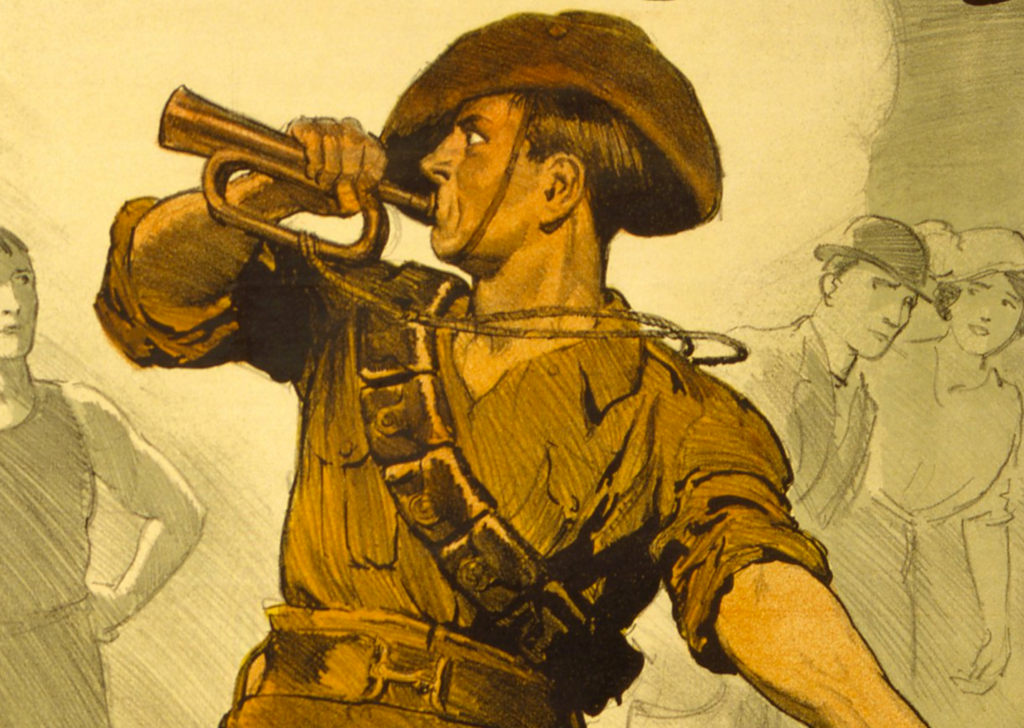 The Strenuous Life is a membership platform for those who wish to revolt against our age of ease, comfort, and existential weightlessness. The Bugle is the monthly newsletter for participants of The Strenuous Life, which highlights the strenuous going-ons of our intrepid members.

Below is what we sent members as the May edition of the Bugle. We wanted to give Art of Manliness readers an inside look at what’s going on over there. Click here to get on the email list and be notified of the next enrollment, which will open in late June.

Did you complete a badge requirement (or several) last month? Here’s a sample of those your fellow members were working on: 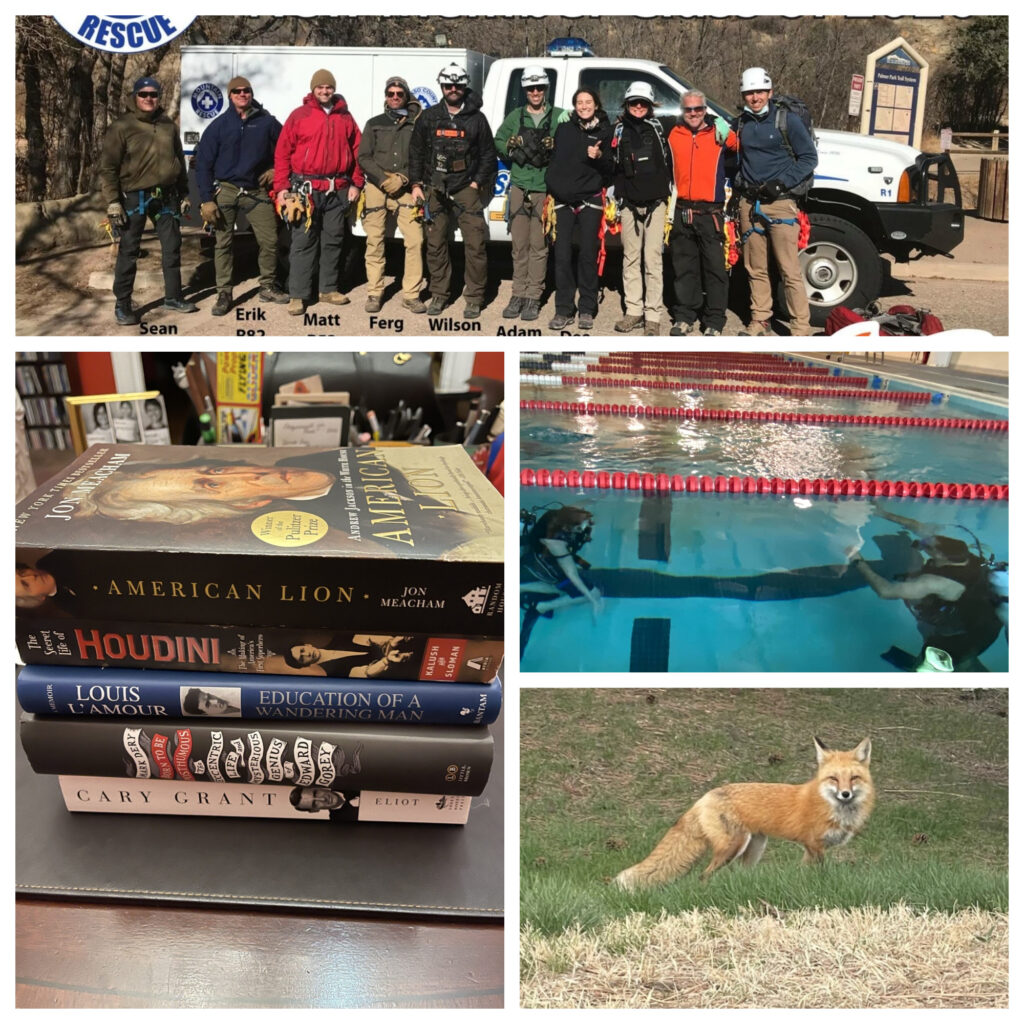 @adamr and @army2xvet completed hours towards the Community Service Badge by respectively responding to missions as part of his county’s search and rescue team, and serving as Assistant Scout Master for a Boy Scout troop (which included participating in activities like scuba diving lessons). @jeremyjmink tracked and photographed a fox for the Tracker Badge. @target242 read five biographies for the Biography Badge. 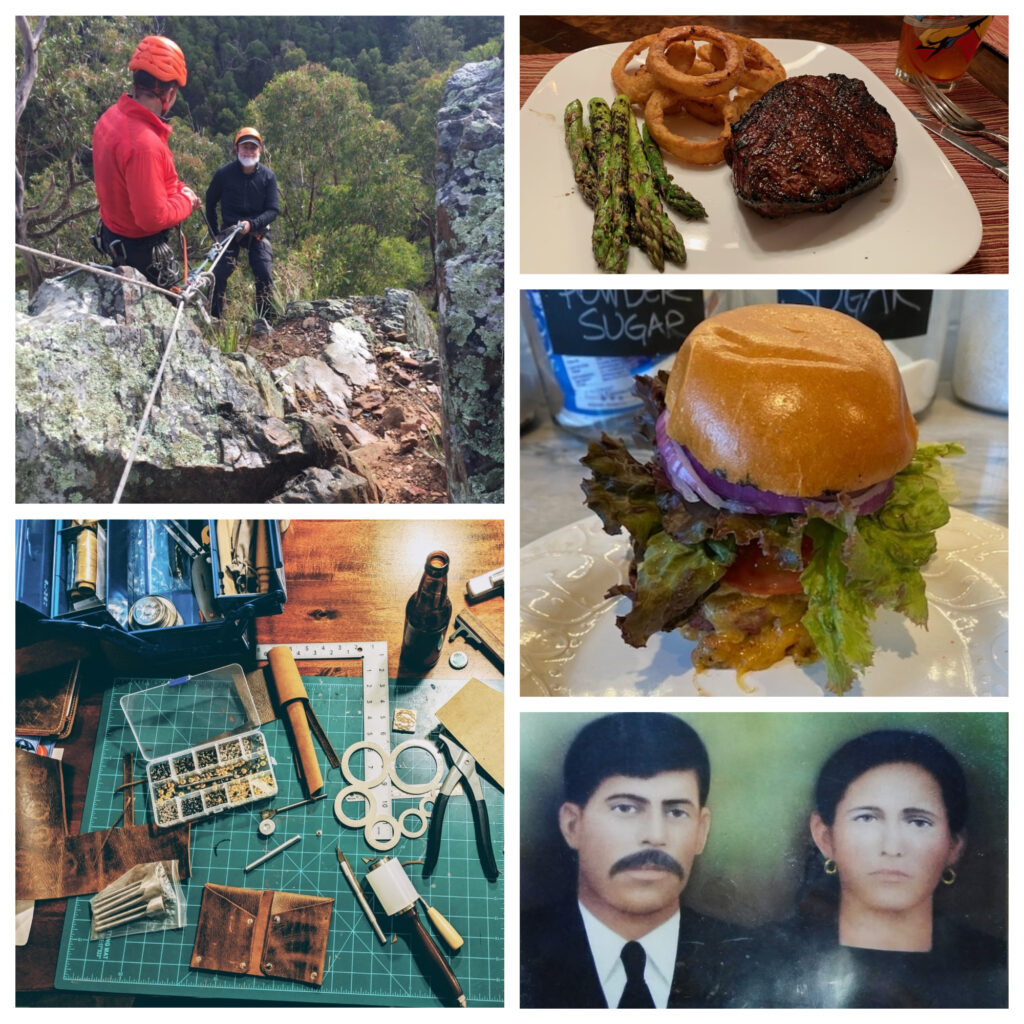 For the Microadventure Badge, @DaveJ completed a 10-km hike followed by a rock climbing/rappelling course. For the Backyard Chef Badge, @ronheise reverse-seared a ribeye, while @TheWood made a grilled bacon, jalapeño, and cheddar burger, topped with a homemade rub of garlic salt, cayenne pepper, cracked black pepper, cumin, sage, thyme, oregano, and a little brown sugar. For the Ancestry Badge, @mateocasi89 was able to acquire several pictures of his ancestors, including his father’s grandparents, while on a trip to Jalisco, Mexico. @rbosley37 completed a variety of projects for the Craftsman Badge, including a leather wallet. 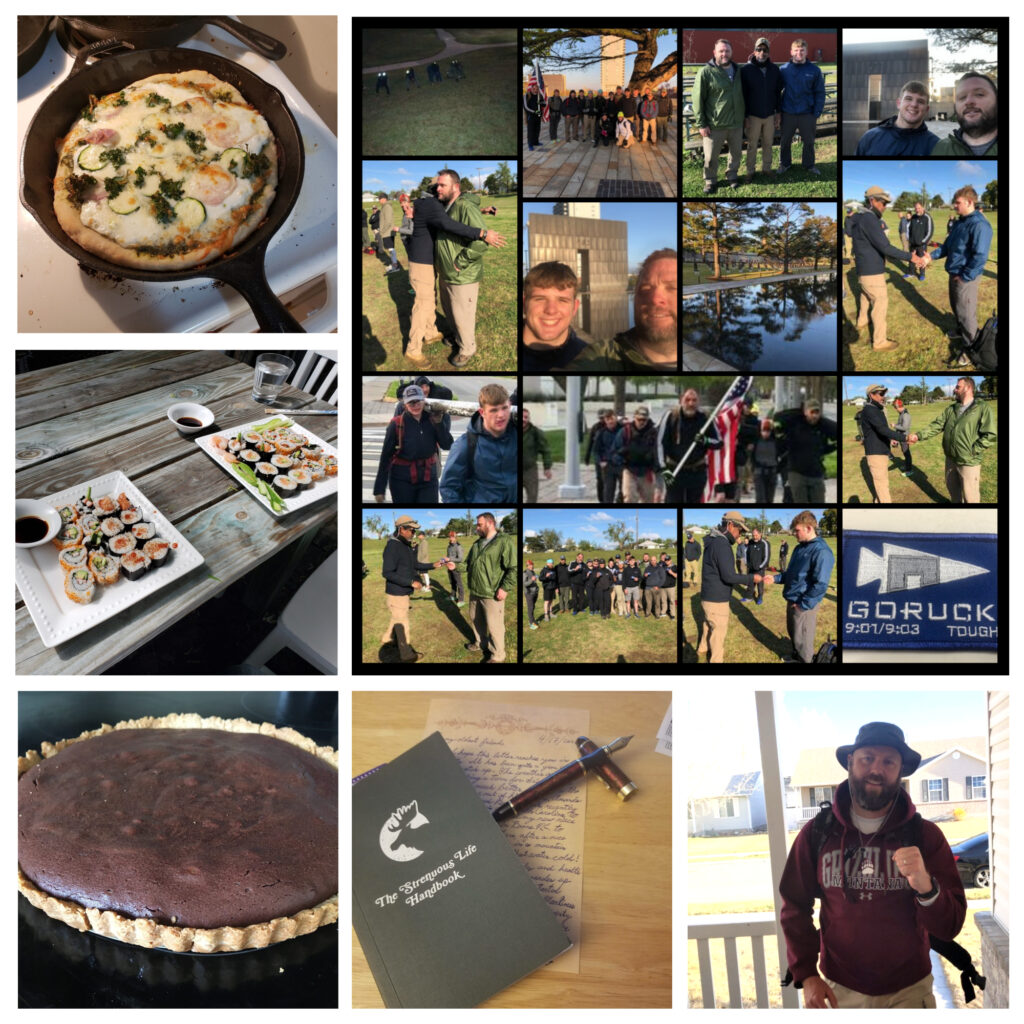 For the Kiss the Chef Badge, @jmaddox made pizza in a cast iron skillet, @VilenessFats made sushi (California and spicy salmon rolls), and @stachemaster3000 made a chocolate tart. For the Rucking Badge, @jdnichols rucked 50 miles in 48 hours with a 40-lb pack (“Easily one of the hardest things I’ve ever done, both physically and mentally”), while @nicktorious completed the GORUCK OKC Bombing Memorial Tough along with his 18-year-old son; Nick notes that it took place “One day before the 18th anniversary of my rock climbing accident that left me with a ton of metal in my spine and left leg,” and was “an experience I won’t soon forget.” For the Letter Writing Badge, @Mr.J wrote a letter to his childhood best friend who had moved to Hawaii. 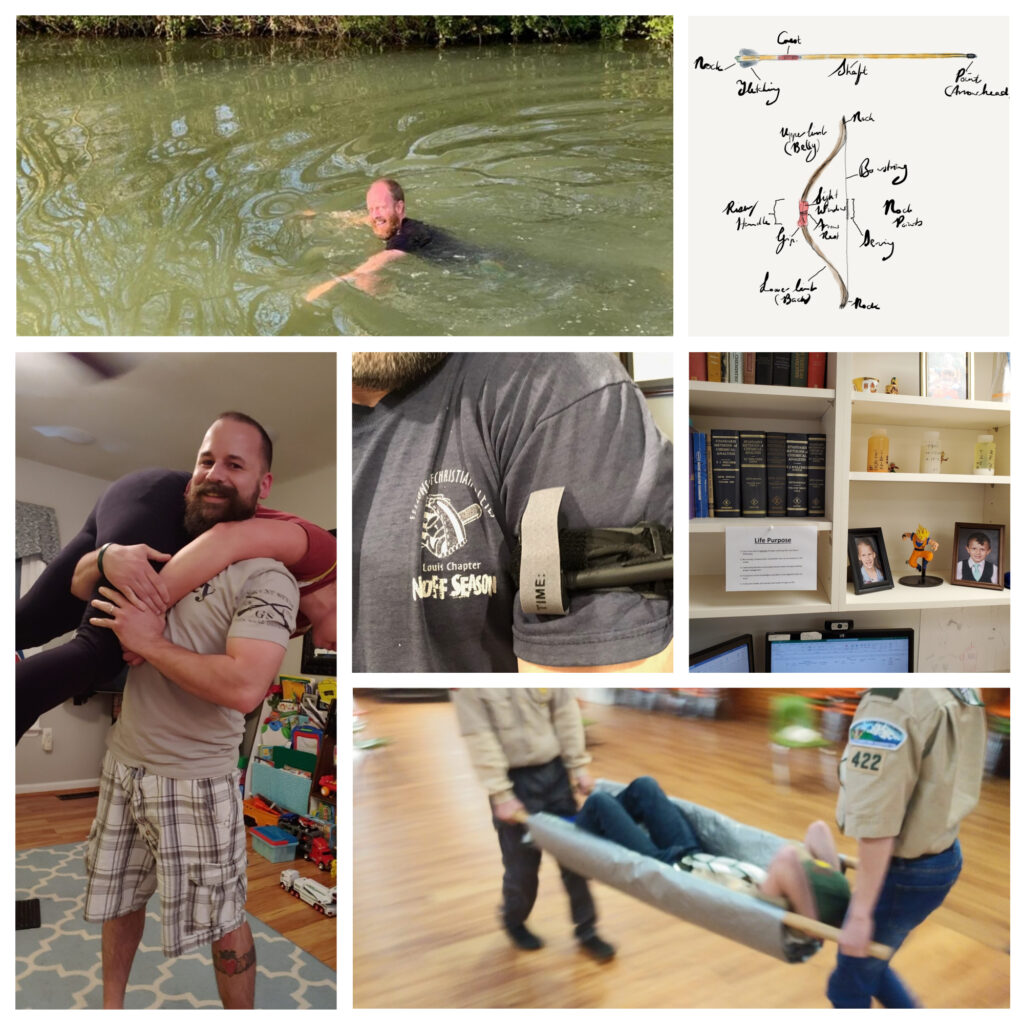 For the Frogman Badge, @ew7434  swam 50 feet in full clothes in a cold English millstream. @ariss drew the parts of a recurve bow and arrow for the Archery Badge. For the Monk Badge, @camronsf13 wrote out and hung up his life’s purpose. For the First Aid Badge, @jahill3 practiced tying a tourniquet, @old75blazer practiced making an improvised stretcher with his Boy Scouts, and @83djbailey practiced the fireman’s carry. 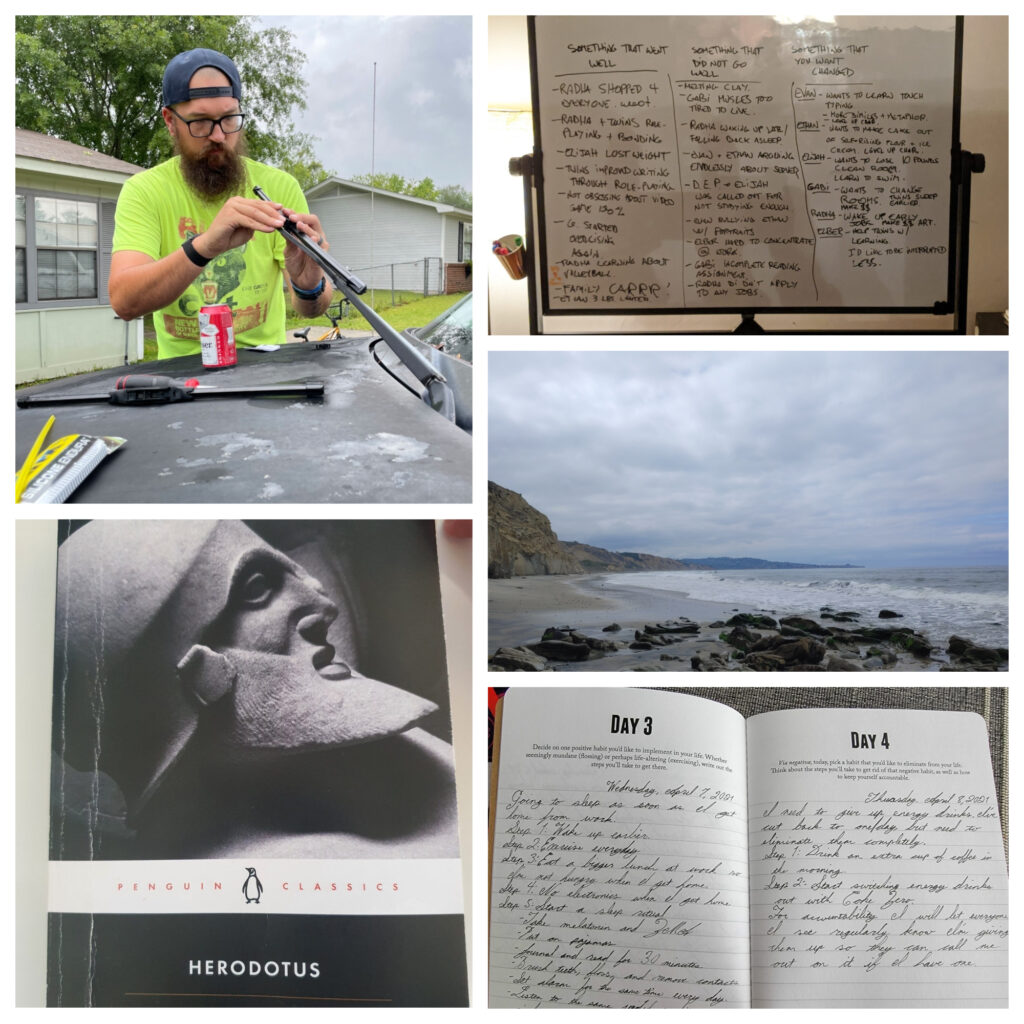 For the Gearhead Badge, @zachg changed his vehicle’s windshield wipers. For the Pater Familias Badge, @elber has started doing family and marriage meetings. For the Microadventure Badge, @joshuadaniel kicked off its 8-week challenge with a bang by attempting the 50-mile march; while he didn’t make it all the way, he did complete an epic 40-mile trek, journeying from Encinitas, CA, down the coast to Mission Beach, and back up again. For the Journaling Badge, @RustbeltHippie is working his way through the Jumpstart Your Journaling 31-day Challenge. 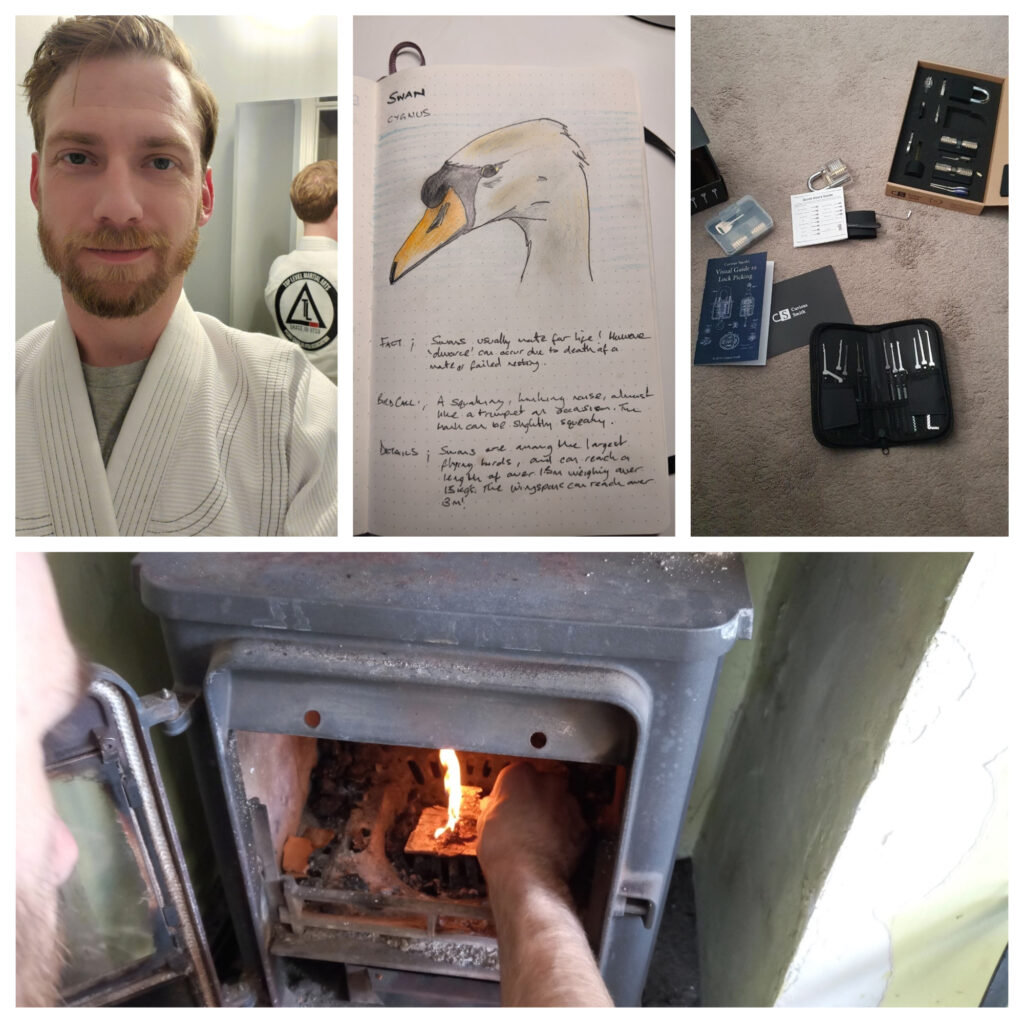 For the Rough Rider Badge, @redbeardnp signed up for Brazilian jiu-jitsu classes, while @Shaun sketched flora and fauna. For the Lock Picker Badge, @themanoftoday picked a tumbler lock in under 10 seconds. For the Fire Builder Badge, @the-walrus made a fire with birch bark and a ferro rod.

Here are some of the local chapter meet-ups which took place on April’s Strenuous Saturday, and at other times as well: 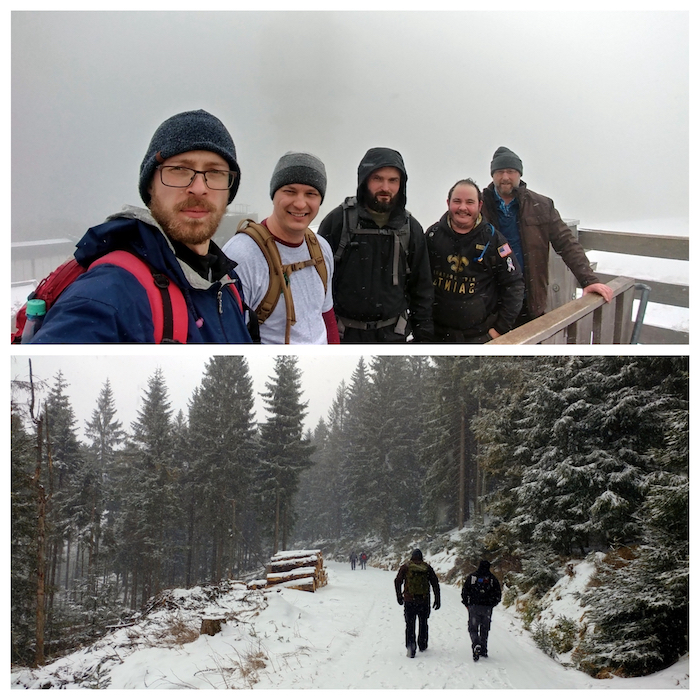 Members in Germany took a 15-mile, 8-hour, snow-filled hike, which took them past geologic and historic sites, and up two peaks in the Fichtel Mountains of northern Bavaria. As @s-c-hughes reports: “The main purpose of the hike was to train for other meetups later in the year: a 30-mile march as well as hiking the Zugspitze, the highest mountain in Germany, for the chapter’s 2021 StrenFest.” (More details on this below.) 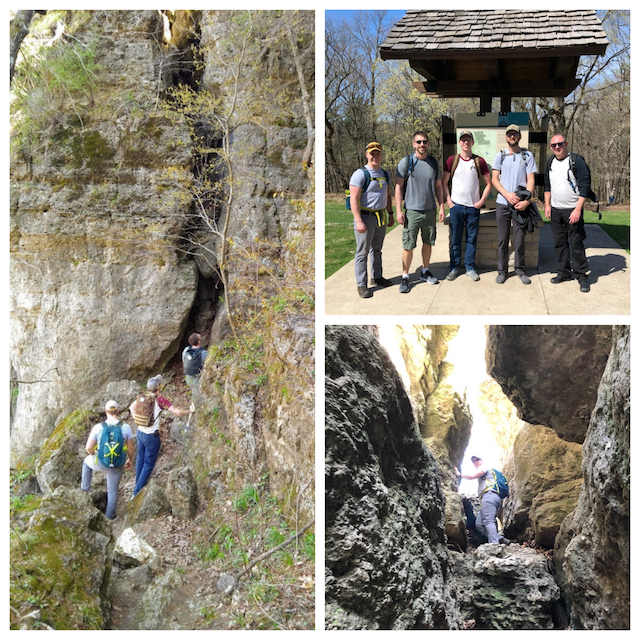 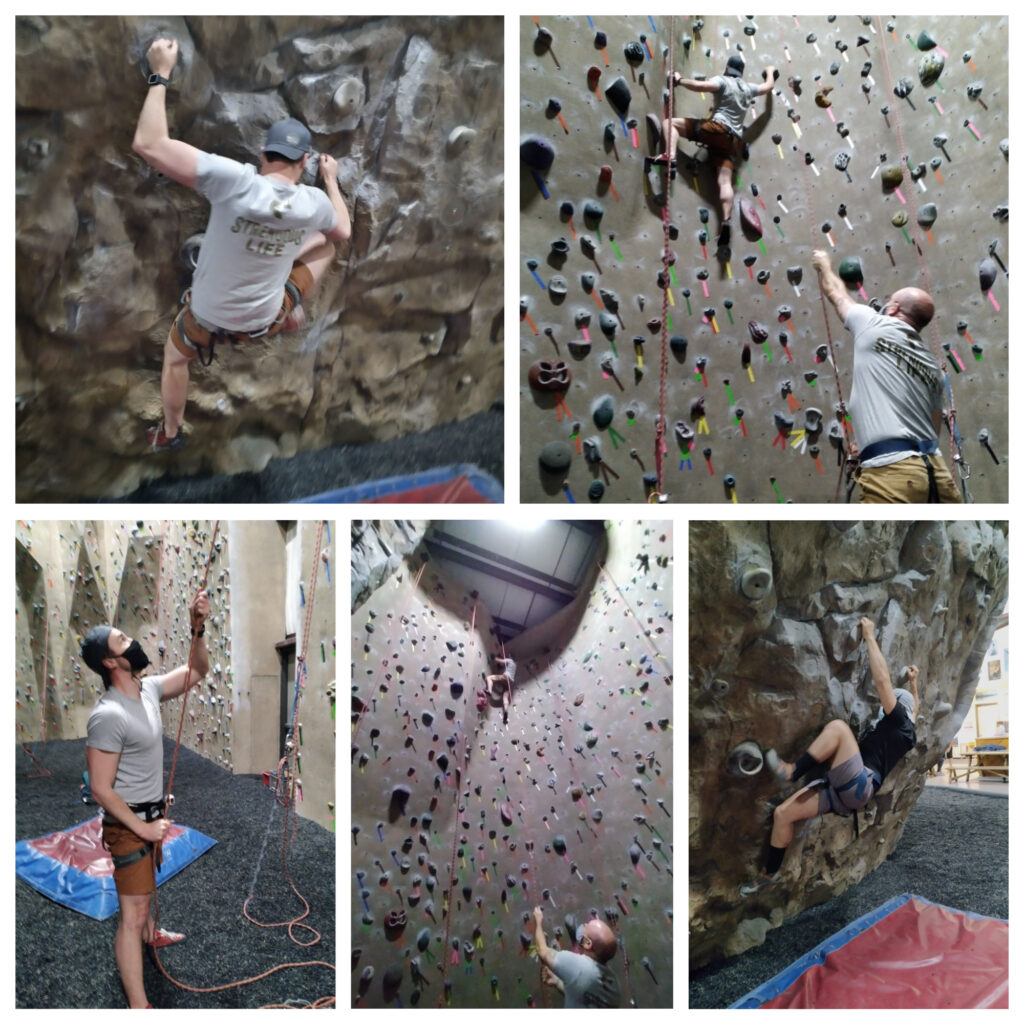 After months of staying connected via Zoom, the PA chapter held their first in-person meet-up of the year. @frankpepe, @chipbened88, and @averyb convened at a rock climbing gym for an afternoon of climbing and bouldering. 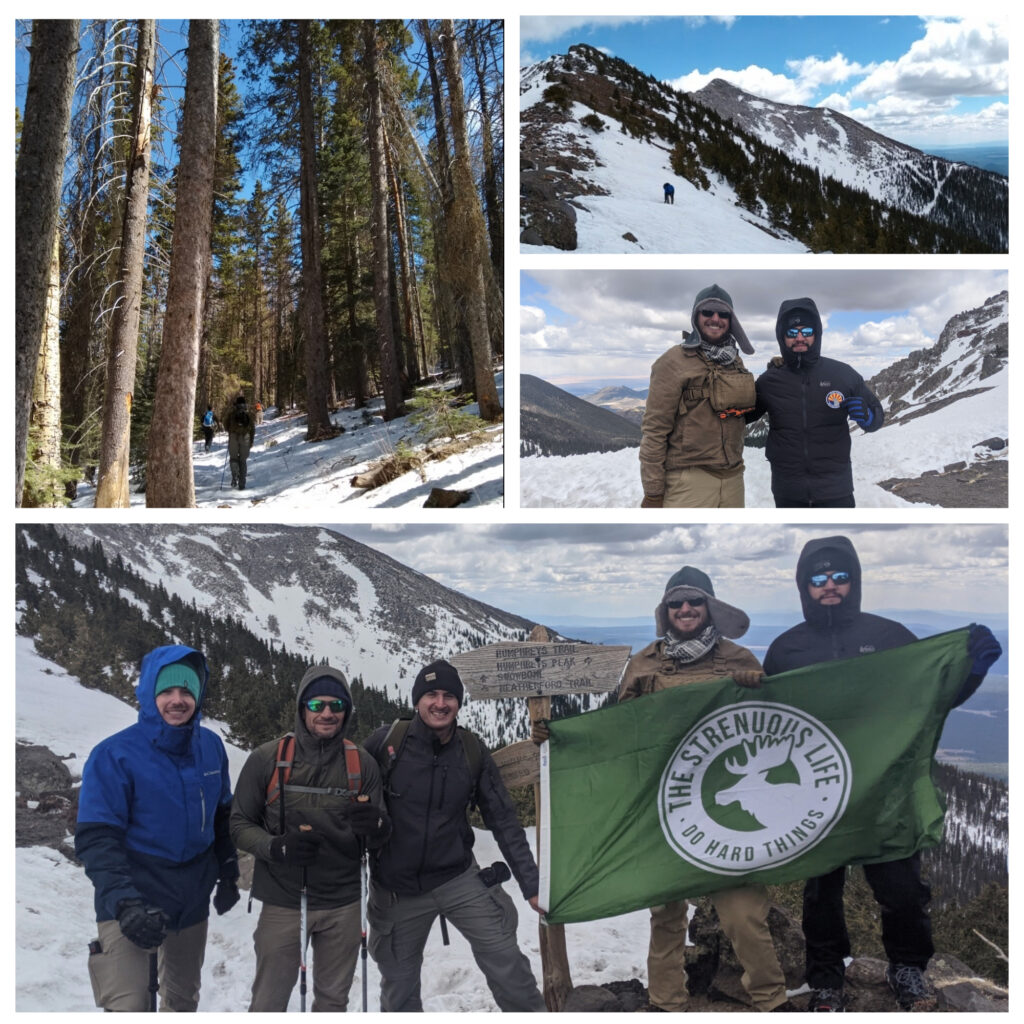 After sleeping over at an airbnb together in Flagstaff, @gwalliman, @cjarvis, @nicklarovere, @achintis, and @dalez_29 headed out the next morning to climb Humphreys Peak, the highest mountain in AZ. While due to weather and time constraints the men weren’t able to reach the peak (a goal for another day), they did make it to the mountain’s saddle and had a great hike along the entirely snow-covered trail. Says Garret: “The terrain was beautiful and challenging, and the snowy landscape was simply incredible for desert dwellers like us.”

Congrats to @dalez_29 who was awarded the Desert Rangers patch, which the chapter gives to those who attend three meetup events. 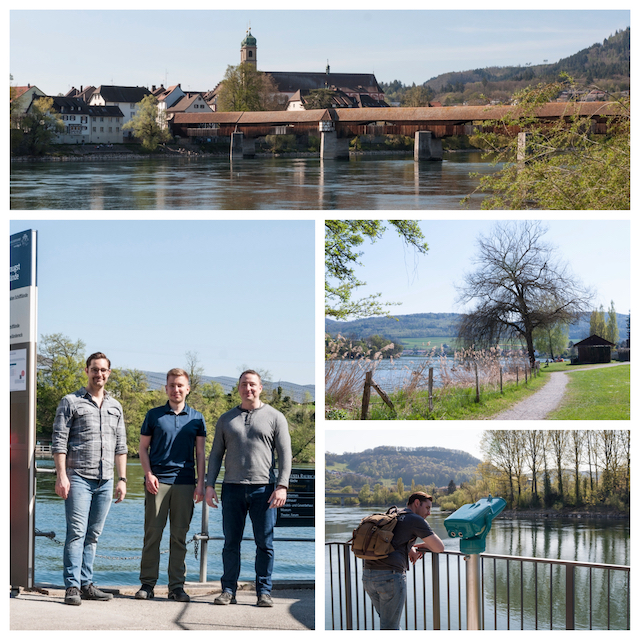 @jbernitz, @thomas-rohner, and @jarof took a 30-mile ruck/hike which started in Basel, and took them along the Rhine and through bucolic forests, meadows, and villages. While Thomas had to break off early due to a prior commitment, @jbernitz and @jarof completed the ruck in 11 hrs and 10 mins, thus knocking off one of the requirements for the Scout Badge. 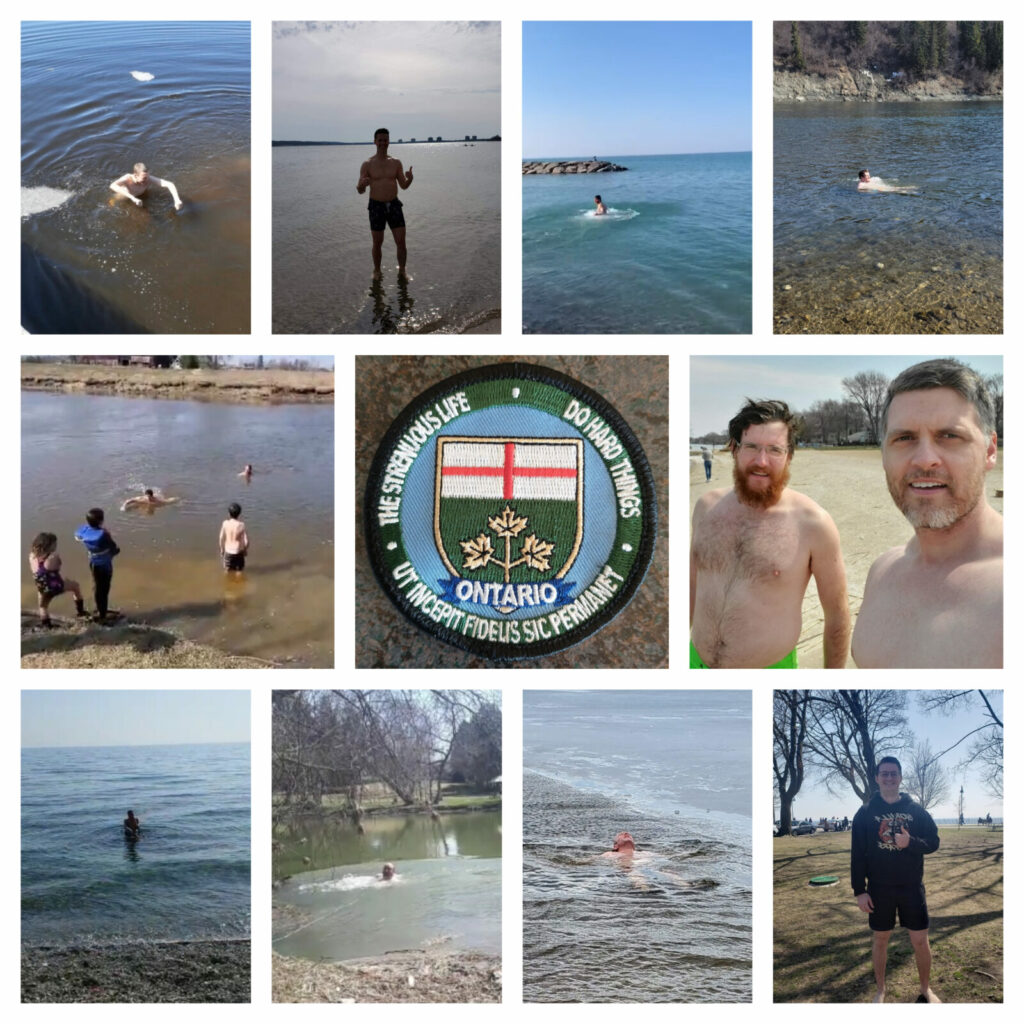 On Easter, members of the Ontario chapter took a polar bear (bunny?) plunge, with members who are in close proximity participating together, while those who live at a distance and are prevented from traveling due to regional COVID restrictions doing it solo. Participants were rewarded with the Ontario chapter’s patch, which is given for completing certain challenges. As @coryandsons reports, they’re “working on a series of ‘uniquely Canadian/Northern’ challenges that can be done throughout the year to earn” it. 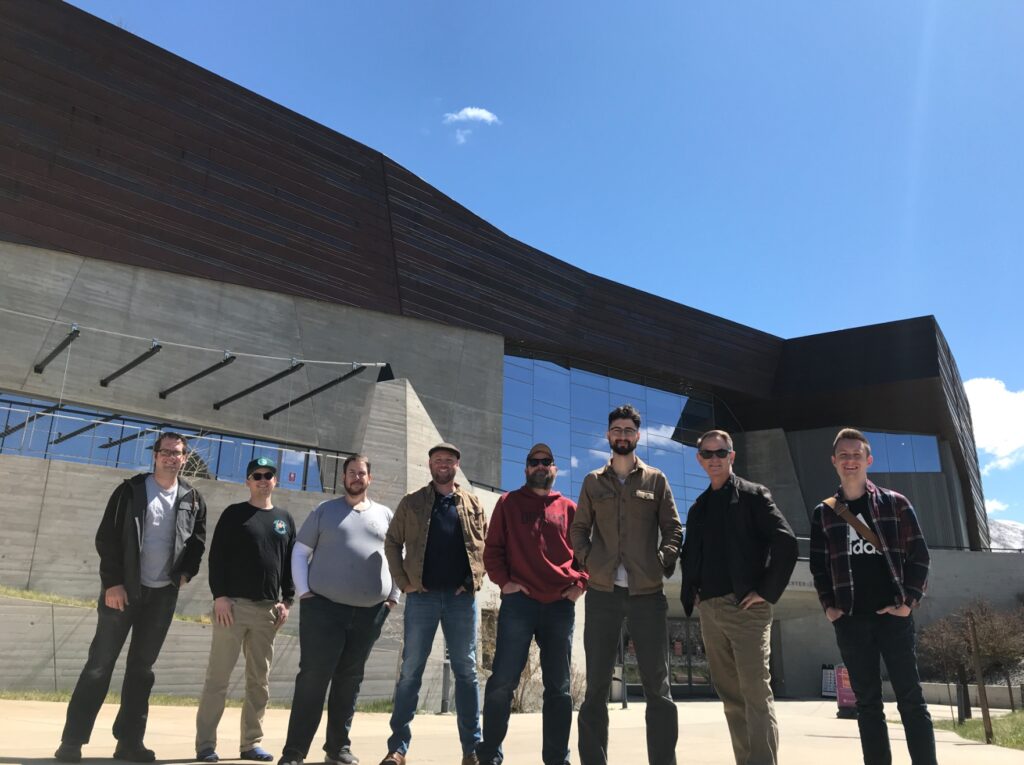 @jopasmith, @coolhandluke, @jdnichols, @blkftn8tiv, @nico, @davesonso, and @jakesebrigh met up to visit the Natural History Museum of Utah to check out rocks, bones, fossils and more, and thereby complete a requirement for the Rough Rider Badge.

The next Strenuous Saturday (the designated TSL meet-up day and the third Saturday of every month) is May 15 — head to the forums of your respective local chapters to see what’s already been planned, or to start a plan yourself!

The German chapter will be holding one this September (but you need to sign up for it now); @s-c-hughes offers the following announcement:

“The Germany Chapter officially extends an invitation to fellow European-based members (or beyond) willing to make it to the Bavarian Alps in southern Germany during the weekend of 24-26 September for our 2021 StrenFest (COVID depending, of course). Over a two-day excursion, we will be hiking the Zugspitze, the tallest mountain in Germany (9718ft/2962m). We currently have 14 slots filled and 9 still open for the taking.”

A Reminder on Other Upcoming Strenfests:

Classes 063 and 064 finalized their logos; the former was designed by @dez_ and the latter was a group collaboration.