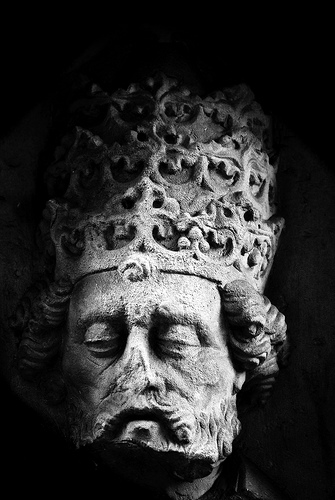 In order to get power and retain it, it is necessary to love power; but love of power is not connected with goodness but with qualities that are the opposite of goodness, such as pride, cunning, and cruelty. – Leo Tolstoy

We continue on in the 3 Man Killers series, focusing this week on the topic of power. Just like money, power has an intoxicating quality that can often prove fatal for men. From corrupt political rulers like Robert Mugabe of Zimbabwe to the CEO who thinks his position affords him some sort of pass when it comes to pompous and unethical behavior, abuses of power happen when people begin believing that they are above the law.

Properly harnessed power can be used to better the lives of our loved ones, associates, and society as a whole. But men must be vigilant in avoiding power’s potential to canker their soul, blind them to unethical decisions, and bring about their downfall.

How many times have you heard someone passionately proclaim, “If I were in charge things would be different!” All of us have a notion, some of us more than others, that if we could just get some power then things would be better. “Such men can envision no problems in there own future kingdom,” wrote Gene Edwards in Tale of Three Kings. In these men’s minds, if they were in charge, the stars would align, all war would cease, and we’d all hold hands and sing “We Are the World.”

So it comes as no surprise that men will go to great lengths, often sacrificing their integrity in the process, to obtain the power they so desperately desire. And when they finally get a little power they cling to it tightly, believing it has always really belonged in their hands anyway.

Yet, holding onto power is much like trying to secure a handful of sand- the tighter you squeeze the less you can have.

The Story of a King
King Saul found this out all too well. He was the first king of the Israelites and stood head and shoulders above other men. Handsome, strong, and well-spoken, Saul was the seemingly perfect vessel of power. Yet his story is one of great potential squandered. Like many men before and after, the lust for power ensnared his heart and he spent the final years of his reign desperately seeking to hold onto his throne at all costs.

The object of his wrath was a young man named David who won the hearts of the people after slaying Goliath. Every time Saul heard the people praising David, he cringed. “This young punk doesn’t know anything about leadership!” he surely thought to himself on various occasions. Eventually Saul’s lust for power pushed his petty jealousy into a murderous rage, and he soon sought David’s death.

In the end, Saul was unsuccessful. Not only was he unable to kill David, the Israelites were defeated in battle. Only death could save Saul from the defeat and shame he felt at that moment. Saul ordered his armor bearer to kill him, but the armor bearer refused to obey.

A king who once ruled vast lands with just a nod of his head was now unable to make even his own servant obey. This was the final blow. Defeated and powerless, Saul took his own life by falling on his sword. He ended up with nothing when he tried to have it all.

Just like Saul, we will all one day be given some power over someone or something. Maybe not over an entire nation, but power nonetheless. How we use our power will have a great effect not only on those under our authority, but on our own lives as well. To avoid ending up like Saul, here are a few ways to use power responsibly and keep it in its proper place:

1) Don’t Believe the Hype – When you’re the man on top people are going to tell you how great you are, how much they envy you, etc. Basically blowing smoke in places where smoke shouldn’t be blown. Depending on the situation, much of it may be completely insincere, but perception is reality. It’s easy to start believing it because we want to believe good things about ourselves. “You’re right, I really am an incredible leader now that you mention it!” But the second you start believing the hype is the second the clock starts dinging midnight. I’m not talking about healthy confidence, I’m talking about always going around thinking, I am the MAN!”

The problem with eating up all of this praise is that you quickly lose the ability to accurately and honestly assess how you’re really doing. It’s easy to believe you have no faults and nothing to work on and can do no wrong when that’s what everyone is telling you. You’ll be lulled in a false sense of security until, BAM!, the bottom falls out, and down you fall through a huge gaping hole you failed to see because your yes men were standing in front of it.

It is essential to keep close to you at least one man who will honestly tell you what’s what, keep you accountable, and tell you when the emperor is in fact strolling about in his birthday suit.

2) Check your pride. As we’ve mentioned when discussing the virtue of humility, pride is often thought of as a positive attribute. But it is the defining trait of a man who measures his self-worth in relation to others. This man is not driven to success to meet the personal standards he has set for himself, or to benefit others, but simply to have greater position and more power than the next guy. It’s all about how he stacks up against those around him.

When pride takes hold of a man, no plan of action can seem off limits. His fellow man is not his friend but his competitor. The prideful man is guided by the principal that if he doesn’t take advantage of an opportunity, no matter how unethical, some other man will. And that man will get ahead of him. If you speak to him of what is right and fair, he will counter that some other man profiting off his passed on chance is not fair either. And thus he can rationalize any choice based on the need to stay on top.

Pride also inflates a man’s ego and clouds his judgment. He reasons that if he is really so powerful then he need not be bound by the same laws and principles that govern mere mortals. He feels untouchable and finds himself justifying acts that he would have formerly found vulgar and immoral. But as we know, pride goeth before the fall. He will slip up. He will get caught. And his integrity will be shattered.

Instead of concentrating on how you stack up to others, focus on meeting and exceeding your personal standards and goals. It’s not about them. It’s about being the best man you can be.

3) Don’t lose touch. It’s lonely at the top. And once you reach that pinnacle and you’re not rubbing elbows with the common man anymore, it’s very easy to become out of touch with their perspective and concerns. You may be isolated from the day to day workings of your organization and the people you now exercise authority over. You no longer run in the same circles, deal with the same problems, and receive the same compensation as them. Far removed from those you lead, your policies and decisions will soon fall short of serving their best interests and will engender their ire and distrust.

Make it a priority to spend time with the people who serve lower on the totem pole. Go to the places and visit with the people that the men in your position don’t normally see. For example, David Neeleman, CEO of Jet Blue, tries to fly on his own planes at least once a week. He hands out snacks and drinks and talks with the flight attendants and the customers.

4) Lead to Serve – One of the strongest indicators of someone who has allowed power to corrupt them is the amount of power they use to serve themselves rather than others. Throughout history, the greatest leaders (for good) have also been the greatest servants.

Serving those we are in charge of is the best way to keep a right perspective about power. It stands in complete contrast to what most of the world teaches about power, yet if you look at people in your own life who you would call great leaders, chances are they have served you in some way. Serving others guards our hearts from the corruption of power by continually placing the emphasis on helping and promoting others rather than ourselves.

5) Spread the Wealth – It is often the practice of those in power to hedge their position by keeping all of the power, authority, and control to themselves. They live in constant fear that if they give any of it up they will soon find themselves being knocked off their throne by a younger, more ambitious competitor. This strategy seldom pans out.

A simple glance at history shows how this dictatorship-style power play often results in a swift and violent end. Followers can only handle so much of this type of leadership before they demand change.


In reality, the quickest way to gain power may actually be found in giving it away.

A much better path is to empower those underneath you to reach their goals as they help you accomplish yours. Show those you lead how accomplishing the organization’s goals will not only benefit you, but reward them as well. By establishing a sense of joint-mission, and sharing the power, you quickly gain the admiration and loyalty of those around you, thus increasing your power exponentially.
_______________
Part 1: 3 Man Killers: Money
Part 3: 3 Man Killers: Sex