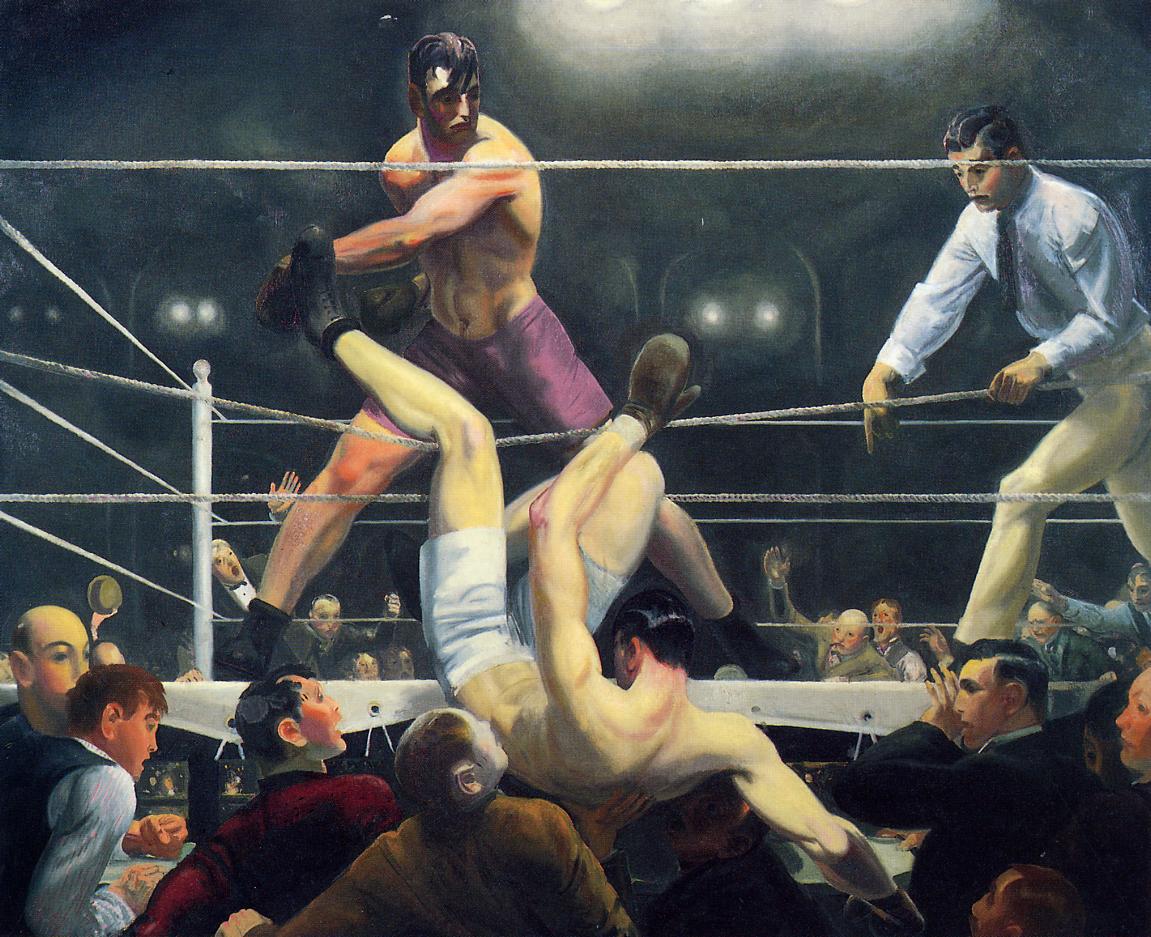 “Dempsey and Firpo” by George Bellows, 1924. This painting hangs above my desk.

Editor’s note: This is a guest post from author and Navy SEAL Eric Greitens.

My boxing coach Earl used to say, “You can’t get better fighting someone who’s worse than you.” That was cold comfort after my training partner, Derrick, had cracked me in the mouth with a jab. But I knew that Earl was right. Training with someone who was better than me made me better.

In 1950, the Associated Press polled the leading sports editors in America to find out what they considered the greatest sports moment in the first half of the twentieth century. It was from the fight in the painting above — that very moment — that they selected over all others.

Though largely forgotten today, the punch in that painting was thrown in 1923, in an era when boxing was the dominant sport of the day. A crowd of 80,000 had come to New York’s Polo Grounds to witness the contest for the Heavyweight Championship of the world.

See the man falling through the ropes? That’s Jack Dempsey. He won.

Jack Dempsey was boxing’s superstar. The “Manassa Mauler” earned his nickname with crushing punches. That evening, Dempsey was fighting the towering Luis Ángel Firpo, “the Wild Bull of the Pampas,” the first Argentinian to ever contend for the world Heavyweight Championship.

Toward the close of the first round, Firpo managed to pin Dempsey against the ropes. With a combination of vicious punches, Firpo knocked Dempsey out of the ring. As Dempsey landed, he cracked the back of his head against a reporter’s typewriter and opened a serious gash.

The ringside reporters shoved Dempsey back into the ring in time to beat the count. As Dempsey got his legs under him, Firpo quickly pounced to deliver another barrage of punches. Still wobbly, Dempsey was just able to fend Firpo off when the bell sounded to end the round.

Dempsey had suffered the most dramatic knockdown of his career. Yet he came out of his corner furious to start the second round. In fifty-seven seconds, he knocked Firpo out with a blow to the jaw.

Sportswriter Allen Barra narrates what happened next: “And then, in a moment of almost heartbreaking pathos, the tiger of just seconds before turned into a lamb, stooping down to help up his bloody, beaten foe as the more than 80,000 in attendance at the Polo Grounds roared their approval.”

Before that night, Dempsey had been one of the sport’s least popular champions. More often than not, crowds cheered for him to be knocked out. But that changed when the crowd saw him pushed to the limit of his ability, humbled, and still triumphant. It was Dempsey who defeated Firpo — but it was Firpo who made Dempsey an unforgettable champion.

We don’t know what greatness we’re capable of until we’re tested.

There’s a simple way to think about applying this in your own life. Here’s a formula I recently shared with a group of veterans from Iraq and Afghanistan, all of whom were making the transition to civilian life:

The magnitude of the challenge × your intensity = your rate of growth

It’s an idea, of course, not a mathematical formula.

But you do need big challenges in your life, and you need to bring intensity to those challenges if you aim to grow.

When I came home from Iraq and started working with veterans who felt stuck, I’d often ask, “What’s your challenge right now?”

I’d often ask them to think back on their military training. It was the hardest thing that most of them had done up to that point in their life, and almost all of them brought intensity to it. And then I asked them to remember how much they changed then, how much they grew.

When many veterans came home from war, they found that they were given many things: free tickets, gift baskets, blankets. What they needed, however, was a challenge. These were men and women of incredible ability, some of whom had done work overseas that was more difficult than anything their peers had ever done. And yet, home from war, people were no longer willing to challenge them, and, without a challenge, these veterans started to drift.

Recognize the paradox here. Life was — by almost any measure — easier at home. There are no bombs, no bullets flying. People had more material comforts. Their friends and their family were closer — and yet it was here, at home, that they were struggling.

When people feel stuck it’s often not because things are too hard, but because their goals are too small. Why work your heart out for a goal that’s small?

In that boxing match in 1923, Dempsey’s opponent was clear: Firpo. In most of our lives things aren’t as clear cut as in a boxing match; we may well be striving for a cause, for our family, for our team. But we can always ask ourselves, “What’s my challenge right now?”

Pick a big challenge. Maybe, even, pick the right and honorable fight — you’ll be stronger and better on the other side.

Eric Greitens is a Navy SEAL, Rhodes Scholar, boxing champion and humanitarian leader. The founder of The Mission Continues and the author of the New York Times best-seller The Heart and the Fist, Eric was named by Time magazine as one of the 100 most influential people. His book, Resilience, has just been published.