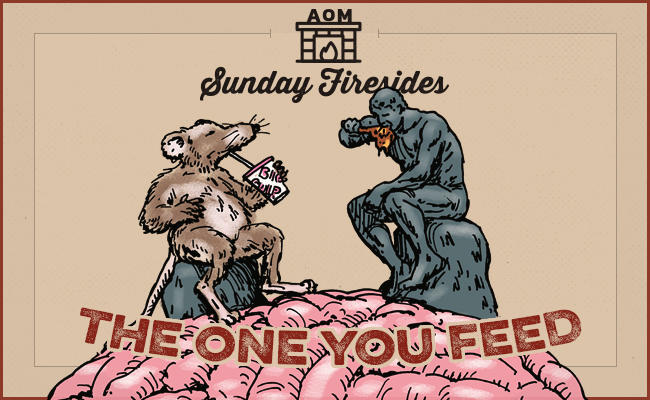 You may have heard the story, often attributed to the Cherokees, in which a grandfather tells his grandson of a fight that takes place within him between two wolves. One of the wolves is virtuous, and one is evil. When the young man asks, “Which wolf will win?” his sage mentor replies, “The one you feed.”

It’s a great little parable, and a lens that can be applied in another way as well.

Within your mind, there’s a conflict playing out between two different actors: a rat and a human. These respectively represent the lower, instinctive, primeval parts of the brain which we share with reptiles and rodents, and the higher, more complex parts which are unique to mankind.

Our appetites and instincts aren’t bad; they drive us towards the things we need to survive, thrive, and reproduce. But the rat can become glutted at the expense of the emaciation of what makes humans, human.

When I check my phone out of what can only be called a Pavlovian response; look at social media comments in which people communicate through memes and gifs, browse a reddit “discussion” in which the replies are completely predictable, peruse a website populated by clickbait; utilize any digital platform that’s been engineered to activate the rodent-like parts of my brain, I viscerally feel dumber. I feel my animal-ness. I feel like a rat in a cage, being prompted to push a lever to get more pellets of food. The more you push the lever, the beadier your eyes seem to grow.

Alternatively, when I read a meaty book, think through a philosophical question, listen to good music, contemplate interesting art, engage in a focused conversation, or experience nuanced emotions, I feel like a man.

Who will win the battle between the rat and the human within? The one you feed.