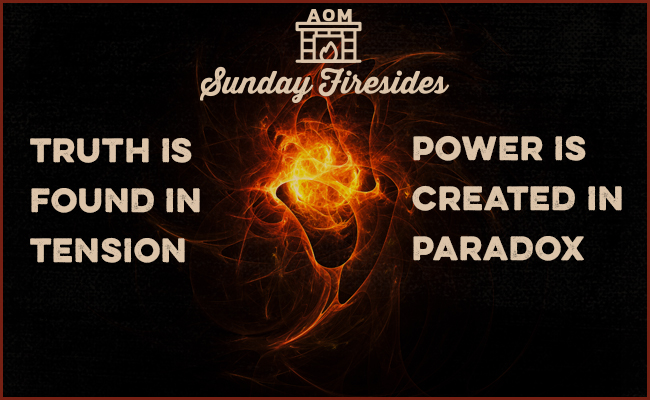 Have you ever heard a podcast which offered an approach to tackling a problem that seemed to make a lot of sense, only to hear another which presented a different tact, and made sense too? How do then you decide between those perspectives?

We often seek to minimize conflict in our philosophy, principles, tactics. We see competing ideas as essentially antagonistic — as either/or. It’s belief vs. doubt; faith vs. science; stoicism vs sentimentality; motivation vs. discipline; individuality vs. conformity; etc.

But instead of choosing one side, let both coexist.

I don’t mean that you reconcile the two philosophies together. Nor that you necessarily choose one approach or the other depending on the circumstances. Rather, I mean allowing both forces to fully operate in your life.

That may seem like a recipe for chaos, but adversativeness of approaches can be productive rather than destructive.

An attempt to completely reconcile two competing beliefs neuters both. Is there anything less interesting than the one-dimensional man — the believer who’s never entertained a doubt; the atheist who can’t admit to sometimes missing a sense of spirit — where you know what he will say on any issue before you even ask?

The most compelling people I know are traditional and forward-thinking; tough and tender; realistic and idealistic; skeptical and faithful. For like the atoms in a particle collider, the conflict between seemingly contradictory stances creates an animating, incandescent energy.

Allowing the collision of divergent ideas not only catalyzes momentum, it creates the footing from which it can launch.