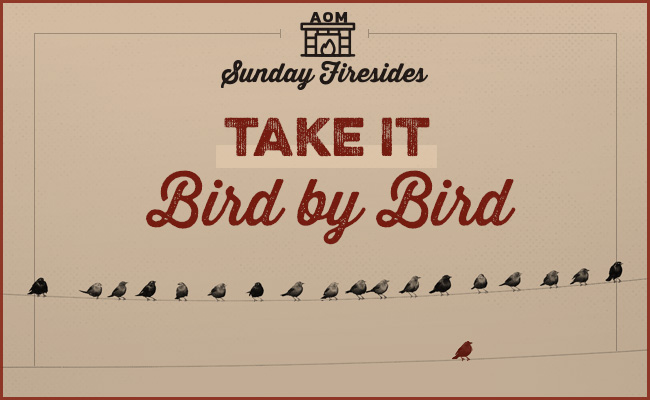 In a famous story shared by the writer Anne Lamott, she remembers a time from her childhood in which her brother had procrastinated working on a report about birds until the night before the assignment was due. He was in despair, sitting “at the kitchen table close to tears, surrounded by binder paper and pencils and unopened books on birds, immobilized by the hugeness of the task ahead.”

It was at this point that the boy’s father sat next to him, put an arm around his shoulder, and offered some words of comfort and counsel:

“Bird by bird, buddy. Just take it bird by bird.”

Since reading this anecdote a decade back, “Take it bird by bird” has become one of the most oft-repeated maxims around the McKay household.

Often in life we feel overwhelmed by the enormity of certain undertakings — daunted by the sheer number of entries on our to-do lists, the magnitude of challenges required by a professional project, or the breadth of what we need to change about ourselves to become the people we wish to be.

There’s so much to be done, and the nature of the tasks is so tedious or demanding, that the prospect of ever getting it all finished feels impossible. We are paralyzed into inaction before we’ve even begun.

Rather than trying to put your arms around the whole thing, attempting to see the end from the beginning, break it into parts. Focus on a single piece. What is the next action you can take? Get that knocked out. Move on to the next.

Take everything step by step.