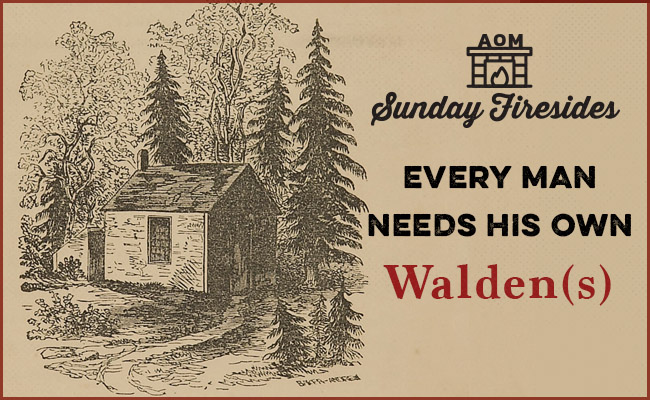 In recent years, it’s become fashionable to question the authenticity of Thoreau’s famous experiment in seeking greater solitude, simplicity, and self-reliance on the shores of Walden pond. “Do you know his cabin was just two miles from the town of Concord?” “That he sometimes went home to have dinner with friends and family?” “He didn’t even own the land on which he lived — Emerson did!”

Yet, Thoreau never intended for his sojourn to be something entirely “pure.” Instead, his point from the start was to make it something symbolic — an act which represented more than its component parts.

Thoreau wanted to demonstrate that it was possible to “live a primitive and frontier life — though in the midst of an outward civilization.” He wanted to show that recovering a bit of wildness didn’t require complete separation from society.

Thoreau wanted to practice what he considered the art of genius: the ability to raise the little into the large.

Modern men should follow suit in creating their own “Waldens.” Not necessarily in taking up suburban homesteading, but in developing symbolic practices — small, doable endeavors that stand in for bigger principles.

Waldens sustain your connection to the energies you value. Taking weekend hikes, playing pick-up games of basketball, spending nights working on a novel, ensure that the respective currents of exploration, competition, and creativity continue to flow through your life.

Waldens grant you access to archetypes that animate the psyche. A woodworking hobby keeps you in touch with the archetype of the Craftsman; biannual marathons, with the Athlete; morning devotionals, with the Monk.

A wish to “live deliberately” doesn’t require perfect purity, but simply carving out spaces, places, and habits emblematic of your ideals — modest moves that yet have outsized effects on preserving one’s identity in the midst of a maddening, workaday world.