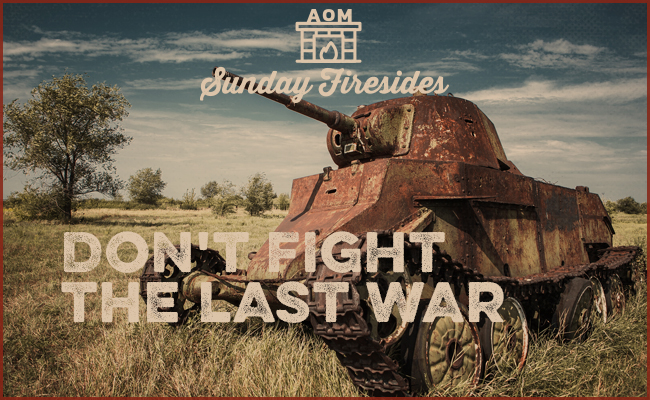 The idea is that a portrait of what the enemy is like and what tactics work best against him is created in the previous conflict, and then codified and turned into dogma. But when the next war rolls around, culture and technology have altered the landscape, so that when a fighting force initially attacks its new enemy using old approaches, it suffers great losses and defeats.

As it is in war, so it is in society and our personal lives.

Parents still worry about their kids getting into drinking, drugs, and sex, even though the rates of these behaviors have fallen dramatically in the last few decades. While they’re still battling with the ghosts of the 80s, a new enemy has arisen in loneliness and anxiety; parents remain concerned about what their kids get up to when they leave the house, when the more pressing problem is that they don’t even want to.

Pastors still give sermons about not trying so hard to be perfect, not being so legalistic, aimed at the zeal of the faithful two decades back (I Kissed Dating Goodbye, anyone?), even though the people in today’s pews aren’t struggling with excess passion and guilt, but with excess complacency and languor.

A man still operates with a chip on his shoulder, pushing back against the jocks who looked down on him in high school, even though they haven’t thought of him since graduation (and likely weren’t actually thinking about him before then, either).

In war, causalities mount before what’s really happening in the field catches up with the persistent-yet-outdated narratives of what should be happening. The sooner one can realize the new reality on the ground, and shift tactics accordingly, the sooner the tide can be turned.