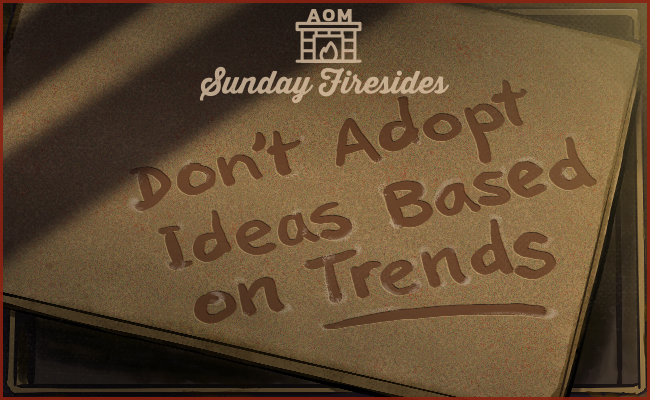 When we think about fads, we typically think about things like clothes and toys. But ideas — from those around diet to entire philosophies — can also ride the waves of cultural fancy. Keto, jiu-jitsu, and Stoicism will one day seem as outmoded as low-fat eating, taekwondo, and 90s-style evangelical Christianity do now.

Social issues similarly wax and wane, are talked about everywhere, by everyone . . . until some new topic du jour ascends in the news cycle, and the former largely drop out of the public conversation.

Adopting an idea because of a cultural trend, rather than true personal conviction, carries two dangers.

The first is that you may (temporarily) adopt an idea you don’t really believe, fracturing your integrity; posting about something on social media when everyone else is doing it, and then never posting about that issue again, should invite self-examination as to your vulnerability to peer pressure and commitment to critical thinking.

The second is that you may prematurely give up on something you do believe in, throwing out the baby with the bathwater once the latter becomes embarrassingly “over.”

In an episode of King of the Hill, young Bobby Hill starts hanging out with a group of skateboarding Christians, led by a rad dude pastor. Though his father Hank is pleased that Bobby is taking more of an interest in church, he worries that connecting the gospel to something so “relevant” will turn what might have become a lifelong commitment, into a passing fad.

So Hank shows Bobby a box filled with the trends of yesteryear — Hank’s Members Only jacket; Bobby’s Beanie Babies — as a way into offering this counsel: “I know you think that stuff you’re doing now is cool, but in a few years you’re going to think it’s lame . . . and I don’t want the Lord to end up in this box.”