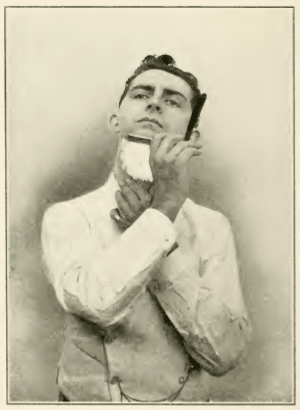 For the past few months, I’ve been doing some self-evaluation and have found myself wanting in some areas. For example, I’d like to increase my fitness level, become more productive, be less cynical, and increase my patience.  But it seemed like every time I set out to  improve myself in these areas, I’d get frustrated that results didn’t come as fast as I wanted and I’d give up. Soon I found myself stuck in a pathetic cycle where I’d get motivated to improve myself as a man, only to quickly end up back where I started. Then I would sulk about my inability to get my shiz together, resolve once more to improve myself, and then sink back into a funk of frustration. My wife, Kate, started to lose patience with me constantly saying, “This time it will be different! This time I’ll improve,” only to see me still in the same place personally as I’ve always been. She could no longer trust my professions about getting back on track.

One night as I was meditating on my inability to grow as a man, an image came to mind: a straight razor.

That image completely changed my perspective on personal growth and has helped me make more progress in the past few weeks than I have in the past several months.

So you might be asking “What does shaving have to do with personal growth?” A lot actually.

That night I recognized that the reason I wasn’t making progress was because I was approaching my growth as a man with a disposable razor mentality. Modern disposable razors allow men to just throw away a razor and replace it with a new, sharp one when the old one gets dull. It’s quick and requires little time and energy.

But as much as the self-help gurus and “lifehackers” would like to convince you otherwise, you can’t replace your character or form a new habit in an instant like you can switch out the Mach 3 blades on your razor. No, our character is more like an old-fashioned straight razor, and we should be treating it as such.

I have an old straight razor I found in an antique store in Vermont. If you look at it, you wouldn’t think it’s over 100 years old. It’s as shiny and as sharp as the day it left the factory that made it. Who knows how many men used it before me, and if I keep it in good shape, it’s something that I can hand down to my son or my grandson.

But using a straight razor requires daily maintenance. Every time you shave you need to strop it to get that keen edge to slice through whiskers, and when you’re finished shaving you need to dry the blade so it doesn’t rust and chip, and every now and then when the blade gets dull, you have to get out the hone and do some grinding. In short, using a straight razor takes a lot of work, but it gives you a superior shave and lasts much longer than its disposable razor cousins.

That night lying in bed, I realized that a man’s character is like that old straight razor. Just like a straight razor, a man’s character takes daily effort to be maintained in tip-top condition. It’s not just something you can work on for a few weeks before putting your life on cruise control. Instead it takes consistent, dedicated, daily effort. Yeah, the work we do to grow as a man can be monotonous and menial (just like stropping a razor), but it pays off in the end.

And just like a straight razor, we can pass down our characters to our posterity as a legacy that they can either enjoy and be inspired by or something that just ends up in the bottom of drawers and hidden because it’s no longer in serviceable condition.

It’s funny, but that “epiphany” I had that night didn’t teach me anything I didn’t know already. Of course, I knew that lasting change and growth takes effort and time and that there are no shortcuts. These are lessons we’re taught all of our lives. I just forgot them and bought into the disposable shaving mentality of instant gratification and instant results.

My “life is like a straight razor” insight was more of a needed reminder and put things back in perspective for me. I realized that we can’t pull who we want to be as men off of a shelf. Honor and character don’t come pre-packaged. No longer do I get frustrated when I don’t see results right away. I’ve just resigned myself to the fact that consistent, daily effort will bring results. There is no other way to get to where I want to be. I might not see changes right away, but they’ll come.

So what are those daily, menial tasks that help keep our razors sharp and keen? Here’s a list of things that I thought of:

Not very exciting, huh? And that’s the point. Stropping and drying a razor blade isn’t much fun either, but it works. Again, it just takes dedicated effort. Like I said above, my progress has been more consistent ever since I’ve replaced the disposable razor mentality with a straight razor mentality. It’s sort of like the tortoise and the hare. Slow and steady.

Listen to our podcast on all things shaving: