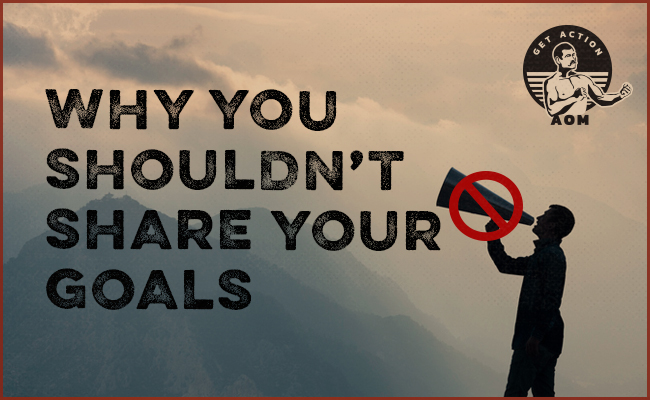 “I’m going to start a podcast!”

“I’m going to launch my own business!”

You’ve probably seen these sorts of posts on social media from friends and family members.

Maybe you’ve made them too.

People often share their goals out of sheer excitement, feeling that telling the world will only fan the flames of their motivation.

So too, folks make public declarations of their goals in the hope of increasing their accountability and making it more likely that they’ll accomplish their aims; they’re looking to leverage the fear of embarrassment in not following through as a way to keep themselves on track.

At least, that’s how it’s supposed to work in theory.

But when you follow up with goal proclaimers a few months after they shouted their good intentions from the rooftops, you’ll likely find that they haven’t made much progress or have given up on their fledgling projects altogether.

Well, counterintuitively, sharing your goals with others can actually sow the seeds of your failure. You’d be better off just keeping your mouth shut and quietly getting to work instead.

Below we explain why.

The first issue with sharing your goals with others is that it doesn’t create the kind of accountability you’d think.

When it comes to motivation, sticks are often more powerful than carrots, and it’s certainly true that the particular stick of potential shame and embarrassment can be an especially potent driver of action. ABC’s Primetime demonstrated this fact in 2009 when they did a special on losing weight. They found a group of people who were overweight and had made it a goal to shed some pounds and brought them into the studio to be photographed while wearing only swimsuits. The photoshoot captured in vivid high-dimension all the insecurities the participants had about their bodies.

But the producers didn’t stop there.

They also made a deal with these overweight people: if they lost 15 pounds over the next two months, the bathing suit photos would be destroyed and no one else would ever see them; if they failed, Primetime would show the photos on national television for millions of Americans to gawk at and cringe over.

This accountability system worked. All the contestants except for one lost the requisite weight and had their swimsuit photographs destroyed.

The threat of embarrassment in front of a national TV audience worked as an effective stick for weight loss.

So why doesn’t sharing your goals with someone or making them public on social media work the same way?

Because when you simply share your goals, there isn’t much of a threat for failing to follow through with them.

Let’s say you tell a friend about your goal to lose weight. They pat you on the back and say, “Atta boy!” But by the next week, they’ve largely forgotten about your resolution. They’ve got their own life to live and their own personal goals to accomplish. They don’t have the bandwidth to keep track of your goals too. If they see you digging into a Bloomin’ Onion, that might trigger a recollection of your resolution, but unless they’re very close with you, they’re unlikely to say, “Hey pal, weren’t you going on a diet?!” Most friends and family members won’t remember to check in with you about your goals, and will find it too awkward to hold your feet to the fire.

The same goes for social media declarations. You’d think because you’re sharing your goal with hundreds or thousands of people, you’d be more likely to follow through on it, lest you look like a doofus in front of such a large “audience.”

Your goal statement is one of a bazillion things people will see pop up in their various social media feeds. Someone might pause for a second to give you an emoji fist bump, but then they’ll keep on scrolling. Your goal quickly dissolves into the ocean of gigabytes pouring into their brains. They’re not likely to follow up with you in a few months to see how you’re making out with your project, because they’ve forgotten all about it. If you fail at your goal, there’s not likely to be any social consequences, and the tweet or Facebook post in which you prematurely planted your flag will have been buried deep within the infinite pile of internet information.

Public proclamations of goals, whether verbalized to friends or posted on social media, don’t work simply because they’re not designed with enough stick to make them compelling motivators. They don’t require you to put sufficient skin in the game.

Now, a public statement of a goal could work as an effective motivator, but you’d have to make the consequences of failing to comply with your intention hurt more. A lot more.

You’d have to do something similar to what the producers of Primetime did with the weight loss episode. If your goal is to lose weight, maybe you declare that your friend will post pictures of you shirtless unless you lose 15 pounds in two months.

Another way to create a pinch over the failure to comply with public intentions is to attach a financial penalty to it. Let’s say you tell a friend that your goal is to write a book by the end of the year, and that if you don’t make good on this commitment, you’ll pay him X amount of dollars. The amount is up to you, but remember, for it to work, the penalty has to hurt, acutely. $100 probably won’t cut it. $1,000 and you’ll feel the stick hovering over your head. You can set up penalties like these on the website stickk.com.

Bottom line: Sharing your goal with others can work to hold you accountable, but only if the consequences of failure are sufficiently severe. Just telling your buddy or sharing a post on Instagram isn’t going to cut it.

Be sure to listen to my podcast interview with Barry Nalebuff for even more insights:

Alright, so sharing your goals with others (usually) doesn’t provide adequate accountability to motivate you to work on your goal.

But, it gets worse: sharing your goals with others can actually de-motivate you to work on your goal.

NYU psychologist Peter Gollwitzer did a study where law students filled out a questionnaire that measured their commitment to making the most of their educational opportunities while at law school. Half the students dropped their responses in a box and were told that their responses were anonymous. The other half had to go over their answers with an experimenter — the idea being that this was similar to making a public proclamation of intention.

After that, both groups were given 45 minutes to work on legal cases. The first group, whose commitment had been affirmed with the experimenter, spent less time working on the cases than the second group, whose answers were anonymous. The people who talked a big game about working hard in law school failed to back up their talk with action, while the people who kept their intentions to themselves put their head down and got to work.

What Gollwitzer observed is that when we share a goal publicly, particularly one associated with our identity — starting a business, losing weight, becoming a better student, etc. — we often get positive recognition from others simply for making that goal.

You’ve probably experienced this when you’ve shared one of your own goals. You get lots of pats on the backs and kudos just for the good intentions alone.

“Really proud and happy for you!”

This feedback feels good. And that’s the problem. Your brain created your goal in the first place in the hope that its accomplishment would generate a reward in terms of positive feelings. When you get those positive feelings for just sharing your goal, your brain thinks the mission’s already been accomplished! It’s gotten the reward it was seeking, before you’ve even begun.

Thus, the positive feedback you get for sharing your goals counterintuitively squelches your desire to actually get to work on achieving them. Your brain is like: “Why work on actually losing weight when it feels like you’ve already gotten the reward for losing weight?”

You probably would have been better off just keeping your intention to yourself and getting started working on your goal. Wait to share your goals with others until you’ve made some actual progress on them. Connect the rewards of positive feedback purely to results, not intentions.

Put Your Head Down and Get To Work

But if you actually want to accomplish the thing you’ve got your mind set on, you’re probably better off keeping your head down and quietly getting to work.