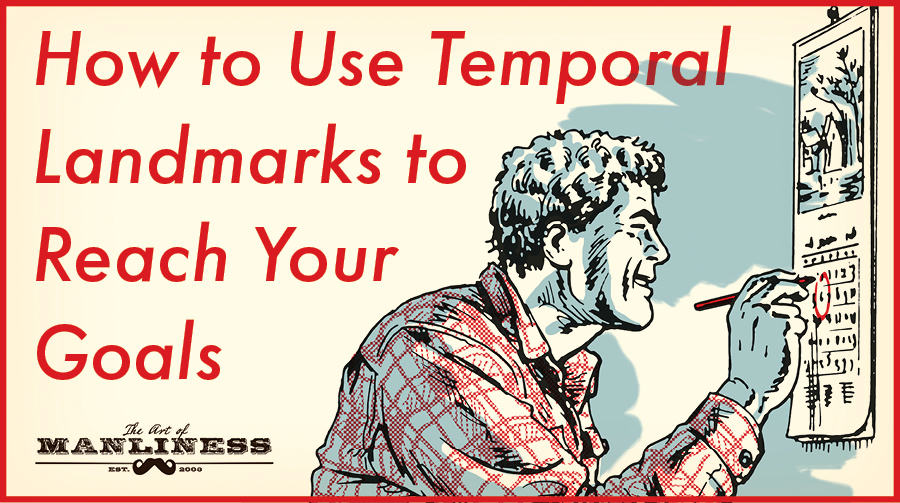 As you might imagine, data show that the number of people signing up for gym memberships and setting goals spikes on January 1st of each year. But these behaviors also surge on the 1st of every month, on birthdays, on the days the seasons change, and even on seemingly random national holidays.

Setting goals around certain dates is nothing new. Humans have basically been doing that as long as calendars have existed. But in the last couple years, research has emerged that backs the motivating power of what are called “temporal landmarks” — certain dates that naturally inspire us to turn over a new leaf.

We can use these temporal landmarks to our advantage, and give ourselves an extra boost of motivation that may have otherwise been hard to come by. Below I take you through what the research says on why these landmarks are effective, and then offer a few tips on making the most of them so you can more readily achieve the goals that have long been nagging you.

Researchers Hengchen Dai, Katherine L. Milkman, and Jason Riis (hereafter referred to as “DMR”), describe temporal landmarks as dates that have a significance that demarcates them from our “ordinary” days, and which separate a past period of time from the present/future one. They draw a boundary between one era in our lives and another, creating new epochs and new cycles in our months/years.

Social — those that everyone shares:


Personal — those that are unique to you:


As you can see, the opportunities for temporal landmarks in your life are many. Next, we’ll talk about why making a change in your life in conjunction with these dates is so effective.

Why Temporal Landmarks Work in Helping You Achieve Your Goals

Motivation isn’t everything when it comes to getting things done and taking action on our goals and responsibilities. But isn’t it sure nice when we are truly motivated, and don’t have to grit our teeth through every little task?

While motivation isn’t something entirely within our control, it’s influenced by a number of situational factors that are. From your environment and surroundings, to your diet and sleep habits, there are certain behaviors and settings that will make you more or less motivated to work on your goals. In light of that truth, we ought to tweak as many of the things within our control as possible, in order to create situations and environments that will best facilitate our progress.

Temporal landmarks fall into that category and can help set us up for success. While it’s easy to lampoon people who proclaim “New year, new me!” or “My diet starts Monday!” studies show that it is actually motivating and effective to begin a new habit around a temporal landmark. DMR posit two main ideas as to why:

1. Allows us to “close the books” and start fresh. Just as businesses close the books at the end of a fiscal year and move beyond those failures or successes, so can a temporal landmark close the book on a certain season of life and open what DMR call “new mental accounting periods.” As Daniel Pink writes in When, “This new period offers a chance to start again by relegating our old selves to the past. It disconnects us from the past self’s mistakes and imperfections, and leaves us confident about our new, superior selves.”

People mark their lives into distinct periods. We see our selves from past eras (our college years, our 20s, the years we lived in a different state, etc.) as being truly separate selves, and we compare those previous selves to our current self. Are we wiser? Healthier? Happier? When we take advantage of temporal landmarks, we allow our brains to start fresh and put a past self — one we weren’t necessarily happy with — into the history books. We’re more motivated to improve things if we believe we’re truly starting with a clean slate: “The old me never budgeted, but beginning on my birthday, I’m a budgeter from here on out. A new me!”

“when temporal landmarks psychologically disconnect us from our inferior, past self and make us feel superior, we will be motivated to behave better than we have in the past and strive with enhanced fervor to achieve our aspirations.”

I’d argue that it goes beyond just disconnecting from failures, but also successes too. Temporal landmarks can remind us that just because some things went well last year (or last week), doesn’t mean they will this year (or this week). New threats and obstacles may emerge, and we have to constantly work at it and never cease to improve ourselves. Temporal landmarks can keep us grounded in the knowledge that plateauing is sometimes just as dangerous as falling.

2. Allows us to see the big picture. When we see a temporal landmark coming up on the calendar, we’ll naturally pause and think about the big picture — whether of our life or our business. Think about it; you flip the page on the calendar to your birthday month, and doesn’t your brain automatically go, “Huh, I’m about to be one year older. What have I accomplished in the last year? In my life?” DMR’s research confirms that when we approach a landmark we tend to think of our life as a whole set of accomplishments rather than just what’s contained within our workaday weeks and months. This happens on a smaller level too. On the 1st of a new month, or the beginning of a new season, or even just the start of a new week, you’ll naturally tend to reflect on the period of time that has just been wrapped up, and what lies ahead.

A special date on the calendar (or yes, even just a Monday) can help you step outside the endless stream of day-to-day minutia and take a higher, more expansive view of your past and future.

How to Use Temporal Landmarks to Accomplish Your Goals

When it comes to staying on track in reaching a goal, you know you can use all the help you can get. Temporal landmarks are another tool in your arsenal that can push you in the right direction.

Here’s how to use them most effectively:

Give temporal landmarks power. In order for temporal landmarks to be useful, you have to intentionally give them power. If you let another birthday slip by (or even another Monday!) without reflecting on the past and thinking about how you’d like to better yourself moving forward, you’re wasting a good opportunity.

By starting something on a day that is already imbued with even a bit of extra significance and meaning, your brain is proven be more motivated to work towards your goals.

“fleeting fresh start feelings following temporal landmarks can [still] potentially be valuable . . . the abundance of fresh start opportunities throughout the year offers repeated chances for people to attempt positive self-change, so even if they initially fail, they may subsequently succeed.”

If you get off track as you move away from one temporal landmark, accept the natural ebb and flow of motivation, and use a subsequent landmark to get back on it. Goal achievement is often a cycle where you start and re-start something multiple times, and eventually, it sticks.

Of course, the key here is not to wait too long for another temporal landmark to come around. If on January 30th you’ve already failed in your new year’s exercise goal, don’t wait until the next January 1 to get back on the wagon. Re-up on the 1st of February and get back at it.

Use temporal landmarks to knock out “one-shot” goals. Since motivation spikes right after a temporal landmark, and then inevitably declines from there, DMR suggest that they’re particularly useful for taking care of more short-term, turnkey goals, rather than those that will require multiple steps and take a longer period of time. As they explain, “transient increases in motivation may be sufficient to help people fulfill important one-shot goals such as receiving a medical test or signing up for a 401(k) account with monthly payroll deductions.”

So if there’s something on your to-do list that you can knock off with a single action, use the boost of motivation you get from a temporal landmark to get it done.

Use bigger landmarks (or the anticipation of a bigger landmark) to set bigger goals. Since you’ll naturally receive an even bigger boost of motivation from bigger temporal landmarks like decade birthdays (20, 30, 40, 50) and the 5- and 10-year anniversaries of important events, use these milestones to set grander goals.

You may get the biggest boost, though, by setting goals the year before those big landmark dates come around. For example, there may be things you absolutely want to accomplish before you turn 30 or 40 or 50, and you can use your 29th, 39th, or 49th birthday as a temporal landmark for setting those goals. You’ll probably feel a natural rush of motivation around these threshold dates anyway — as Pink discusses in Brett’s podcast interview with him, the most common age of first-time marathon runners is 29 (they’re in fact twice as likely to run one as either 28-year-olds or 30-year-olds) — so ride that wave and set some audacious goals for yourself.

Think about the recovering alcoholic who clings to sobriety by measuring the passing of time since quitting. My mom’s husband, Andy, fell into this category, and told me that the idea of getting a new coin every month (at the beginning of recovery) or every year (a little later on) helped propel him to keep going. He remembers the date he became sober, and that date marked a turning point. In fact, he said that remembering the date is so important that folks in AA say if you don’t remember it, you’ll lapse. So on anniversaries, Andy is able to reflect on how his life has changed, and it motivates him all the more to stay on the path. (Congrats on 10 years this coming May, Andy!)

It’s worth noting that remembering a specific date in time is far more meaningful and motivating, as Andy noted above (and which DMR confirm in their research paper). Knowing you quit something on October 1 offers a better sticking point than knowing you quit sometime last fall.

So not only should you take advantage of starting/quitting things on temporal landmarks, but use those landmarks to stay motivated by celebrating anniversaries (even if they’re tiny — 24-hour or one-week snippets of time are important milestones when the barrier to success feels especially high).

Buy a physical calendar. What better way to assist in your efforts than by using a tangible item to help keep you on track? Not only can you physically turn the pages on a calendar, thereby relegating the previous month(s) to the past, but you can also visually see upcoming landmarks and important anniversaries. A physical calendar also allows you to use the insanely simple, but also highly useful, chain method of habit formation. Your only job, as Jerry Seinfeld says, is not related to the habit itself – which can be hard to mentally tackle — but simply to not break the chain.

For more insight on temporal landmarks, as well as how to use other aspects of timing to your advantage, listen to Brett’s interview with Daniel Pink: