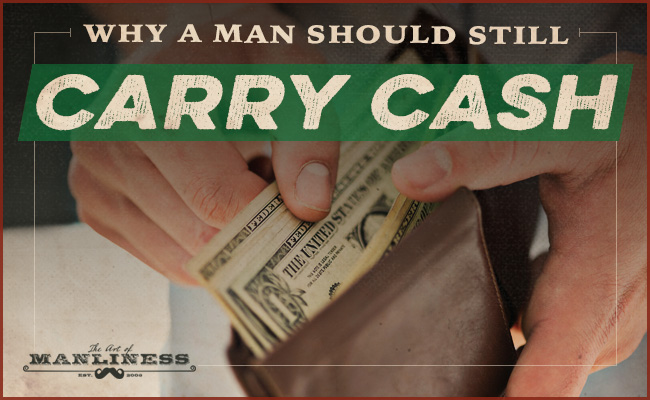 Cash is no longer king.

According to a U.S. Bank survey conducted last year, half of people only carry cash half the time, and among those who do carry cash, nearly 50% carry $20 or less. In another survey done just this year, only 41% of Americans said they regularly carry cash, a number that drops to 34% if you only include Millennials. 16% of respondents had no cash on them at the time they were polled.

The decline of cash is easily traceable. In a world where you can pay and tip your pizza delivery guy and “cabbie” (in the form of an Uber driver) online or from an app, where restaurant and store purchases are easily taken care of by credit or debit card, and peer-to-peer transfer apps like Venmo can be used to split a dinner bill or pay back a friend, many people just don’t see much reason to continue to carry around paper money.

But, there are in fact several good reasons to still keep an ample supply of greenbacks in your wallet, including:

1. To handle/take advantage of emergencies/opportunities that require cash. Even in this digital world, you’d be surprised (and very frustrated if you don’t have any cash) by the number of things that still require concrete cabbage. Roadside stands, super hole-in-the-wall restaurants, and food trucks sometimes only take cash, you need cash as a back-up if you lose your credit or debit card, and other unexpected needs arise all the time.

Here are just a few of the things I needed cash for in the last year:

It’s always good to carry cash both for handling things when they go wrong, and to be able to make sure things go right.

2. To pay and tip service providers more generously. Sure, even small-time restaurant owners, service providers (including barbers), and store proprietors typically provide a traditional credit card machine or offer Square Payment. But, it costs them to do so: anywhere from .2%-2.9% of the purchase price, plus a fee of $.10-$.30 per transaction. (Because merchants have to pay these fees both on the transaction of the purchase itself, and on the gratuity you leave, some don’t provide the kind of receipt that offers a line to write in a tip, not because they don’t expect one, but in the hopes that customers will pay that portion in cash.) So every time you pay/tip with a card, you eat into a merchant’s profit margin a bit, which can already be low for small-time operations. Credit card transaction fees can really add up over time. Mom-and-pop merchants and service providers thus tend to very grateful when you pay and tip them in cash.

Waiters are as well, both for the same reason — some restaurant owners deduct the transaction fees incurred from the gratuities charged on customers’ cards from a server’s tips — and for a couple additional reasons as well. The first is that when servers are tipped in cash, they can declare less of this money as income for the purpose of taxation, whereas the record of a credit card tip is set in stone. (Whether or not this is ethical, it is certainly common practice in restaurants.) Secondly, cash tips can be taken home by a waiter that very night, and be put to use just as soon, whereas credit card tips are often added in later to a server’s bi-monthly paycheck.

All in all, cash is a more generous way to pay and tip. Keep in mind though that if you don’t have enough cash on hand, it’s certainly better to tip adequately with your card than to leave a smaller amount or nothing in cash. At least in America, a gentleman always tips.

3. To tip employees/service providers who aren’t directly involved in customer transactions. Cash may be a better way to tip, but for the most part, employees and service providers who take credit cards in a way that allows for digital tipping — like Uber drivers and baristas — make out fine.

But there’s a set of workers who have seen their tips diminish as cash has disappeared: those who aren’t directly involved in a customer transaction. Folks like doormen, hotel concierges, airport shuttle drivers, parking valets, etc. You don’t conduct an actual payment transaction with them, and thus don’t get a paper or app-created bill where you can add a tip. Carrying cash is helpful for tipping these folks, and, as you may have noticed that many of them work in the travel industry, always be sure to stick some cash in your wallet before you embark on a trip!

4. To discipline your spending habits. Numerous studies have found that people spend more when they pay with a credit card versus cash. The tangibility of cash makes the transaction, and its accompanying “pain,” feel more real, while the abstractness of plastic makes the reality of the purchase more distant; you handle and count cash before turning it over, whereas with digital payments, money just mysteriously disappears with the tap of the screen or the click of the mouse. The greater “friction” of cash slows down your spending.

So if you’re trying to live on a tight budget, consider making all your purchases with cash. In the early years of our marriage, when we were barely getting by and yet serious about paying down our debt, Kate and I used the “envelope system” of budgeting. We created envelopes for different categories of our budget — groceries, entertainment, eating out, etc. — and then allocated a certain amount of funds, in cash, to each envelope. That’s how much we had to spend in each of those categories each month. Period. It was an easy way make sure we stayed on budget, and because of its simple concreteness, it worked.

5. To protect your privacy. Credit card spending creates lots of data, and this (non)paper trail can be viewed and used by the government and corporate financial institutions. You need not be a tin-hatted conspiracy theorist or a criminal operative to not want third parties tracking all your purchases and surveilling your spending habits. As Conor Friedersdorf writes in The Atlantic, while some politicians, economists, and “technocracy-friendly journalists” have called for and praised the desirability of a future society that goes completely cashless (and 61% of Americans think this is an eventual inevitability),

“Cash should remain, always and everywhere, because it allows, private, peer-to-peer transactions. In doing so, it decentralizes power in society (as well as adding a layer of resilience to the financial system—a diversification between the physical and virtual). Having stuff in society that elites can’t completely control is a good thing. Keeping a large swath of the economy away from Big Finance and Big Data is a good thing. Finally, people like cash; we shouldn’t let the elites take it away.”

Anonymous and untraceable, cash not only enables one to operate outside the digital financial system, creating a check on centralized power and a bulwark for personal privacy and freedom . . .  but it also, at the very least, allows you to purchase a gift for your wife without it appearing as a transaction on your shared bank account! Incognito mode, brought to you by cash.