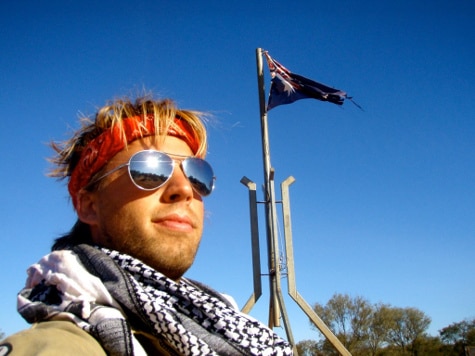 Warning: The reading of this post may cause extreme pangs of restlessness to all cubicle dwellers. Side effects may include the quitting of one’s job and the booking of flights to Australia.

Seriously though, this interview is a fun one–and offers a nice bit of inspiration about hustling and going after your dreams to any man.

The provider of that inspiration is Andrew Collins, who guides motorcycle expeditions across the vast expanses of Australia.

I’m Andrew Collins, 23-year-old American raised in the Boston suburbs and educated at the University of Vermont.  I’ve also lived in Stockholm briefly, and have traveled all over the U.S., Europe, and Australia.  I’m currently employed as an Expedition Guide for a motorcycle tour company called Outback Adventure Treks based in Australia.

Since April of this year I’ve been spinning wrenches, driving trucks, and riding motorcycles in some of the wildest places you can do such things.  Our company sets up off-road endurance challenges for clients in the form of multi-day tours.  We bring bikers across deserts, jungles, and mountains for one to four consecutive weeks of extreme riding.  As a guide, I’m either riding ahead of the group scouting the route and making sure our clients are okay on the trail, or bringing up the rear in our massive 4×4 support vehicle.  This truck serves as our “life support system” carrying food, fuel, tools, and a satellite connection to civilization.  It’s primarily a two-man operation; the boss and I swap riding and driving as he sees fit.  I also prepare food, help make and break camp, and assist in any medical or mechanical situations that invariably arise while on tour.

In addition to touring, we compete in desert races all over Australia including the massive “Australian Safari”–a seven day navigation rally in which racers and support teams don’t know where they’re going until they’re on the course, reading directions from a real-time turn by turn “road book” just like the (in)famous Dakar Rally.

2. Why did you want to become a motorcycle expedition guide? When did you know it was what you wanted to do?

I had a passion for adventure, a passion for vehicles, and a determination to combine both into a job.  You’ve seen those black-and-white pictures of scholarly types leaning out of Land Rovers in pith helmets?  That’s what I wanted to be: a gentleman on a quest for something important, in a cool outfit and an even cooler vehicle.

Of course, that kind of thing doesn’t really exist the way it did in Rudyard Kipling novels.  Not now, maybe not ever.  But I just couldn’t see myself sitting in a cubicle and writing Excel formulas eight hours a day for the rest of my life.  So instead of finishing school with a degree in business like I had originally planned, I started branding myself as something of a “modern adventure scholar” about halfway through college.  I studied anthropology, archaeology, became certified in CPR and wilderness medicine.  I also did some off-road driver training days with Land Rover and various 4×4 clubs.  In winters I worked as a ski instructor at a nearby resort, that being my first foray into the tourism industry.

But New England didn’t really have the backdrops I had in mind for my adventures; I had to get somewhere exotic.  So I looked to Australia–far away, conveniently English speaking, and of course the off-roading capital of the world.  Nowhere else can you travel the distances you can in Australia without seeing another person and still enjoy political stability.  Besides that, the whole country is crazy for adventure driving and even the “shelias” have upgraded suspension on their SUVs.

So I tried to get in touch with as many people as I could who had anything to do with adventure tourism in Australia, who I found through the magic of the internet.  I hadn’t heard many (any) encouraging responses but decided to take a stab anyway.  After liquidating most of my property, and begging Grandma for some post-collegiate financial aid, I bought a temporary working visa plus a one-way ticket to Sydney.

A few weeks later I was sweating bollocks in the Australian summer with a gym bag holding all my worldly possessions and a massive hangover from sucking down about twelve of those mini scotch bottles over the Pacific.

I traveled up the east coast for a few weeks until finally, I got the attention of the right person.  After striking up a conversation about motorcycles with a guy I saw leaning on a Honda Dominator, he mentioned a company that led “crazy tours” on motorbikes through the outback.  I went straight to an internet café, found the website, emailed the owner and sure enough he was interested in meeting and vetting me out for a job.

I hopped the next bus to his location and met the guy at a bar.  I had to use every scrap of energy I had to contain my excitement as he described his operation; phrases like “most extreme motorcycle tours in existence,” “helicopter rescues,” and “desert racing” were casually coming out of his mouth between sips of ale.

I was deep in my imagination picturing myself blasting over a sand dune in body armor and aviator sunglasses when I heard him say; “That sound alright?”

Later I figured out that last question was referring to the paltry salary, but it mattered not–I was shaking his hand and signing up for a season of riding motorcycles, driving off-roaders, and traversing the desert for a living.  Needless to stay, I couldn’t wait to get my hands dirty. 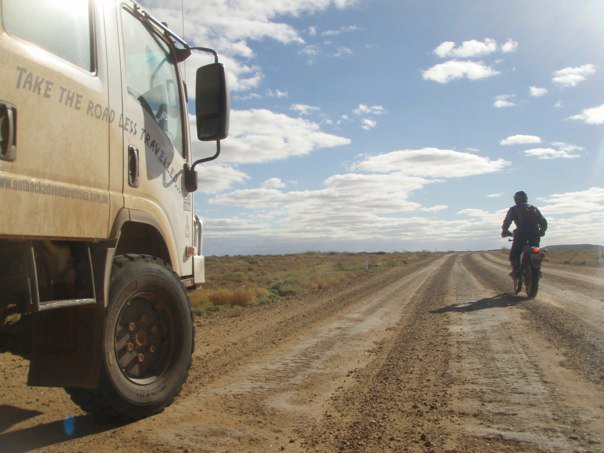 3. This is a pretty unique job that involves several unique skills sets. How does a man become a motorcycle expedition guide, learn the requisite skills, and find his way into this line of work?

Ultimately, it was my willingness to go to the end of the Earth (literally) that got me where I am.  My now-boss took a chance on a guy with lots of theoretical training but not much actual experience (hell, I had never been to Australia) and for that I’m still extremely grateful.  I think the fact that I had just come 10,000 miles for a chance to do what he did helped make the point that I was serious.

So, if you’re looking to score a job in extreme off-roading or adventure tourism:

But most of all:

4. This seems like a young man’s job. Is this something you can do until your golden years, and if not, what do you have planned for your second act?

Actually, my boss is almost 50 and he can out-ride, out-drive, and out-heave me all day.  In fact, many of our clients are in the 40-50 year old age range.  Despite the physical nature of what we do, experience is more valuable than the vivacity of youth.  I’m learning that’s actually the case for many things in life–Finesse triumphs over Force in most scenarios, and extreme overlanding is no exception.

That being said, my Australian visa will expire after the year’s end so I’ll be moving on to a new enterprise by 2012.  I’ll try to keep riding or pursue my other passions professionally as I take the “long way” home to America through Asia, India, and the Middle East.  After that I hope to make something of the stories I’ve created and collected by finding a way to make a living as a writer. 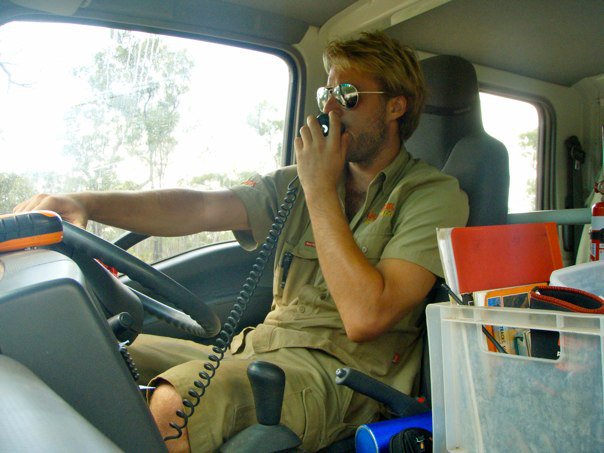 The drama.  Every tour could be made into a movie, and people would actually watch it.  Between the social dynamic of the group, the splashes, crashes, challenges and unbelievable backdrops we ride through, each trip is a surreal experience.  I wake up every morning with no idea of what’s going to happen that day–only that it’s going to be epic.  I love that.  Even the disasters have their up-sides; once the dust settles there’s always a great story left behind.

It also gives you plenty to talk about to chicks at the bar. 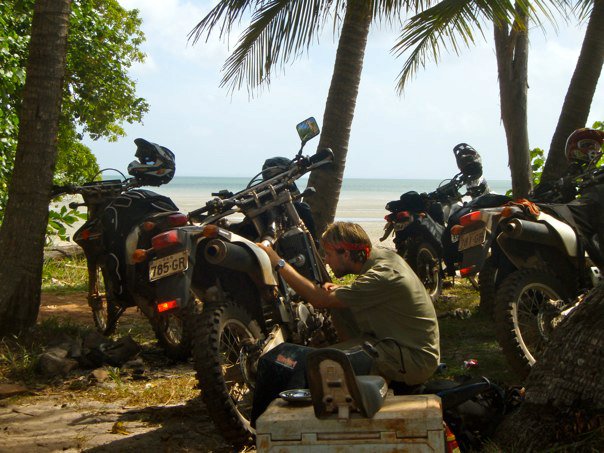 Repairing bikes at the Northeastern Most Point of Australia.

When we’re touring or racing, the work is literally nonstop.  If I’m awake, I’m on-duty.  It’s fun at first and makes the days whip by, but after a couple consecutive months it wears on you.  While clients are lounging around the campfire enjoying post-ride beers and laughs, I might have ten motorcycles that need oil changes, tires fitted, handlebars straightened, or all the above.

In that sense it’s military style–when you’re away working, you’re away working.  You don’t go home at night to watch The Office with your girlfriend or anything.  But when you do get time off it’s not just a weekend–it’s weeks.  The tour season is from about April to October, so our staff has the Australian summer to pursue other endeavors.  Personally I don’t have a special lady or family in this country, so I haven’t seen my clan in quite awhile, but my boss has a big flock and he does a good job of making the most of his time with them when he’s off. 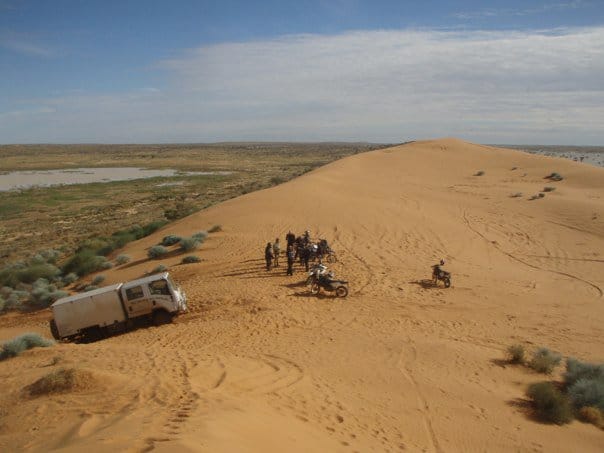 The crew after scaling “Big Red,” a famous dune in the Simpson Desert.

People don’t seem to realize the scale of what we do.  A three-week motorbiking trip isn’t like leaving your house and going for a ride every day for three weeks…it’s an endurance event, breaking camp in the morning, five to eight hours of grueling riding, then setting up camp at night, every single day.  Plus whatever crashes, injuries, and mishaps take place between Point A and Point B.  And while our clients come out for a week or three then fly home, we have another group to take out as soon as we see them off and repair our equipment.

For the last three months of my employment I’ve been on-duty, and sleeping in a “swag” (Australian mini-tent the size of a coffin) every night, and I’ll do so again until the season ends in November.

Non-Aussies tend to not realize how vast and empty this country is.  It’s near the size of the Continental U.S., except America has over 300 million people in it while Australia has less than 25 million.  When we cross the nation we leave the last traffic lights on Day 1 and don’t see another until we hit the other coast on Day 17. 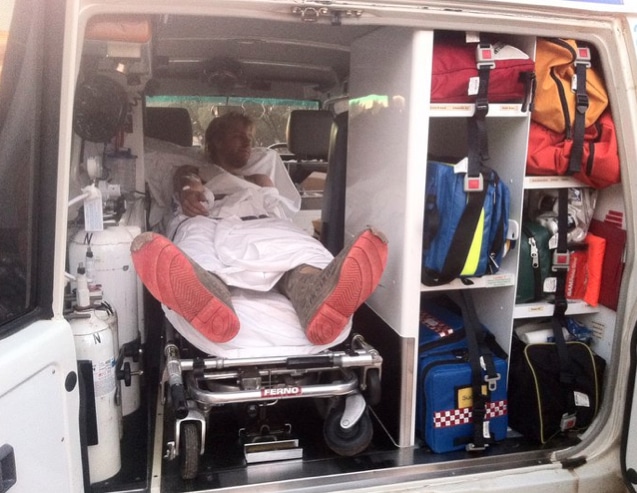 In the back of an ambulance after a collision with a kangaroo.

“Fortune favors the brave.”  I say that to myself every single time I face a decision.  That motto’s brought me to some amazing places, but it’s also cost me a lot of destroyed equipment and hospital bills–because that “fortune” doesn’t always manifest itself the way you imagine.  If you’re looking to take on an extreme sports lifestyle, you’ve got to be committed enough to take the bad times with the good and learn from your mistakes. 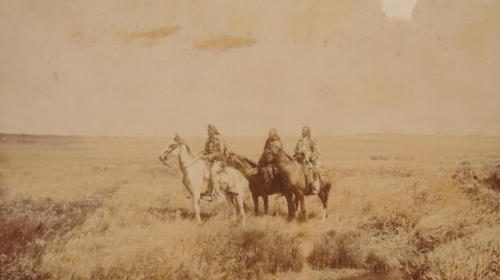 Podcast #822: Developing the Warrior Within